KINSHASA, Congo  — Congo’s leader is blaming a deadly Ebola virus outbreak for the last-minute decision to keep an estimated 1 million voters from the polls in Sunday’s long-delayed presidential election, claiming it would be a “disaster” if someone infects hundreds of others. Protests exploded for a second day on Friday in response as health workers suspended efforts and warned that new cases could rise.

In an interview with The Associated Press, President Joseph Kabila contradicted his own health officials and experts with the World Health Organization, who have said precautions were taken in collaboration with electoral authorities so people could vote. Those include tons of hand sanitizer — Ebola is spread via infected bodily fluids — and the screening of all voters entering polling stations.

Kabila in his comments Thursday evening claimed that Ebola could spread as people use voting machines, which require tapping on a touchscreen to select candidates. A polling station could have 500 to 600 voters and “this assumes that a lot of people will be contaminated,” he said. Health officials have said people would sanitize their hands before and after voting.

Up to 5 million of Congo’s 40 million voters might not be able to cast ballots on Sunday, opposition candidate Martin Fayulu said.

Until this week, the Ebola outbreak declared on Aug. 1 had been a challenge but not a barrier to the election. Voting is now delayed in the cities of Beni and Butembo — but not in other communities with confirmed Ebola cases — until March, long after the inauguration of Kabila’s successor in January. Residents had largely supported Kabila in past elections but sentiment has turned in recent years amid persistent insecurity.

This latest delay in an election meant to occur in late 2016 has angered both residents and the opposition, which accuses the government of trying to ensure that Kabila’s preferred successor is elected. Many Congolese believe Kabila will continue to wield power behind the scenes and protect his assets in a country with vast mineral wealth. 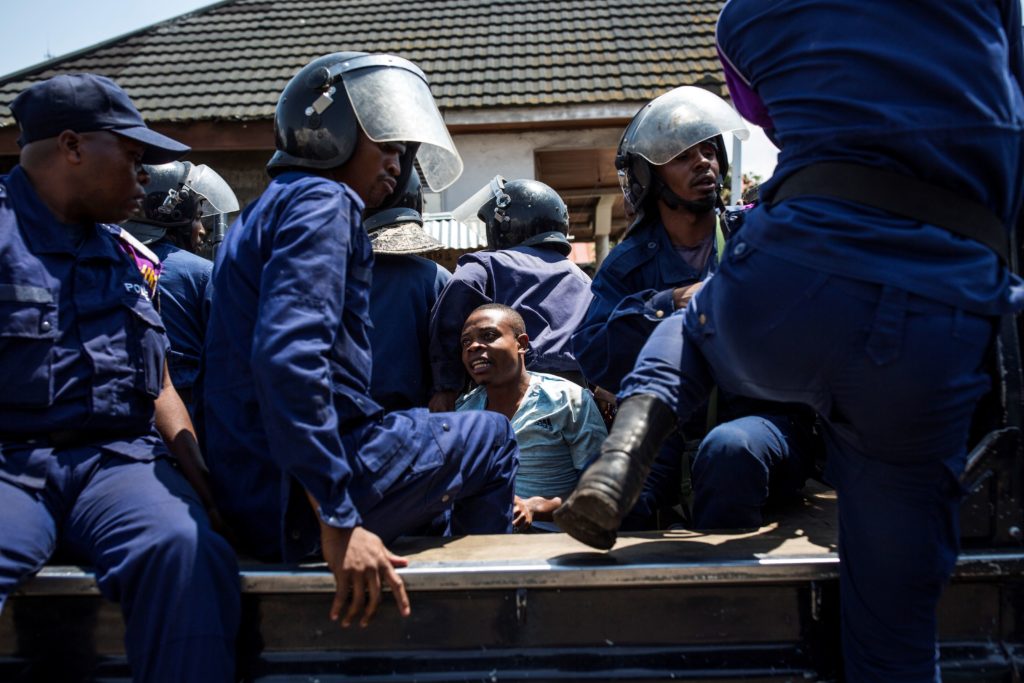 Congolese National Police arrest a man in Goma, on Dec. 27, 2018, during a demonstration against the postponement of the general elections in this area because of the Ebola outbreak. Photo by Patrick Meinhardt/AFP/Getty Images

Protests broke out in Beni again on Friday, with hundreds of people demanding the right to vote on Sunday with the rest of the country. Police and the army used live ammunition and tear gas to disperse the marchers who barricaded streets.

“We don’t fear Ebola,” one of the marchers, Claude Vianney, told the AP. “I know that if you wash your hands, the Ebola virus will be killed.” He added: “We are furious, as you can see. Why does Kabila keep mocking us?”

On Thursday, some protesters attacked an Ebola response center and sent 21 patients fleeing. While the health ministry said most had tested negative for the virus and 11 people had returned, the vandalism was the latest setback in efforts to contain the second deadliest Ebola outbreak in history. Nearly 600 cases have been reported, with more than 350 confirmed deaths.

The uproar over the voting delay has “badly disturbed” Ebola response work in Beni and Butembo, Congo’s health ministry said. Health teams could barely deploy on Thursday and no Ebola vaccinations could be carried out, it said.

The Oxfam aid organization said it was forced to suspend its Ebola response work. Acting country director Raphael Mbuyi called the situation “extremely worrying” because previous suspensions have led to a spike in new cases.

Mbuyi added, however, “it’s not surprising that people who have had their votes taken away at the last minute are frustrated and going to the streets. These people deserve to have their say as well.”

There is “no further reason” to prevent Sunday’s election, Kabila told the AP, adding: “Rest assured, there will be peace.” Police will be there to secure the population, he said.

He dismissed opposition allegations that campaigns had faced restrictions, including blocked flights and assaults on supporters.

Opposition candidate Martin Fayulu told the AP that up to 5 million of Congo’s 40 million voters might not be able to cast ballots on Sunday, claiming that voting machines had yet to be delivered to some areas. His opposition coalition has urged people to remain calm.

The former interior minister is under an EU asset freeze and travel ban for obstructing Congo’s electoral process and for a crackdown against protesters angry over the delayed vote. The EU prolonged the sanctions this month.

Kabila, when asked what advice he had for his successor, replied: “The biggest recommendation is that he listen to the voice of the Congolese and not follow that of the United States, Europe or elsewhere.”

Congo has resisted what it considers international meddling, vowing to fund the election itself. Western observer groups are notably absent.

“I have already said that Congo is not a beggar country,” Kabila said.

Responding to Ebola in Congo is hard work, but made that much harder by violence