Protests against Charlie Hebdo turn violent in Niger and Pakistan

At least five people were killed in Niger during protests against the French satirical publication Charlie Hebdo on Saturday, authorities said, raising the two-day death toll in the violent demonstrations in the country’s capital to ten.

Police fired teargas at crowds in the Niger capital of Niamey, as Muslim youths threw stones and set fire to churches, Reuters reported.

“They offended our Prophet Muhammad, that’s what we didn’t like,” Amadou Abdoul Ouahab, who took part in the demonstration, told Reuters. “This is the reason why we asked Muslims to come, so that we can explain this to them, but the state refused. That’s why we’re angry today.”

President Mahamadou Issofou of Niger said the five people killed on Saturday were civilians and promised an inquiry into the violence.

“Those who pillage religious sites and profane them, those who persecute and kill their Christian compatriots or foreigners who live on our soil, have understood nothing of Islam,” he said in a televised appearance.

Marches remained peaceful in other Western African countries, including demonstrations held in Mali, Senegal and Algeria. 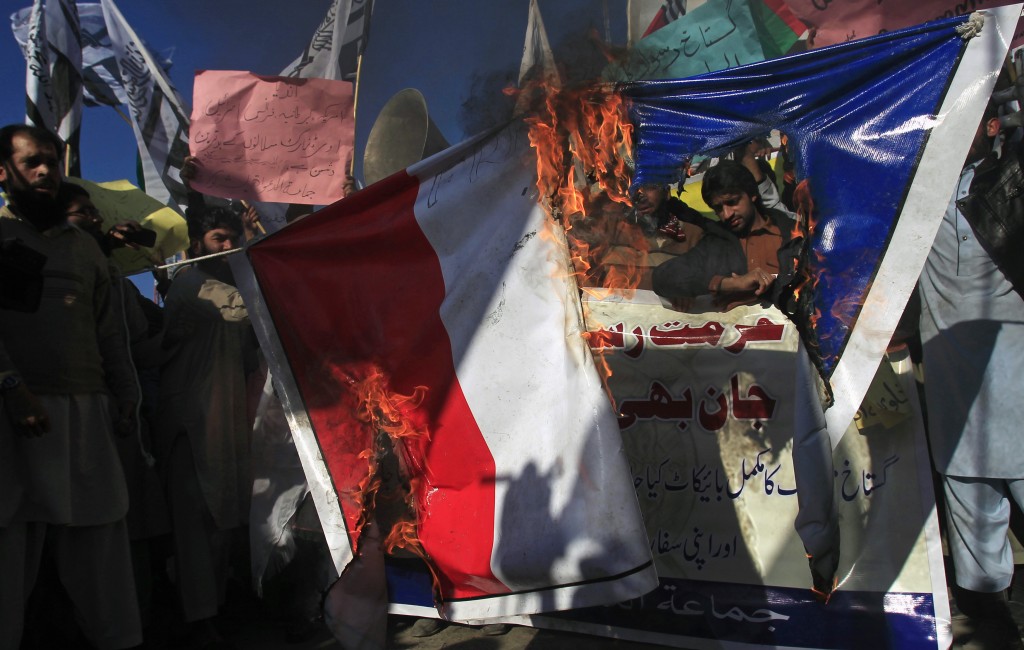 But protests against the French weekly newspaper’s cartoon depictions of the Prophet Muhammad turned violent in Pakistan on Friday, with several injuries reported.

In Karachi, four people, including two journalists, were shot. According to the New York Times, riot police officers responded to rock-throwing demonstrators with tear gas, water cannons and gunfire.

“Freedom of speech should not be used to hurt religious sentiments of any community,” Pakistani Prime Minister Nawaz Sharif said in a statement on Thursday. “Publication of provocative material should be discouraged by the international community,” he said.

In Afghanistan, President Ashraf Ghani spoke out against the cartoons in a press release on Saturday, condemning “in strongest possible terms” the caricature of the Prophet Muhammad. Ghani called the cartoons blasphemous and “utterly an irresponsible act.”

On Wednesday, Charlie Hebdo published its first issue since two gunmen stormed the weekly’s newsroom and killed 12 people on Jan. 7.

The issue showed a cartoon depiction of Muhammad holding a sign that read “Je suis Charlie.”

Left: People gather next to rubble and a hotel set on fire during a demonstration against French weekly Charlie Hebdo's publication of a cartoon of the Prophet Mohammed in Niamey, Niger on Jan. 17.  Credit: BOUREIMA HAMA/AFP/Getty Images