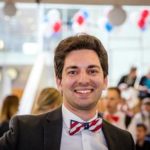 But amid the mounting tensions, public opinion polls in Russia show that support for Putin is rising.

The rally ‘round the flag effect of supporting political leadership during an international crisis will likely be short-lived.

Historical data shows that diversionary wars — fighting abroad to draw attention away from problems at home — have rarely worked for Putin.

Historical data shows that diversionary wars — fighting abroad to draw attention away from problems at home — have rarely worked for Putin.

Daring and expensive military adventures will, over time, decrease the Kremlin’s popularity, history also tells us.

As a scholar of Russia and public opinion, I know that war ultimately requires an enormous amount of public goodwill and support for a political leader — far more than a brief spike in popularity can ensure. 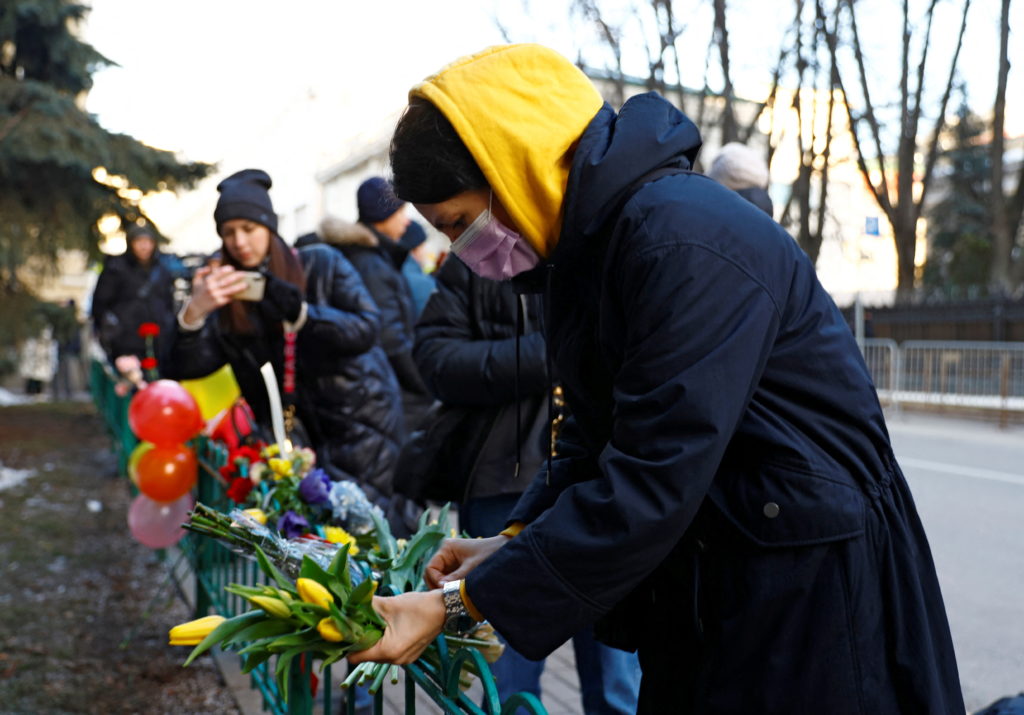 A woman places flowers outside the Ukrainian embassy in Moscow after Russia launched a massive military operation against Ukraine on Feb. 24, 2022. Photo by REUTERS/Evgenia Novozhenina

A shift in Putin’s public approval

Russia’s military buildup along the Ukrainian border over the last few months coincides with a steady rise in Putin’s popularity.

Approximately 69% of Russians now approve of Putin, compared to the 61% who approved of him in August 2021, according to Russian polling agency the Levada Center. And 29% of Russians disapprove of Putin, down from 37% in August 2021. The polling group is the leading independent sociological research organization in Russia and is widely respected by many scholars, including myself.

The Russian public largely believes that the Kremlin is defending Russia by standing up to the West.

Putin has enjoyed relatively high approval ratings since he first became president in May 2000. His popularity averaged 79% in his first 20 years in office. Some political scientists attribute this trend to “Putin’s personal charisma and public image” and Russians’ preference for a “strong ruler.”

Other experts argue that Putin’s approval ratings are actually related to Russians’ indifference and symbolic trust in political leaders.

More than 13,000 people have died fighting in the Donbas region, as it is known, since 2014, when Russian loyalists seized power in the Ukrainian cities of Donetsk and Luhansk.

“Every indication is that Russia is continuing to plan for a full-scale attack of Ukraine,” NATO Secretary-General Jens Stoltenberg said on Feb. 22.

But few people in Moscow heard the drumbeat of war until mid-February.

Russian state media has issued continuous denials that the Kremlin was preparing for war with Ukraine.

The cascade of fake news is intended to normalize clashes between Russia and Ukraine.

Russian news shows started circulating lies about the security situation in Ukraine around Feb. 21. Anchors on the state television Channel One, for example, have said that Ukraine is forcing its own citizens in the Donbas to flee.

Actually, separatist authorities in Luhansk and Donetsk had announced their own plans to evacuate residents from the two breakaway regions to Russia. The United States has said that false warning about Ukraine attacking the separatist regions could help Putin publicly justify the invasion.

The cascade of fake news is intended to normalize clashes between Russia and Ukraine.

Putin’s Feb. 21 televised speech addressed the dangers of Ukrainian nationalism. He also stressed Russians’ and Ukrainians’ shared history. This presidential address could serve to galvanize the Russian public to back Putin’s military aspirations. 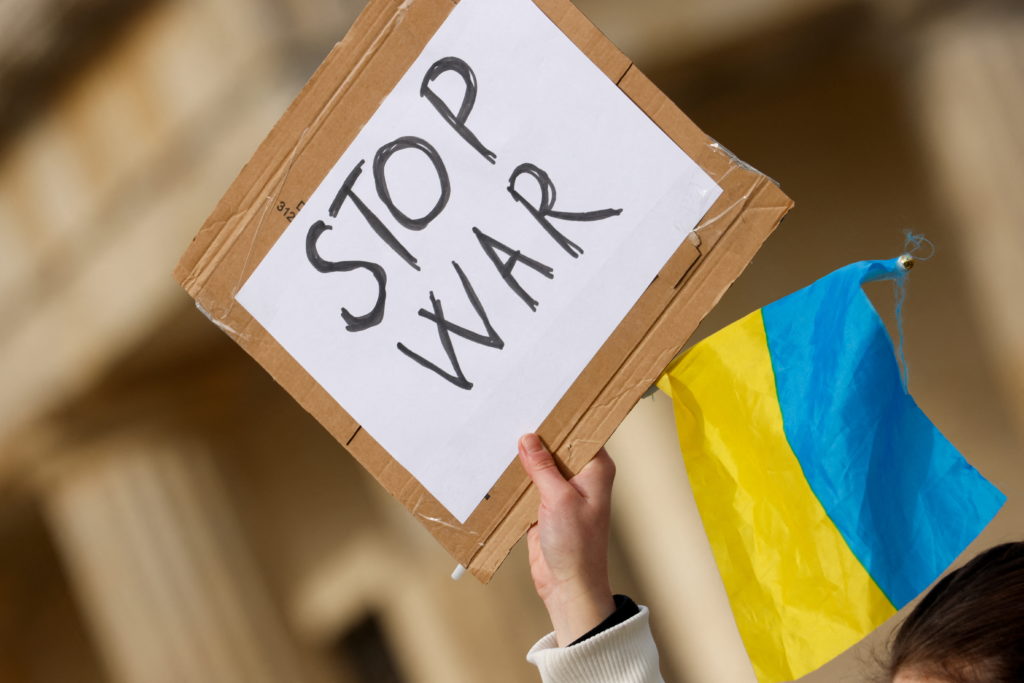 A demonstrator in Germany holds a sign during a protest at Brandenburg Gate, after Russian President Vladimir Putin authorized a military operation in eastern Ukraine on Feb. 24, 2022. Photo by REUTERS/Michele Tantussi

About 38% of Russians did not consider war with Ukraine a real possibility as of December 2021, according to Levada Center polling. Another 15% completely ruled out the possibility of armed conflict.

Approximately 83% of Russians report positive views on Ukrainians. And 51% of Russians say that Russia and Ukraine should be independent, yet friendly, countries.

The popular narrative is that Russia is a besieged fortress, constantly fending off Western attacks.

Half of Russians blame the current crisis on the U.S. and NATO, while 16% think Ukraine is the aggressor. Just 4% believe Russia is responsible.

War is ultimately an unpopular strategy

Putin’s approval ratings reached an all-time high of 89% less than one year after Russia forcibly annexed Crimea, a Ukrainian peninsula, in 2014.

The largely bloodless conquest resulted in “collective euphoria” among Russian people, who have often vacationed along Crimea’s scenic coastline.

But Russia’s other recent military actions, including its 2008 invasion of Georgia and its intervention in the Syrian civil war in 2015, were not met with the same enthusiasm.

Public support dropped following both of these military interventions.

Now, Russians have not expressed the same personal connection to the Donbas that they felt for Crimea.

Polls conducted since the annexation of Crimea in 2014 consistently show that most Russians support the independence of the two self-declared republics in the Donbas. But they do not see them becoming a part of the Russian Federation.

I believe the unfolding conflict in Ukraine could result in countless body bags of Russian soldiers returning to Moscow.

Russia’s ensuing military intervention in Ukraine may prove costly for Putin domestically, undermining his legitimacy and forcing him to spend more resources on quashing internal dissent.

U.S. and European sanctions could result in a subsequent economic fallout that will overwhelmingly hurt Russians’ pocketbooks — and further erode Putin’s support.

Arik Burakovsky is Assistant Director of the Russia and Eurasia Program at The Fletcher School of Law and Diplomacy at Tufts University. His research interests include the political role of the international media, public and elite opinion, soft power, public diplomacy, and U.S.-Russia relations. While pursuing his M.A. in Law and Diplomacy from The Fletcher School, Arik interned in the Public Affairs Section at the U.S. Embassy Moscow and studied the Polish language and culture as a Boren Fellow at the University of Warsaw in Poland. He has twice served as Resident Director for the ROTC Project GO intensive summer Russian language program in Narva, Estonia, which is conducted in cooperation between the University of Pittsburgh and the University of Tartu Narva College. Arik received his B.A. in Political Science and International Relations at the University of California, San Diego.