The G20 summit on July 7-8 comes amid tensions over trade, climate, and refugee policy and increased uncertainty over the U.S. commitment to multilateral institutions.

The annual summit of the Group of Twenty (G20), a gathering of the world’s largest economies, has evolved into a major forum for discussing the most pressing global issues. One of the group’s most impressive achievements was its robust response to the 2008 global financial crisis, but some analysts say its cohesion has since frayed.

The July 2017 summit in Hamburg, Germany, is the first for U.S. President Donald Trump, who has already clashed with many of the group’s members over trade, climate, and refugee policy. While the group’s meetings will be closely watched, bilateral meetings taking place on the summit’s sidelines are of particular interest this year, especially because Trump and Russian President Vladimir Putin are scheduled to meet for the first time.

What is the G20 summit and who will be attending?

Every year the heads of G20 members meet to discuss a wide range of issues, with a focus on economic and financial matters, and coordinate policy when possible. Lower-level meetings among finance ministers and other policymakers take place in the run-up to the leaders’ summit. The G20 is not a permanent institution with a headquarters, offices, or staff. Instead, its leadership rotates on an annual basis among its members, its decisions are made by consensus, and implementation of its agenda depends on the political will of the individual states.

In 2017, the rotating G20 presidency belongs to Germany, which will host the two-day leaders’ summit in Hamburg starting July 7. In addition to Trump and Putin, high-profile leaders in attendance are expected to include German Chancellor Angela Merkel, Chinese President Xi Jinping, and newly elected French President Emmanuel Macron. Trump’s aides said a week before the meeting that they had no specific agenda for the Putin talks. That meeting comes as Trump is under domestic political pressure for alleged ties to Russia, which, U.S. intelligence agencies say, mounted cyberattacks on American electoral systems ahead of Trump’s election.

What’s on the agenda?

The G20 initially focused largely on economic policy, but it has expanded its ambit in recent years. Ahead of Hamburg, Merkel stressed the theme of a “networked world,” and the German government laid out a broad agenda.

Topping the list is financial regulation, and in particular addressing what Germany calls “harmful tax competition” between countries—the widespread use by companies and individuals of low-tax countries as tax shelters, as was dramatized by the 2016 Panama Papers leaks. The G20 is also pursuing policies, including information-sharing initiatives, to combat corruption and money laundering.

Merkel has made ties with Africa a focus of the summit. Her government has presented a “Compact with Africa” initiative that would involve G20 nations bringing private investment, job growth, and new businesses to African states that have committed to economic reforms.

Other trade and economic-growth plans are also high on the agenda. Germany wants to reaffirm a global commitment to free trade and discuss how to implement the UN’s “2030 Agenda for Sustainable Development,” a set of far-reaching goals for eliminating poverty around the world.

Beyond purely economic measures, Germany wants to recommit the G20 nations to meeting their carbon-reduction goals under the 2015 Paris Agreement on climate change, although the U.S. withdrawal from the accord makes it a notable outlier. Germany also aims to expand research and development on combating infectious diseases, and coordinate responses to the migration and refugee crises in Africa, Europe and the Middle East. 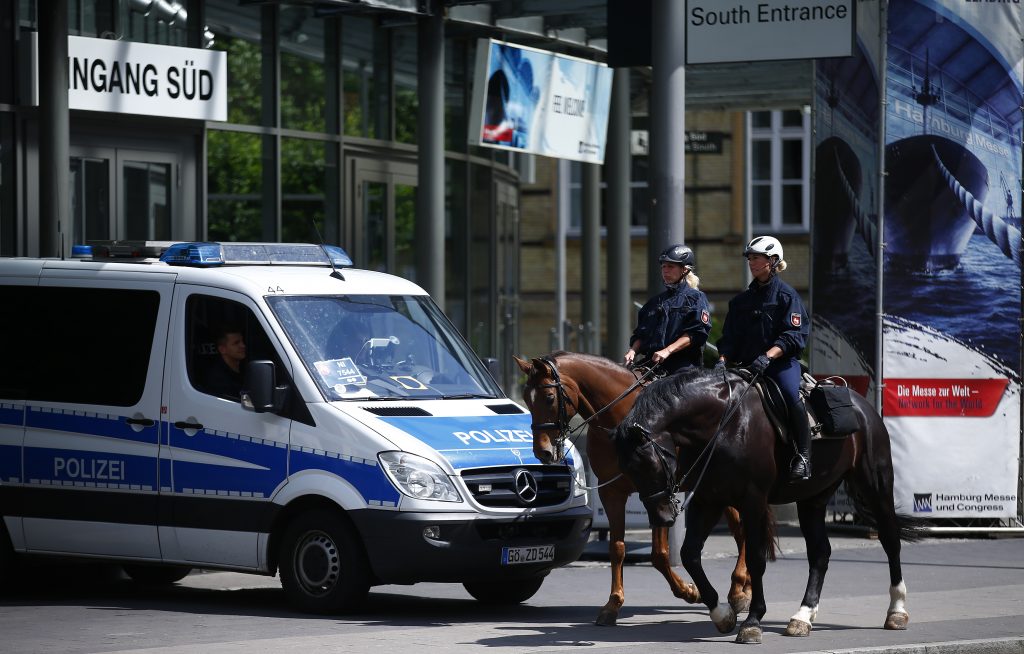 Mounted police patrol outside the Hamburg Messe on July 3 before the upcoming G20 summit in Hamburg, Germany. Photo by Hannibal Hanschke/Reuters

What are the main points of contention?

Much of the uncertainty surrounding the 2017 summit stems from President Trump’s reorientation of U.S. foreign policy, which has placed the United States at odds with much of the rest of the G20, and especially with its host, Germany.

Tensions have also arisen between Turkey and its German hosts, most recently over Germany’s denial of a request by Turkish President Recep Tayyip Erdogan to address Turks at a rally in Hamburg. Meanwhile, embattled British Prime Minister Theresa May will face many of the European partners with whom she is negotiating her country’s exit from the EU. This comes shortly after elections that significantly weakened her position.

What is the importance of the G20?

Taken together, the nations of the G20 account for around 80 percent of global GDP, nearly 75 percent of all global trade, and about two-thirds of the world’s population.

The group was formed in 1999, in the wake of the Asian financial crisis, as a new forum that would unite finance ministers and central bankers from the world’s largest established and emerging economies. A decade later, at the height of the global economic crisis, the G20 was elevated to the leaders’ level, to include heads of state and government. President George W. Bush hosted the first such gathering in November 2008. Many experts credit the G20 with quick action that, in the words of CFR’s Stewart Patrick, “rescued a global financial system in free fall.” In 2008 and 2009, G20 nations agreed to spending measures worth $4 trillion to revive their economies, rejected trade barriers, and implemented far-reaching reforms of the financial system.

Since then, Patrick and other observers say, the G20 has struggled to achieve similar success on its goals of coordinating their monetary and fiscal policies, achieving higher growth, and rooting out corruption and tax evasion. Geopolitical analyst Ian Bremmer has argued against the G20’s utility, saying that there is instead a “G-Zero” world—one in which countries go it alone or form ad hoc coalitions to pursue their interests.

How has the Trump administration approached other summits?

In his first six months, Trump has unsettled American allies due to his sharp shift in the U.S. approach to multilateral institutions. Throughout his presidential campaign, he criticized members of the North Atlantic Treaty Organization (NATO) for spending too little and called the alliance “obsolete.” At his first NATO summit, in May 2017, he conspicuously declined to back the organization’s Article V provision, which commits each member to the bloc’s common defense. At the same time, some experts have credited Trump with helping to spur an increase in defense spending by NATO states that the United States has long sought. NATO Secretary-General Jens Stoltenberg said on June 28 that NATO states planned to increase their defense spending by 4.3 percent this year. (Some of the increases were in place before Trump’s election in November.)

Trump’s first G7 summit, which was also in May, further demonstrated his willingness to defy the United States’ traditional allies. There, despite heavy pressure from European leaders, he refused to commit to a common climate policy. Analysts say he also strained relations with German policymakers, and Merkel said that Europe could no longer “fully rely” on the United States.

This backgrounder first appeared on June 30 on the Council on Foreign Relations’ website.

Left: Windows of a German department store are covered with wooden boards before the upcoming G20 summit in Hamburg, Germany, July 7-8. Photo by Fabian Bimmer/Reuters