The story of Ebola in Nigeria is an unusual and frankly rare one about things going right somewhere in Africa, albeit with fingers crossed for fear that it could quickly change.

The numbers are remarkable: just 21 cases of Ebola and eight deaths, in a nation of 170 million, according to the latest World Health Organization report. Compare that to Liberia, with a population of just over 4 million, which has suffered nearly 1500 deaths so far.

Nigeria’s achievement truly hits home for a television crew working “in the trenches” of a country the U.S. Central Intelligence Agency describes as “hobbled by … insecurity and pervasive corruption.”

The first hint of this came while making what normally are mundane travel arrangements. Would we like a police escort for the ride from the airport to our hotel in the Niger Delta city of Port Harcourt or for the rental car we’d need the next day? This region, which displays no dividend above ground of its enormous oil wealth below, has been beset by civic unrest and kidnappings. We opted to squeeze the security escort into our rental car for the day, a quiet, diminutive chap with a rusty weapon but with the critical epaulets on his shoulders of the Nigerian Police Force. Coincidentally or not, our day in Port Harcourt went without hassle as we roamed the streets and markets in pursuit of our pictures.

However, in the commercial capital, Lagos — where we spent most of the week and without escort — the security apparatus was the problem. Not five minutes after setting up the tripod and camera anywhere in this sprawling city, it seemed, men in uniform would turn up to announce that this was not allowed. If only we were just shooed away. Three times in two days, we were detained as our driver was verbally assaulted with a litany of (fictitious) accusations about having the “wrong” permits and papers. It took the chance intervention of a passing diplomat on one occasion and a call to a politically influential contact on another to release us without harm to our persons or wallets. Until the next police roadside check point. 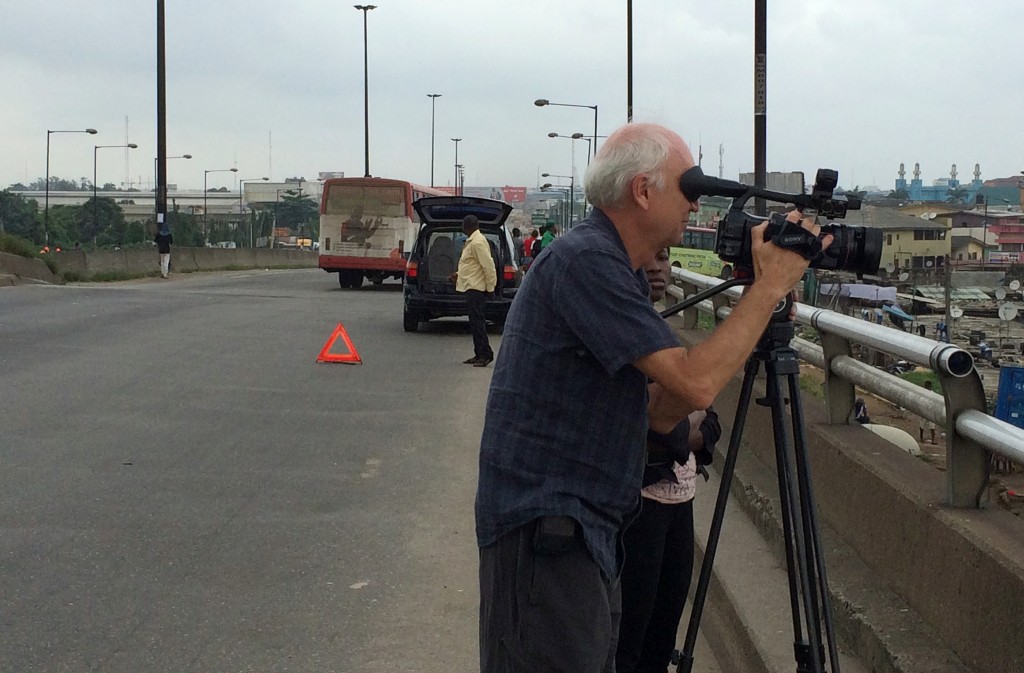 “How is your weekend?” this officer inquired. “Great? We would like to have a good weekend also.” It was a cue our driver took swiftly, thrusting 200 Naira (about $1.20) into the cop’s hand. “God bless you,” he responded as we took off.

On our way out, I was greeted at the entrance to the airport by a uniformed policeman, who guessed (correctly) at my Indian origin and then asked for a tip. I politely declined, abruptly ending this unusually friendly encounter. A few minutes later, we were approached by an airport employee on the way to the lengthy line for Ebola screening, required for everyone coming into and leaving the country.

“It is a very long queue,” this man informed us. But for a small tip, he could arrange for us to be escorted as VIPs to the head of the line. We opted to stick it out in the long queue, if only to observe how the airport health screeners were coping with the throngs of travelers at a peak hour. Through pushing and shoving in crowded lines of harried passengers and loud arguments with some of the instant VIPSs who showed up at the head of the line, airport health workers doggedly checked each person’s temperature and Ebola screening form before sending them on. A young doctor stood guard behind the screening counters sending back passengers who every now and again attempted to skip the process as they rushed to catch their flights.

Through all the hassles and commotion that mark a day in the life of Nigeria, the Ebola mobilization has been textbook thorough like no one here can recall in any government-led campaign.

Babatunde Fashola, the governor of Lagos state, which includes the city of 20 million, offers a commonly-heard explanation:

“On this kind of job, fear is always healthy,” he said.