More than two hundred years after Western explorers uncovered the ancient city of Petra in the present-day country of Jordan, researchers have discovered another hidden ruin buried beneath the UNESCO World Heritage site.

Using satellite imagery and old-fashioned archaeology, researchers Christopher A. Tuttle and Sarah Parcak were able to pinpoint what may be a ceremonial temple, located in an unobtrusive section of the Petra Archaeological Park near the city center, where thousands of tourists flock each year.

Tuttle and Parcak, both American archaeologists, published their findings in May in the Bulletin of the American Schools of Oriental Research.

The duo described using a combination of Tuttle’s archaeological expertise on Petra, accumulated during multiple stints in the city during the last 15 years, and Parcak’s skills with satellite imagery, which first helped define the underground characteristics of the ruins in 2013 in an area once inhabited by the Nabataean people.

The use of drone photography helped buttress their original findings before Tuttle and his team made more discoveries during ground surveys.

“A simple equation drove our research design,” the two wrote in the study. “To what extent did the Nabataeans alter the landscapes in and around Petra?” 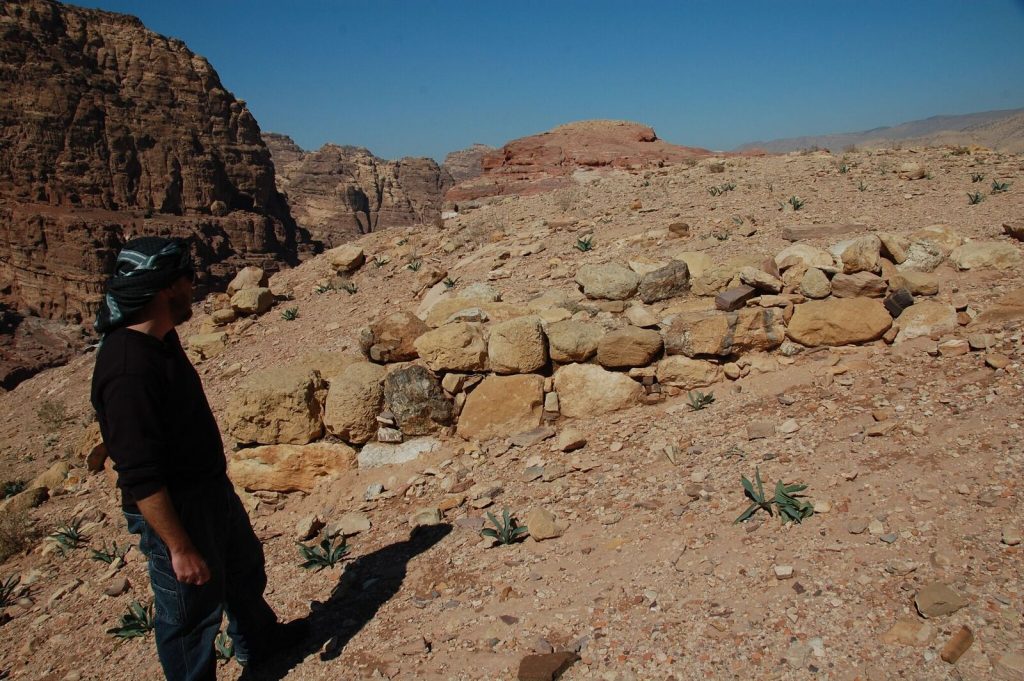 Archaeologist Christopher A. Tuttle examines a recently discovered site in the ancient Jordanian city of Petra. Photo by Q. Tweissi

Tuttle, who is the executive director of the Council of American Overseas Research Centers, told the PBS NewsHour the discovery may not have happened at all if the team did not identify several columns poking up through the earth, which were likely revealed by illegal digging on the site sometime in the past.

Much of the site is buried beneath several centimeters of sand and rock and was not visibly apparent, given its proximity to highly-trafficked tourist areas about a half-mile away.

Tuttle said that after identifying the site from the air, he and a team of researchers combed the landscape and found pottery and other artifacts from various historical time periods. Some of the artifacts date back to approximately 150 B.C., which is around the time scientists believe Petra was first formed as a caravan trade center between the Red Sea and the Dead Sea.

Petra is well-known for the red sandstone constructs that were carved from the natural landscape and featured in movies like Indiana Jones. But much of Petra consists of buildings built from the ground up, like those in the new discovery.

Without an archaeological dig, it would be difficult to know even the general date of the site, Tuttle said. But what is more overtly notable about the venerable structure are its decorative facade, stairway and man-made platforms that “took an enormous amount of effort” — details that the team found through high-resolution satellite imagery.

“That implies to us that it was for some form of public display,” Tuttle said. “It’s very possible that this is a religious site.” 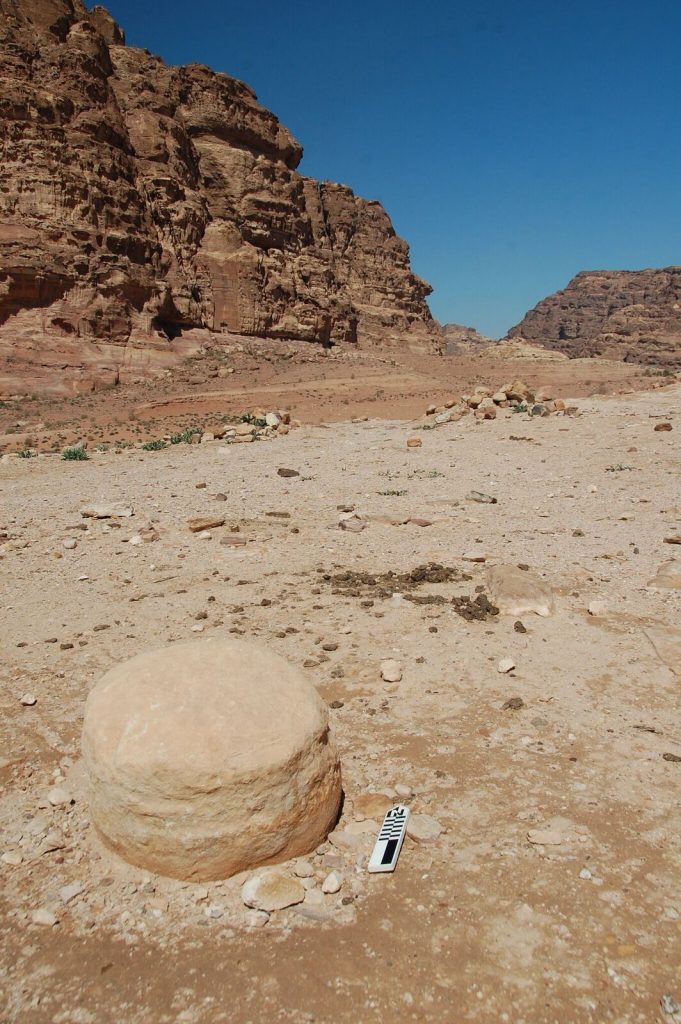 A sandstone column drum inside structure helped archaeologists identify the site. The columns were likely dug up illegally sometime in the past. Photo by Christopher A. Tuttle

In the study, the archaeologists noted the site’s architecture and the time and effort that it must have taken to assemble the “massive” structure, which measures 181 feet by 161 feet. A smaller platform sits nearby.

“These orientation relationships, architectural and construction styles and pottery scatters all help to suggest that the platform was built when Petra was flourishing as the capital city of the Nabataean kingdom,” Tuttle and Parcak wrote.

Tuttle said while hundreds of thousands of people around the world visit Petra, only about 2 percent of the ruins have been uncovered in an area that covers more than 100 square miles.

“Most who visit the World Heritage site see but a tiny fraction of the total landscapes in and around the city,” the report said. “Given the complexities of the topography found in this extensive park, it is highly improbably that Petra has yet revealed all of its secrets.”

Left: Tourists visit the Petra in front of the treasury site July 9, 2007 not far from a newly discovered ruin. Photo By Muhammad Hamed/Rueters