Revulsion in Northern Ireland over riot, fatal shooting of journalist

LONDON — The dramatic riot in Londonderry last week was starkly reminiscent of the violence that plagued Northern Ireland for decades before the 1998 peace agreement. The result was both tragic and familiar: the death of a young journalist, apparently hit by a stray bullet.

Here are answers to some questions about the Thursday night riot:

HOW WAS THE JOURNALIST KILLED?

The riot started Thursday evening, after police in Northern Ireland moved into the Creggan housing complex in Londonderry, searching for weapons and members of dissident groups. They were pelted with gasoline bombs and other objects, and several armored police cars were set alight.

The riot attracted a crowd of residents and journalists. At one point, a gunman wearing a balaclava stepped out from behind a building, fired shots at the police and then took cover. No police were hit, but a bullet struck 29-year-old journalist Lyra McKee in the head, killing her.

McKee had been well known for writing about the struggles of growing up gay in Belfast and about the legacy of violence in Northern Ireland. Her funeral is scheduled for Wednesday in Belfast.

WHO IS RESPONSIBLE FOR HER DEATH?

A small group called the New IRA admitted responsibility Tuesday for the journalist’s death and apologized to McKee’s partner and family. The unusual apology may be seen as a response to the overwhelming public condemnation of the shooting and the nearly universal grief at McKee’s death.

The New IRA, which has been increasingly violent in recent years, does not accept the Irish Republican Army’s historic decision to lay down its arms and pursue a political settlement, a strategy that led to the signing of the 1998 Good Friday peace agreement. The New IRA believes challenging the British presence in Northern Ireland is the best way to achieve its longtime goal of a united Ireland.

WHERE IS THE POLICE INVESTIGATION NOW?

Two teenagers were arrested in the case last weekend but were released without being charged. A 57-year-old woman was arrested under the Terrorism Act on Tuesday morning but has not been identified or charged. Police have not said what role she is suspected of playing

IS THE ‘NEW IRA’ THE SAME AS THE OLD IRA?

No. The IRA that spearheaded decades of violence in Northern Ireland known as “The Troubles” was extremely well organized and had some international political support as well as overseas connections that provided weapons and explosives. The IRA and its political leaders Gerry Adams and the late Martin McGuinness declared a cease-fire in 1994 and, through its political wing Sinn Fein, helped bring about the 1998 agreement that set up a power-sharing government that includes those who want a united Ireland and unionists who want continued ties with the United Kingdom. 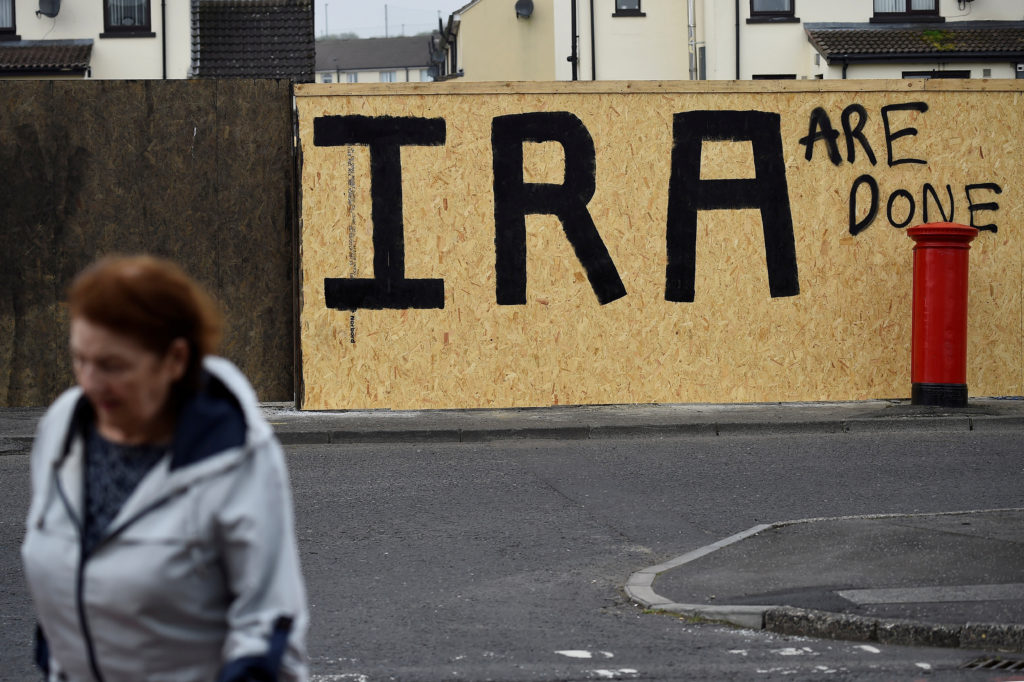 IRA graffiti painted over with a message declaring it a defeated army in the aftermath of the killing of 29-year-old journalist Lyra McKee is pictured in Londonderry, Northern Ireland. Photo by Clodagh Kilcoyne/Reuters

The IRA no longer functions as an armed movement, but some small dissident groups have not put down their arms. Of these, the New IRA has the highest profile, but they have very little political support in the general population.

WILL THE VIOLENCE GET WORSE?

The use of firearms aimed at police Thursday night marked an escalation, and follows a trend set in January when the New IRA was responsible for a car bombing that caused no injuries in Londonderry, which is typically called Derry by residents who resent the British presence.

The group also claimed responsibility for a series of letter bombs sent to the British mainland recently. British security services are spending more time and resources monitoring dissidents in Northern Ireland and have judged the threat of more terrorism in Northern Ireland as “severe.”

But the dissident groups do not seem to be gaining public backing and the apparently accidental killing of McKee seems to have sparked a backlash against violence.

IS BREXIT MAKING IT WORSE?

There is great uncertainty about whether a hard border will be put into place between Ireland and Northern Ireland when Britain leaves the European Union. After Brexit time, that now-invisible border will also become the border between the U.K. and the EU, which may necessitate identity and customs checks.

Politicians, academics and police have warned that any new border posts may well become targets for dissident groups — much like they were back in the violent “Troubles” era.

Left: Flowers are seen at the scene where the 29-year-old journalist Lyra McKee was shot dead, in Londonderry, Northern Ireland. Photo by Clodagh Kilcoyne/Reuters