HONG KONG — Riot police stormed several malls in Hong Kong on Sunday in a move to thwart more pro-democracy protests, though violence did break out when a knife-wielding man slashed several people and bit off part of the ear of a local pro-democracy politician.

There were calls online urging protesters to gather in seven locations to sustain a push for political reform following a chaotic day of clashes with police on Saturday, as the anti-government movement shows no signs of letting up after nearly five months.

Most of the rallies didn’t pan out Sunday as scores of riot police took positions, searching and arresting people, dispersing crowds and blocking access to a park next to the office of the city’s embattled leader, Carrie Lam.

Some small pockets of hardcore demonstrators were undeterred.

As protesters chanted slogans at the New Town Plaza shopping mall in Sha Tin, police said they moved in after some “masked rioters” with fire extinguishers vandalized turnstiles and smashed windows at the subway station linked to the mall. 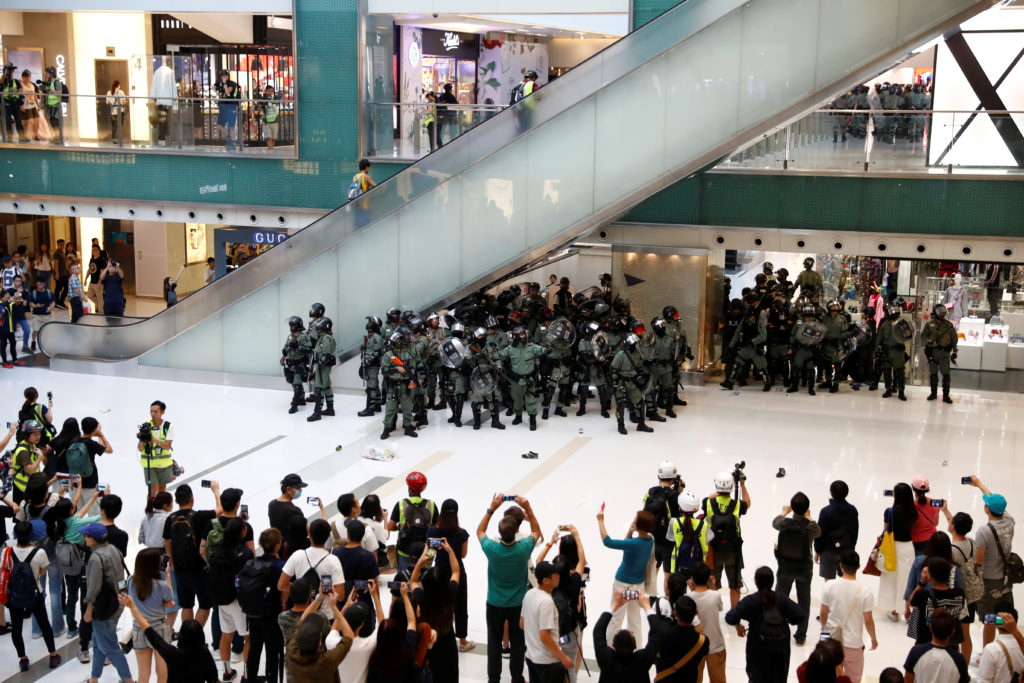 At two malls in the New Territories in the north, protesters vandalized shops, threw paint and attacked a branch of Japanese fast food chain Yoshinoya, which has been frequently targeted after the chain’s owner voiced support for the Hong Kong police.

Police rushed into one of the malls after objects were thrown at them. At another, protesters used umbrellas and cable ties to lock the mall entrance to prevent police from entering.

Later in the day, police stormed the Cityplaza shopping complex on Hong Kong Island after some protesters sprayed graffiti at a restaurant. A human chain by dozens of people was broken up and angry shoppers heckled the police.

On Sunday night outside Cityplaza, a man slashed several people with a knife and bit off part of the ear of a district councilor who was trying to stop him from leaving. Local media said the man told his victims that Hong Kong belongs to China, and that the councilor was a pro-democracy politician.

Television footage showed the man biting the councilor’s ear and being badly beaten up by a crowd after the attack, before police arrived. At least five people were injured, reports said.

The protests began in early June over a now-shelved plan to allow extraditions to mainland China but have since swelled into a movement seeking other demands, including direct elections for Hong Kong’s leaders and an independent inquiry into police conduct.

Lam has refused to budge on the demands, and instead has focused on measures that she said contributed to protesters’ anger, such as creating jobs and easing housing woes in one of the world’s most expensive cities. She invoked emergency powers last month to ban face masks at rallies, provoking further anger.

Her office said Sunday that Lam, currently in Shanghai, will head to Beijing on Tuesday. She is due to hold talks Wednesday with Chinese Vice Premier Han Zheng and join a meeting on the development of the Greater Bay Area that aims to link Hong Kong, Macao and nine other cities in southern China.

The ambitious project will help make it easier for Hong Kong residents to work and reside in mainland Chinese cities, and bolster the flow of people and goods, Lam’s office said in a statement.

But the plan has also sparked concerns over China’s growing influence over the territory. Many protesters fear Beijing is slowly infringing on the freedoms guaranteed to Hong Kong when the former British colony returned to Chinese control in 1997.

On Saturday, protesters for the first time attacked the Hong Kong office of China’s state-owned Xinhua News Agency in a show of anger against Beijing, a day after China warned of tightening its grip on the city to quell the unrest. The attack on Xinhua came after chaos broke out downtown, with police firing tear gas and protesters tossing gasoline bombs.

Xinhua in a statement strongly condemned the “barbaric acts of mobs” that had vandalized and set fire to the lobby of its Asia-Pacific office building. The Hong Kong Journalists Association also deplored “any act of sabotage against the media” and called for an end to violence against the press.

Protesters have frequently targeted Chinese banks and businesses. In July, demonstrators threw eggs at China’s liaison office in Hong Kong and defaced the Chinese national emblem in a move slammed by Beijing as a direct challenge to its authority.

On Friday, the Communist Party in Beijing vowed to “establish and strengthen a legal system and enforcement mechanism” to prevent foreign powers from sowing acts of “separatism, subversion, infiltration and sabotage” in Hong Kong.