Russia and Ukraine trade prisoners, each fly 35 to freedom

MOSCOW — Russia and Ukraine conducted a major prisoner exchange that freed 35 people detained in each country and flew them to the other, a deal that could help advance Russia-Ukraine relations and end five years of fighting in Ukraine’s east.

The trade involved some of the highest-profile prisoners caught up in a bitter standoff between Ukraine and Russia.

Ukrainian President Volodymyr Zelenskiy greeted the freed prisoners as they stepped down from the airplane that had brought them from Moscow to Kyiv’s Boryspil airport. Relatives waiting on the tarmac surged forward to hug their loved ones.

Most of the ex-detainees appeared to be in good physical condition, although one struggled down the steps on crutches and another was held by the arms as he slowly navigated the steps. 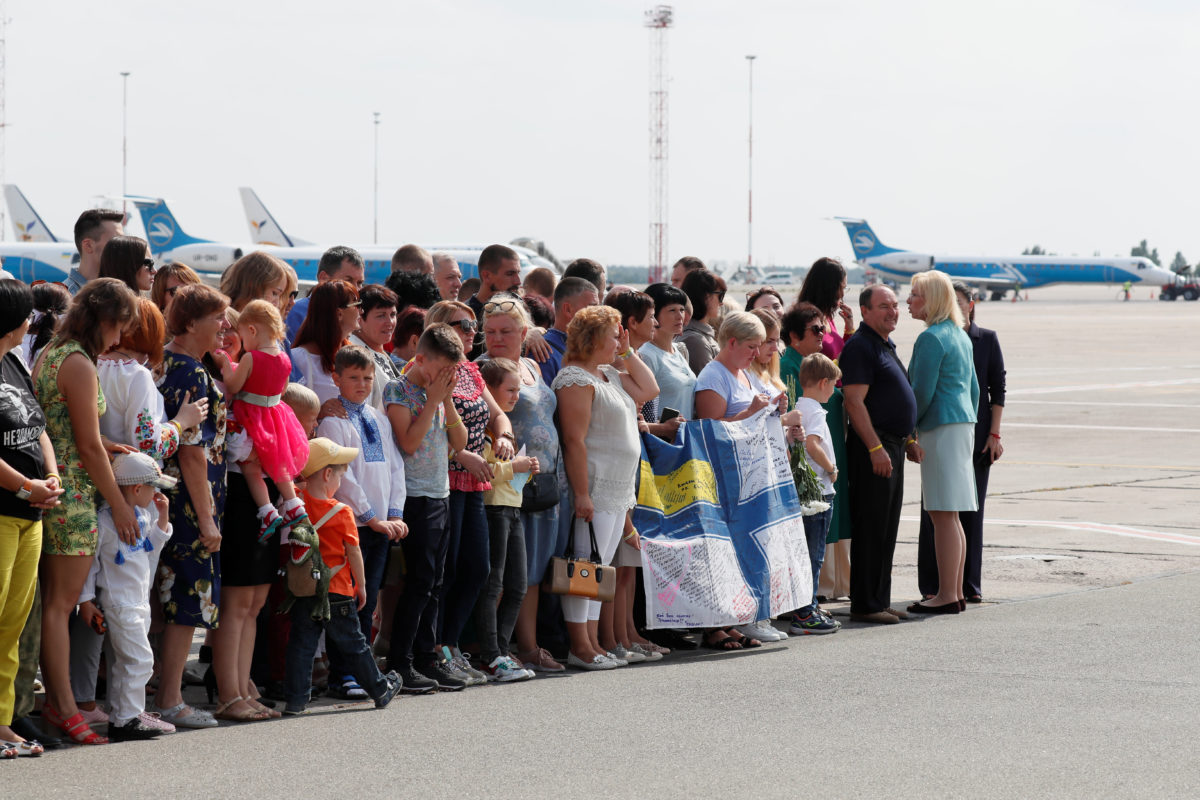 Relatives of Ukrainian prisoners, included in the Russia-Ukraine prisoner swap, wait for their arrival at Borispil International Airport outside Kiev, Ukraine September 7, 2019. Photo by Gleb Garanich/Reuters.

Among those Russia returned was Ukrainian film director Oleg Sentsov, whose conviction for preparing terrorist attacks was strongly denounced abroad, and 24 Ukrainian sailors taken with a ship the Russian navy seized last year.

“Hell has ended; everyone is alive and that is the main thing,” Vyacheslav Zinchenko, 30, one of the released sailors, said.

The prisoners released by Ukraine included Volodymyr Tsemakh, who commanded a separatist rebel air defense unit in the area of eastern Ukraine where a Malaysian airliner was shot down in 2014, killing all 298 people aboard.

Dozens of lawmakers urged Ukraine’s president not to make Tsemakh one of their country’s 35 traded prisoners.

Critics saw freeing Tsemakh as an act of submissiveness to Russia, but the exchange “allows Zelenskiy to fulfill one of his main pre-election promises,” Ukrainian analyst Vadim Karasev told The Associated Press

Zelenskiy, who was elected in a landslide in April, has promised new initiatives to resolve the war in eastern Ukraine between government troops and the separatist rebels.

The exchange of prisoners also raises hope in Russia for the reduction of European sanctions imposed because of its role in the conflict, Karasev said. Russia also is under sanctions for its annexation of Crimea in 2014, shortly before the separatist conflict in the east began, but that dispute is unlikely to be resolved.

At Moscow’s Vnukovo airport, the released prisoners remained on the plane for about 15 minutes for unknown reasons. When they came off, many toting baggage, a bus drove them to a medical facility for examination.

Russia said it would release a full list of its citizens freed by Ukraine but had not done so by Saturday night. .

The 24 sailors in the swap were seized after Russian ships fired on two Ukrainian vessels on Nov. 25 in the Kerch Strait, located between the Black Sea and the Sea of Azov next to Russia-annexed Crimea.

Another passenger on the plane from Moscow was Nikolai Karpyuk, who was imprisoned in 2016 after he was convicted of killing Russians in Chechnya in the 1990s.

“Russia was not able to break me even though they tried hard to do this,” Karpyuk said in Kyiv.

Kirill Vyshinsky, head of Russian state news agency RIA-Novosti’s Ukraine branch, also had a seat. Vyshinsky had been jailed since 2018 on treason charges.

He thanked Harlem Desir, the media freedom representative for the Organization for Security and Cooperation In Europe, for calling for his release.

The exchange comes amid renewed hope that a solution can be found to the fighting in Ukraine’s east that has killed 13,000 people since 2014. A congratulatory tweet from U.S. President Donald Trump called the trade “good news.”

However, reaching a peace agreement faces many obstacles, such as determining the final territorial status of rebel-held areas. Russia insists it has not supported the rebels and the fighting is Ukraine’s internal affair.

A Russian Foreign Ministry statement welcoming the exchange touched on those difficulties, calling the war an “intra-Ukraine conflict.”

“Obviously, the habit of blaming Russia for all the troubles of Ukraine should remain in the past,” the ministry statement said.

The prospect of progress nevertheless appeared to rise last month with the announcement of a planned summit of the leaders of Russia, Ukraine, France and Germany – the four countries with representatives in the long-dormant “Normandy format,” a group seeking to end the conflict.

“We have made the first step. It was very complicated. Further, we will come closer to the return of our (war) prisoners,” Zelenskiy said of the prisoner exchange.

In July, a tentative agreement for the release of 69 Ukrainian prisoners and 208 held in Ukraine was reached by the Trilateral Contact Group of Russia, Ukraine and the Organization for Security and Cooperation in Europe; negotiations on fulfilling it continue.

Konstantin Kosachev, head of the foreign relations committee in the Russian parliament’s upper house, said the exchange represented a move “in the direction of crossing from confrontation to dialogue, and one can only thank those thanks to whose strength this became possible.”

Yuras Karmanau in Minsk, Belarus, contributed to this story.

Left: Oleksandr Kolchenko, who was jailed on terrorism charges in Russia, is greeted by his relatives upon arrival in Kiev after Russia-Ukraine prisoner swap, at Borispil International Airport, outside Kiev, Ukraine September 7, 2019. Ukrainian Presidential Press Service/Handout via Reuters.