MOSCOW — Russian President Vladimir Putin marked Victory Day, the anniversary of the defeat of Nazi Germany in World War II, in a ceremony shorn of its usual military parade and pomp by the coronavirus pandemic.

In neighboring Belarus, however, the ceremonies went ahead in full, with tens of thousands of people in the sort of proximity that has been almost unseen in the world for months.

Putin on Saturday laid flowers at the tomb of the unknown soldier just outside the Kremlin walls and gave a short address honoring the valor and suffering of the Soviet army during the war.

Victory Day is Russia’s most important secular holiday and this year’s observance had been expected to be especially large because it is the 75th anniversary, but the Red Square military parade and a mass procession called The Immortal Regiment were postponed as part of measures to stifle the spread of the virus.

The only vestige of the conventional show of military might was a flyover of central Moscow by 75 warplanes and helicopters.

The ceremony was the first public appearance in about a month for Putin, who has worked remotely as the virus took hold.

In his speech, he did not mention the virus — Russia has nearly 200,000 confirmed cases — or how its spread had blocked the observances that were to be a prestige project for him.

But he promised that full commemorations would take place.

“We will, as usual, widely and solemnly mark the anniversary date, do it with dignity, as our duty to those who have suffered, achieved and accomplished the victory tells us,” he said. “There will be our main parade on Red Square, and the national march of the Immortal Regiment — the march of our grateful memory and inextricable, vital, living communication between generations.”

The sharply reduced observances this year left a hole in Russia’s civic and emotional calendar. The war, in which the Soviet Union lost an estimated 26 million people including 8.5 million soldiers, has become a fundamental piece of Russian national identity. 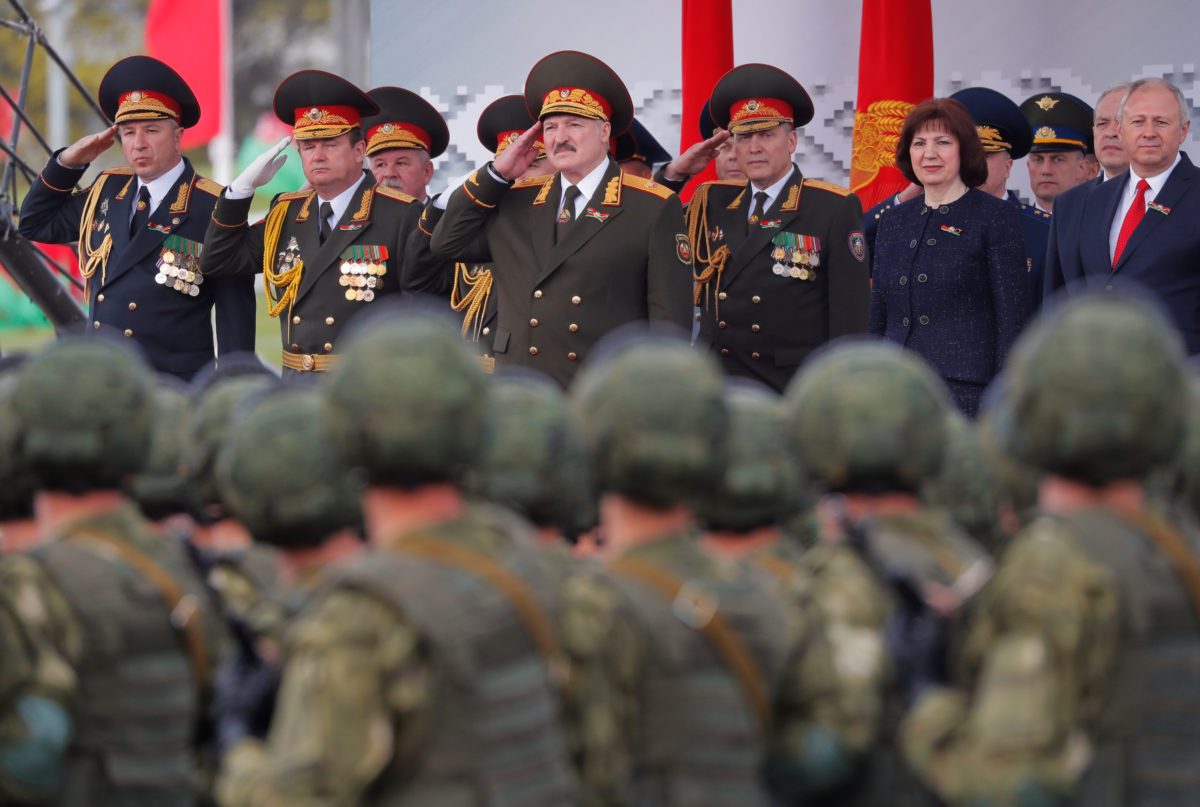 Belarusian President Alexander Lukashenko attends the Victory Day parade, which marks the anniversary of the victory over Nazi Germany in World War Two, amid the coronavirus disease (COVID-19) outbreak, in Minsk, Belarus May 9, 2020. Photo by Vasily Fedosenko/Reuters.

Beyond the stern formalities of the Red Square military parade and smaller parades in other cities, Russians in recent years have turned out in huge numbers for the Immortal Regiment processions, when civilians crowd the streets displaying photographs of relatives who died in the war or endured it. Russian officials routinely bristle at criticism of the Red Army’s actions in the war, denouncing the comments as attempts to “rewrite history.”

An online substitute for the processions was taking place Saturday and many people are expected to display relatives’ photos from their balconies and windows in the evening.

A full military parade of some 3,000 soldiers was held Saturday in Minsk, the capital of Belarus, which has not imposed restrictions to block the virus’ spread despite sharply rising infection figures. Tens of thousands of spectators, few of them wearing masks, watched the event.

President Alexander Lukashenko, who has dismissed concerns about the virus as a “psychosis,” said at the parade that Belarus’ ordeal in the war “is incomparable with any difficulties of the present day.”

In one of the final events of the VE Day commemoration in Western Europe, which took place a day earlier, Berlin’s landmark Brandenburg Gate was illuminated late Friday.

The words “Thank You” against a blue backdrop were projected onto the monument in Russian, English, French and German.

Earlier in the day German President Frank-Walter Steinmeier described May 8 as the day Germany, too, was “liberated” from Nazi dictatorship.

Yuras Karmanau in Minsk, Belarus, contributed to this report.

Left: Russian President Vladimir Putin lays flowers at a memorial to the Hero Cities during a ceremony at the Tomb of the Unknown Soldier on Victory Day, which marks the anniversary of the victory over Nazi Germany in World War Two, amid the outbreak of the coronavirus disease (COVID-19) in central Moscow, Russia May 9, 2020. Photo by Sputnik/Alexei Druzhinin/Kremlin via Reuters.