LONDON — Russia on Tuesday dismissed accusations of any involvement in the poisoning of an ex-spy and his daughter as “nonsense,” saying it will only cooperate with a British investigation if it receives samples of the nerve agent believed to have been used.

Police, meanwhile, said the investigation of who poisoned Sergei Skripal and his daughter, Yulia, will last many weeks and that they are not ready to identify any persons of interest in the inquiry. The father and daughter remain in critical condition in a Salisbury hospital.

British Prime Minister Theresa May has said Russia’s involvement is “highly likely,” and she gave the country a deadline of midnight Tuesday to explain its actions in the case. She is reviewing a range of economic and diplomatic measures in retaliation for the assault with what she identified as the military-grade nerve agent Novichok.

U.S. and European officials were quick to offer words of support for Britain, which will need the backing of its allies if any new sanctions are to have any impact.

“It sounds to me that they believe it was Russia and I would certainly take that finding as fact,” said U.S. President Donald Trump. He said Washington will condemn Moscow if it agrees with Britain’s findings, adding that he would discuss the incident with May.

Russian Foreign Minister Sergey Lavrov insisted that Russia is “not to blame” for the poisoning.

James Nixey, head of the Russia program at the Chatham House think-tank, said Britain must offer more than a symbolic response.

“Will actions meet with responses which have real-world effects?” he said. “Or are we going to have more fudge?”

Russian Foreign Minister Sergey Lavrov told reporters in Moscow that his country’s requests to see samples of the nerve agent have been turned down. He insisted that Russia is “not to blame” for the poisoning.

“We have already made a statement to say this is nonsense,” he said. “We have nothing to do with this.”

It was not immediately clear if Lavrov’s comments constituted Russia’s official response to May’s ultimatum.

Meanwhile the cases of other Russians who have died under mysterious circumstances are being raised. British Home Secretary Amber Rudd said police and the domestic security service will look into 14 deaths in Britain that might be linked to Russia.

“In the weeks to come, I will want to satisfy myself that the allegations are nothing more than that,” Rudd said. “The police and MI5 agree and will assist in that endeavor.”

BuzzFeed News reported in 2017 that 14 deaths in Britain and the U.S. dating to 2006 may have been linked to Russia. Among them are prominent critics of Russian President Vladimir Putin, including oligarch Boris Berezovsky and whistleblower Alexander Perepilichny. 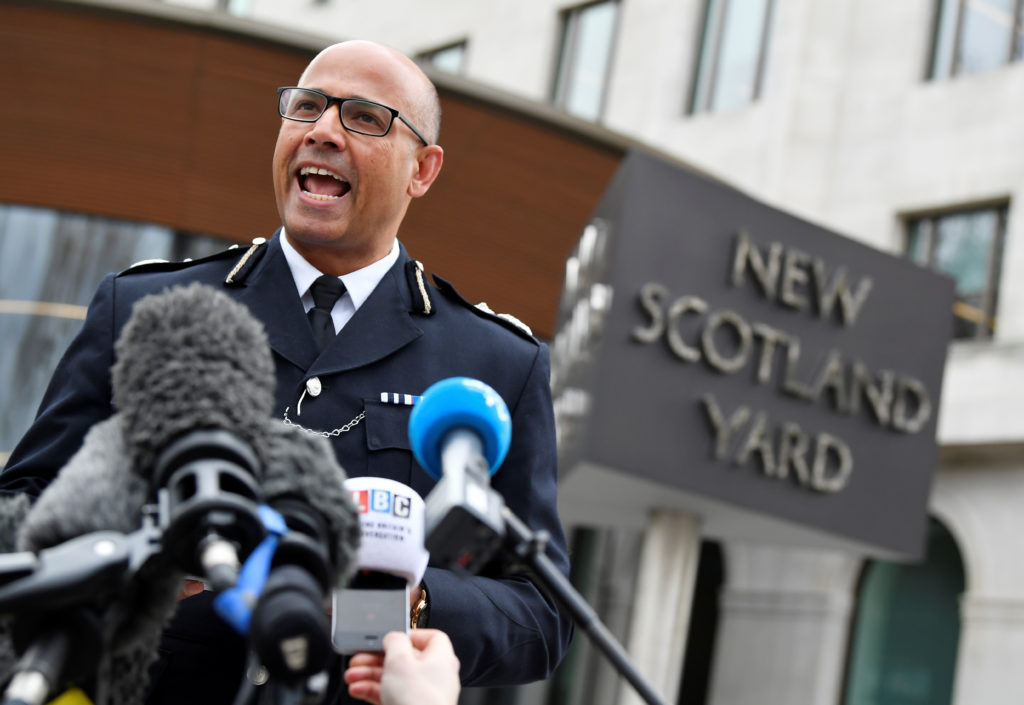 Neil Basu, the Metropolitan Police’s Assistant Commissioner for Counter Terrorism, gives a briefing on the poisoning of the former Russian intelligence officer Sergei Skripal and his daughter Yulia in Salisbury, outside New Scotland Yard in London. Photo by Toby Melville/Reuters

Russian officials and media have responded with a variety of accusations against Britain in recent days, including suggestions that it was seeking to influence Sunday’s presidential election, which Putin is expected to win easily.

British Foreign Secretary Boris Johnson said Britain was talking to its international partners about the situation.

“I’ve been encouraged by the willingness of our friends to show support and solidarity,” he said, specifically citing U.S. Secretary of State Rex Tillerson, who was ousted on Tuesday, and others.

“I think in particular from President (Emmanuel) Macron of France, I talked to Sigmar Gabriel my German counterpart, and from Washington where Rex Tillerson last night made it absolutely clear that he sees this as part of a pattern of disruptive behavior … malign behavior by Russia … the support for the reckless use of chemical weapons which stretches from Syria now to the streets of Salisbury.”

Tillerson told reporters late Monday that Russia’s actions would “certainly trigger a response.” He said it was “almost beyond comprehension” that a government would use such a dangerous substance in a public place.

The chief of the world’s chemical weapons watchdog also said that those responsible “must be held accountable.”

In a speech Tuesday to the Executive Council of the Organization for the Prohibition of Chemical Weapons, Director-General Ahmet Uzumcu said Johnson called him Monday evening to inform him of the results of investigations.

“It is extremely worrying that chemical agents are still being used to harm people. Those found responsible for this use must be held accountable for their actions,” he said.

Skripal, a former Russian military intelligence officer, was convicted of spying for Britain and then released in a spy swap. He had been living under his own name in Salisbury for eight years before the attack without attracting any public attention.

Police are appealing to the public to come forward if they saw Skripal and his daughter driving in his red BMW in the early afternoon of March 4 in the city, located 90 miles (145 kilometers) southwest of London.

New counterterrorism chief Neil Basu, who referred to Skripal as a British subject and his daughter as a Russian national, also said Salisbury residents would see much police activity in the coming days and that they should not be alarmed.

Some 38 people have been seen by medics in connection with the case.

Left: A police officer stands at a cordon placed around a payment machine covered by a tent in a supermarket car park near to where former Russian intelligence agent Sergei Skripal and his daughter Yulia were found poisoned in Salisbury, Britain. Photo by Henry Nicholls/Reuters