MOSCOW — The Russian Defense Ministry on Friday accused Britain of staging a fake chemical attack in the Syrian town of Douma last weekend, a bold charge that comes amid Moscow’s stern warnings to the West against striking Syria.

A day before a team from the international chemical weapons watchdog was to arrive in Douma, just east of Damascus, Russian Defense Ministry spokesman, Maj. Gen. Igor Konashenkov, said that images of victims of the purported attack were fakes staged with “Britain’s direct involvement.”

White Helmets first-responder volunteer and activists claimed an alleged chemical attack on April 7 by the Syrian government killed over 40 people in the town of Douma, the allegations that drew international outrage and prompted Washington and its allies to consider a military response. Moscow warned against any strikes and threatened to retaliate.

Konashenkov released statements by medics from Douma’s hospital, who said a group of people toting video cameras entered the hospital, shouting that its patients were struck with chemical weapons, dousing them with water and causing panic. The medics, however, said none of the patients had any symptoms of chemical poisoning, according to the satements.

Konashenkov said that “powerful pressure from London was exerted on representatives of the so-called White Helmets to quickly stage the premeditated provocation.” He added that the Russian military has proof of British involvement, but didn’t immediately present it.

The accusations followed an earlier statement by Russian Foreign Minister Sergey Lavrov, who said that “intelligence agencies of a state that is now striving to spearhead a Russo-phobic campaign were involved in that fabrication.” He didn’t elaborate or name the state.

Lavrov said Russian experts have already inspected the site of the alleged attack and found no trace of chemical weapons, adding without elaboration that Moscow has “irrefutable information that it was another fabrication.” 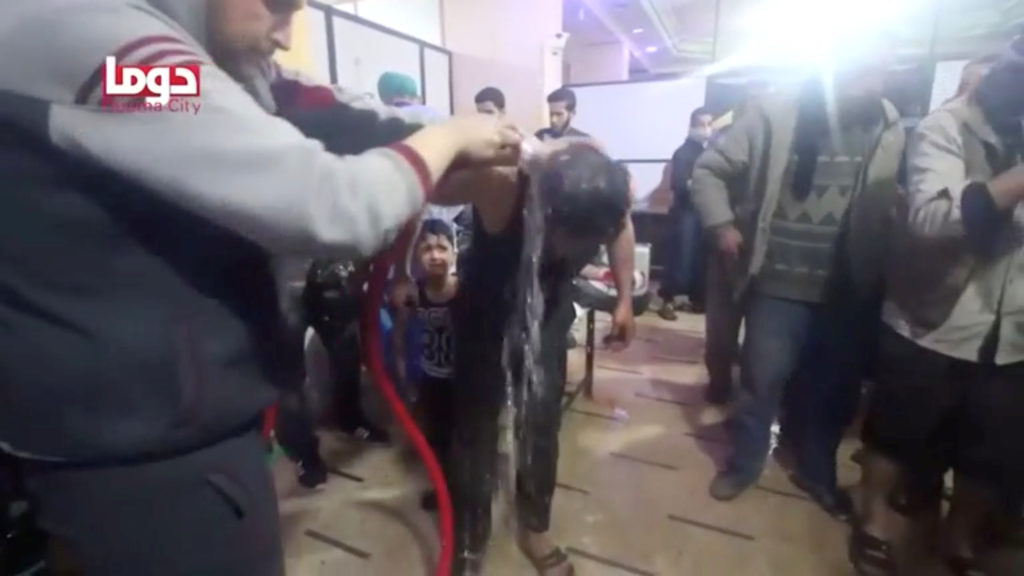 A man is washed following an alleged chemical weapons attack in Douma, Syria in this still image from video obtained by Reuters on April 8. Photo by White Helmets/Reuters TV

As fears of a Russia confrontation with Western powers mount, French President Emmanuel Macron expressed his “deep concerns” over the situation in Syria in a phone call with Russian President Vladimir Putin.

According to a statement by the French presidency, Macron called for dialogue between France and Russia to “continue and intensify” to bring peace and stability to Syria. The Kremlin readout said that Putin warned against rushing to blame the Syrian government before conducting a “thorough and objective probe.”

The Russian leader warned against “ill-considered and dangerous actions … that would have consequences beyond conjecture.” Putin and Macron instructed their foreign and defense ministers to maintain close contact to “de-escalate the situation,” the Kremlin said.

Russian officials — both from Moscow and speaking at the United Nations — alleged quickly after Saturday’s suspected attack that the images of the victims in Douma were fake.

The Russian Foreign Ministry also said that following Syrian rebels’ withdrawal from the eastern Ghouta suburbs of Damascus, stockpiles of chemical agents were found there. The ministry additionally pointed to previous alleged use of chemicals by the rebels in fighting with Syrian government troops.

Speaking to reporters in Moscow, Lavrov reiterated a strong warning to the West against military action in Syria, saying any such “adventures” in Syria would increase flows of refugees into Europe.

“I hope no one would dare to launch such an adventure now,” Lavrov said. In a reference to the U.S., he said that “it would only benefit those who are protected by the ocean and expect to sit there and engage in continuous efforts to stir up the region in order to advance their geopolitical goals.”

Lavrov noted that Russian and U.S. militaries have a hotline to prevent incidents, adding that it’s not clear if it would be sufficient amid mounting tensions.

“We are open for those contacts, they help to understand each other better,” Lavrov said.

Russia has been a staunch ally of Syrian President Bashar Assad’s government and has helped turn the tide of war in his favor since entering the conflict in September 2015. Syria’s civil war, which began as a popular uprising against Assad, is now in its eighth year.

A fact-finding mission from the Organization for the Prohibition of Chemical Weapons is expected to head to Douma, the site of the suspected attack. Both the Russian military and the Syrian government said they would facilitate the mission and ensure the inspectors’ security.

Lavrov said Russia expects the OPCW team to quickly visit the site. The Russian military said its chemical experts visited Douma shortly after the alleged attack and found no trace of chemical agents in ground samples. It also said Russian officers found no patients with chemical attack symptoms at a local hospital, and no indication of any burials having taken place of the victims.

On Thursday, Russia’s military said Douma has been brought under full control of the Syrian government under a Russia-mediated deal that secured the evacuation of the rebels and thousands of civilians after it was recaptured by Syrian forces. The government, however, said evacuations from Douma were ongoing and no Syrian government forces had entered the town.

Douma and the sprawling eastern Ghouta region near the capital, Damascus, had been under rebel control since 2012 and was a thorn in the side of Assad’s government, threatening his seat of power with missiles and potential advances for years. The government’s capture of Douma, the last town held by the rebels in eastern Ghouta, marked a major victory for Assad.

Zeina Karam in Beirut and Sylvie Corbet in Paris contributed to this report.

READ MORE: What we know about the suspected gas attack in Douma, Syria

Left: A child is treated in a hospital in Douma, eastern Ghouta in Syria, after a suspected chemical attack on April 7. White Helmets/Handout via Reuters

The potential for escalation if U.S. launches a Syria strike