MOSCOW — Russian police cracked down fiercely Saturday on demonstrators in central Moscow, beating some people and arresting more than 1,000 who were protesting the exclusion of opposition candidates from the ballot for Moscow city council. Police also stormed into a TV station broadcasting the protest.

Police wrestled with protesters around the mayor’s office, sometimes charging into the crowd with their batons raised. State news agencies Tass and RIA-Novosti cited police as saying 1,074 were arrested over the course of the protests, which lasted more than seven hours.

Along with the arrests of the mostly young demonstrators, several opposition activists who wanted to run for the council were arrested throughout the city before the protest. Alexei Navalny, Russia’s most prominent opposition figure, was sentenced Wednesday to 30 days in jail for calling an unauthorized protest.

The protesters, who police said numbered about 3,500, shouted slogans including “Russia will be free!” and “Who are you beating?” One young woman was seen bleeding heavily after being struck on the head.

Helmeted police barged into Navalny’s video studio as it was conducting a YouTube broadcast of the protest and arrested program leader Vladimir Milonov. Police also searched Dozhd, an internet TV station that was covering the protest, and its editor-in-chief, Alexandra Perepelova, was ordered to undergo questioning at the Investigative Committee. 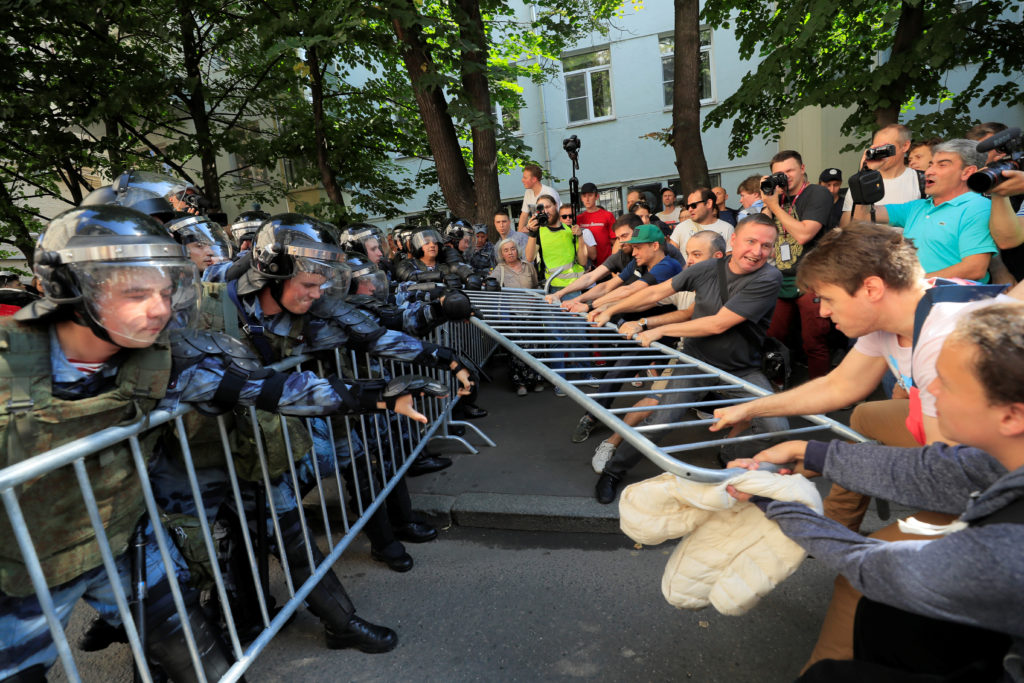 Protesters attempt to remove fences during a rally calling for opposition candidates to be registered for elections to Moscow City Duma, the capital’s regional parliament, in Moscow, Russia July 27, 2019. Photo by Tatyana Makeyeva/Reuters

Police eventually dispersed protesters from the area of the mayor’s office, but many demonstrators reassembled at a square about a kilometer (half-mile) away, where new arrests began, with police beating some to the ground with wide truncheon swings while other demonstrators tried to push them away.

Before the protest, several opposition members were detained, including Ilya Yashin, Dmitry Gudkov, Lyubov Sobol and top Navalny associate Ivan Zhdanov. All were released later in the day; Zhdanov and Sobol went to the relocated protest and were detained again.

There was no immediate information on what charges the detainees might face.

Once a local, low-key affair, the September vote for Moscow’s city council has shaken up Russia’s political scene as the Kremlin struggles with how to deal with strongly opposing views in its sprawling capital of 12.6 million.

The decision by electoral authorities to bar some opposition candidates from running for having allegedly insufficient signatures on their nominating petitions had already sparked several days of demonstrations even before Saturday’s clashes in Moscow.

The city council, which has 45 seats, is responsible for a large municipal budget and is now controlled by the pro-Kremlin United Russia party. All of its seats, which have a five-year-term, are up for grabs in the Sept. 8 vote.

Left: Law enforcement officers detain a participant of a rally calling for opposition candidates to be registered for elections to Moscow City Duma, the capital's regional parliament, in Moscow, Russia July 27, 2019. Photo by Maxim Shemetov/Reuters