KIGALI, Rwanda (AP) — Rwanda’s president says that the man portrayed as a hero in the film “Hotel Rwanda” will stand trial for allegedly supporting rebel violence.

President Paul Kagame, appearing on national television Sunday, did not explain how Paul Rusesabagina was brought to Rwanda where he has been held in custody for more than a week.

Rusesabagina is credited with saving 1,200 lives during Rwanda’s 1994 genocide by letting people shelter in the hotel he was managing during the mass killings. Now he is accused of supporting rebel violence in Rwanda and his family complain that they have not been able to speak to him and that he has not had access to a lawyer.

“Rusesabagina heads a group of terrorists that have killed Rwandans. He will have to pay for these crimes.,” said Kagame on a broadcast in which he was asked questions by some local and foreign journalists and viewers. “Rusesabagina has the blood of Rwandans on his hands.”

He said Rusesabagina’s trial will be held openly and conducted fairly.

“We are obligated to do this,” said Kagame. “We want to do things in a right way.” 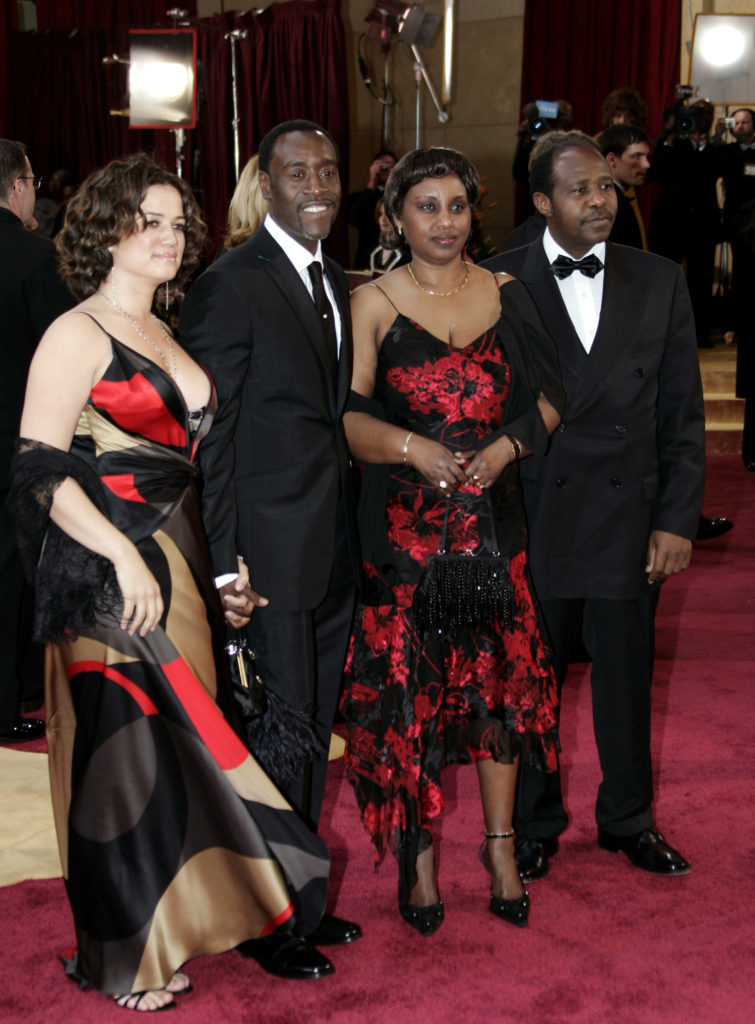 FILE PHOTO: Paul Rusesabagina (R) and his wife Tatiana (2nd R) on whose lives the movie “Hotel Rwanda” was based, arrive at the 77th annual Academy Awards in Hollywood February 27, 2005. Photo by John Schults/Reuters.

Kagame did not explain how Rusesabagina, who had lived outside Rwanda since 1996 and is a citizen of Belgium and has a U.S. permanent residence permit, turned up in Rwanda last week but suggested that he came of his own accord.

“What if someone told you that he brought himself — even if he may not have intended it? You will be surprised how he got here. He was not kidnapped or hoodwinked. His coming to Rwanda has more to do with himself than anybody else,” said Kagame.

Kagame suggested that Rusesabagina was told a story that fit into his expectations and ended up in Rwanda. “There was no kidnap in the process of bringing Rusesabagina here. It was actually flawless!” said Kagame. “When the time comes he will tell the story himself but he led himself here.”

Kagame said others were Rusesabagina’s accomplices in alleged violent activities and have already been arrested and are facing trial in Kigali, Rwanda’s capital. 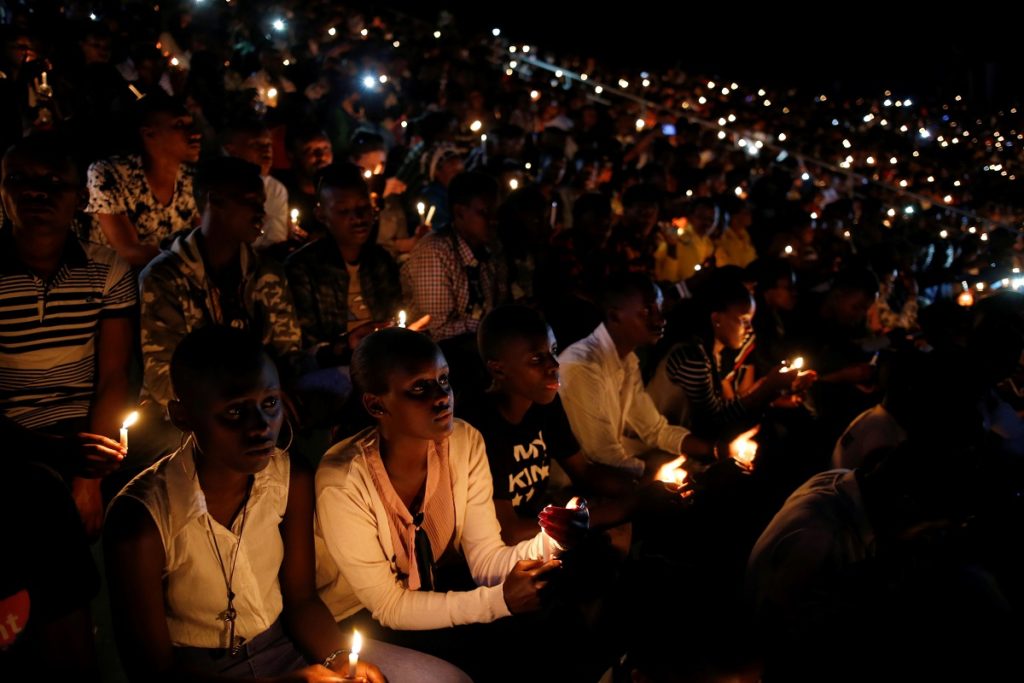 Participants hold candles while holding a night vigil during a commemoration ceremony marking the 25th anniversary of the Rwandan genocide, at the Amahoro stadium in Kigali, Rwanda April 7, 2019. Photo by Baz Ratner/ Reuters.

Rusesabagina’s family and supporters, however, say Rwandan authorities have denied him access to a lawyer nearly a week after the outspoken government critic was paraded in handcuffs and accused of terrorism.

The Hotel Rwanda Rusesabagina Foundation said Rusesabagina has had no consular visits, and it rejected the Rwandan government’s claim that it had talked to his sons about a potential visit as “not true.”

“Paul’s wife has called the jail and has not been allowed to talk to him,” it said on Saturday.

The family has said they believe he was “kidnapped” during a visit to Dubai and that he would never knowingly have boarded a plane for Rwanda’s capital, Kigali.

Rusesabagina was awarded the U.S. Presidential Medal of Freedom in 2005 for saving the lives of more than 1,200 people as a hotel manager during Rwanda’s 1994 genocide in which some 800,000 Tutsis and moderate Hutus were killed.

Rwandan authorities have not publicly shared any international arrest warrant. They have referred to “international cooperation” but given no details.

Rwandan authorities granted what they called an “exclusive” interview with Rusesabagina to a Kenyan newspaper, The East African, in which he said he had been treated with “kindness” while in custody in Rwanda but did not discuss the accusations against him or how he was apprehended.

It is not clear when Rusesabagina will appear in court. Rwandan law says a suspect can be in provisional detention for 15 days, renewable for up to 90 days.

The Rwandan government has said it issued an arrest warrant for Rusesabagina to answer charges of serious crimes including terrorism, arson, kidnap, and murder perpetrated against unarmed civilians. Police called him the suspected “founder, leader, sponsor and member of violent, armed, extremist terror outfits including the Rwanda Movement for Democratic Change.”

Rwanda points to a video posted online in 2018 in which Rusesabagina says “it is imperative that in 2019 we speed up the liberation struggle of the Rwandan people … the time has come for us to use any means possible to bring about change in Rwanda, as all political means have been tried and failed.”

The MRCD has an armed wing, the National Liberation Front, that has been accused of attacks inside Rwanda in 2018 and 2019. Rwanda arrested NLF spokesman Callixte Nsabimana last year.

Rusesabagina in the past has denied the charges that he financially supports Rwandan rebels, saying he is being targeted for criticizing the Kagame government over human rights abuses.

Rusesabagina’s detention has prompted concern among human rights activists that this was the latest example of the Rwandan government targeting critics beyond its borders.

The U.S. government has said it expects the Rwandan government to provide “humane treatment, adhere to the rule of law and provide a fair and transparent legal process” for Rusesabagina.

Left: FILE PHOTO: Paul Rusesabagina, the man who was hailed a hero in a Hollywood movie about the country's 1994 genocide is detained and paraded in front of media in handcuffs at the headquarters of Rwanda Investigation Bureau in Kigali, Rwanda August 31, 2020. Photo by Clement Uwiringiyimana/Reuters.