Taiwan became the first place in Asia to allow same-sex marriage last week in a legislative vote on a cause that the island’s LGBT rights activists have championed for two decades.

A household registration office in central Taipei was packed as couples seized the earliest opportunity to tie the knot. Jubilant couples held flower bouquets and posed for photos, smiling and kissing.

“The legalization of marriage is only the first step,” said a 48-year-old novelist who writes under the pen name Chen Hsue.

“In the future, through this legalization, I hope LGBT people could be accepted as ordinary people by Taiwanese society,” said Chen, who has lived with her partner for more than 10 years. 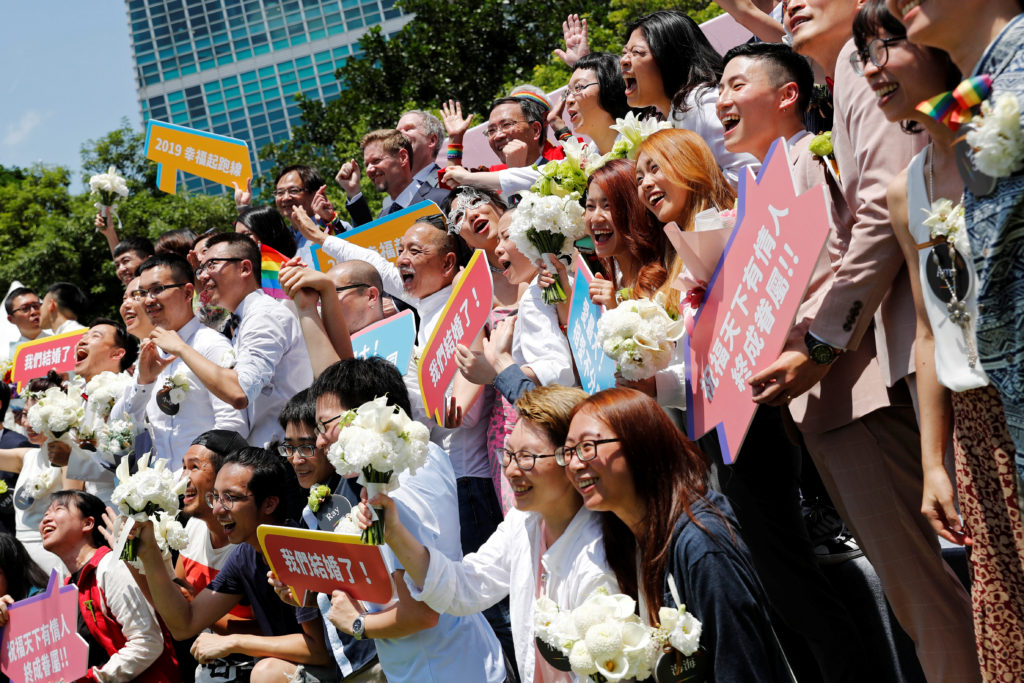 Gay and lesbian newlyweds pose for group photo at a pro same-sex marriage party after registering their marriages in Taipei, Taiwan. Photo by Tyrone Siu/Reuters

Taiwan’s Ministry of the Interior said 500 same-sex couples registered their marriages across the island on Friday.

A Taipei resident who identified himself only by a nickname said tearfully that he and his partner feel lucky that they are able to announce in front of everyone that they are gay and have gotten married. The two men wore matching pastel pink suits and stood in front of a rainbow display featuring messages blessing the newlyweds.

Several couples requested that their real names not be made public because they fear the stigma that persists around being gay in Taiwan.

Kristin Huan, a YouTube blogger, said she and her partner Amber can strengthen other people’s faith and hope by sharing their story online.

“Coming out of the closet is a very difficult process for every gay person,” Huan said.

Taiwan split from mainland China amid civil war in 1949, though China’s ruling Communist Party claims the island as part of its own territory.

Same-sex marriage is not legal in mainland China, and while LGBT rights advocates have made progress over the years in raising awareness and promoting tolerance, depictions of same-sex relationships are still regularly censored on Chinese TV and social media.