In Saudi Arabia, as a women’s driving ban is lifted Sunday, human rights advocates are criticizing the country’s remaining restrictions on women.

The move to end the ban on female drivers is part of Crown Prince Mohammed bin Salman’s Vision 2030 initiative, which aims to modernize and diversify the Saudi economy beyond oil. But advocates say these efforts are occurring alongside a crackdown on activists and as inequality between men and women persists in the country.

The end of the driving ban follows the arrests of 17 people in recent weeks. The Saudi public prosecutor’s office said eight of them, five women and three men, have been temporarily released. But human rights groups warn that several of those arrested remain in jail and that police targeted them for support of gender parity in one of the most conservative countries in the world.

Here’s a closer look at what brought about this change and what advocates still hope to achieve past Sunday’s driving ban lift. 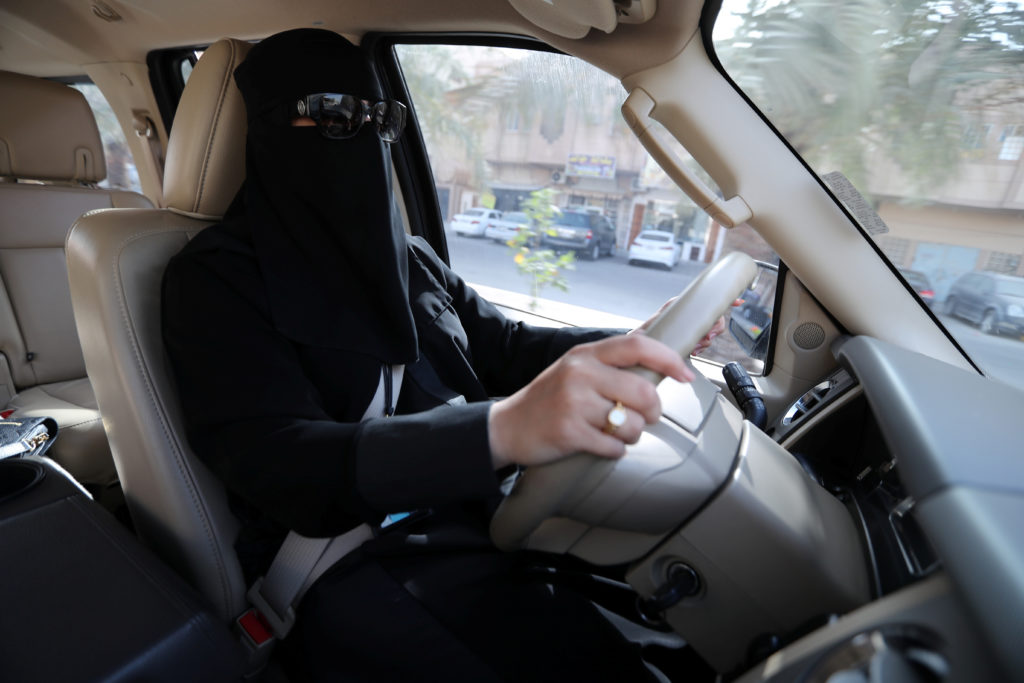 A Saudi woman, Amira, who works in Aramco, drives to her office in Dammam, Saudi Arabia, on June 24, 2018. Photo by Hamad I Mohammed/Reuters

How did we get here, and what has changed?

Women in Saudi Arabia have campaigned to lift the driving ban for decades.

In 1990, Saudi women protested the ban by driving their cars around the the capital city of Riyadh until they were stopped by the police. Many of them were arrested, suspended from jobs or shunned by society. Before the ban’s lift, Saudi Arabia was the only country left in the world that prevented women from driving.

In a defiant move, some activists posted videos of themselves behind the wheel on YouTube.

But the longstanding policy changed when Saudi Arabia announced in September that it would allow women to drive. It was a move that appeared to align with the crown prince’s efforts to modernize the country in order to attract foreign direct investment and to wean the country off the oil economy. It was also a practical move in a country where women account for 22 percent of the workforce. By 2030, MBS wants that number to increase to 30 percent.

To reach that goal, women have to be able to drive themselves to work, said Hana Al-Khamri, a former journalist, analyst and writer on Saudi affairs. “Allowing women to drive a car is a move of pragmatism,” Al-Khamri said.

“Rights are only granted when it serves the interest, the agenda and the survival of the totalitarian political system,” she told the NewsHour.

Saudi authorities say they have put in place all the framework for women in the kingdom to start driving on Sunday. Among the changes, driving schools have been set up across five cities in the country and would be taught by Saudi women who obtained their licenses abroad. 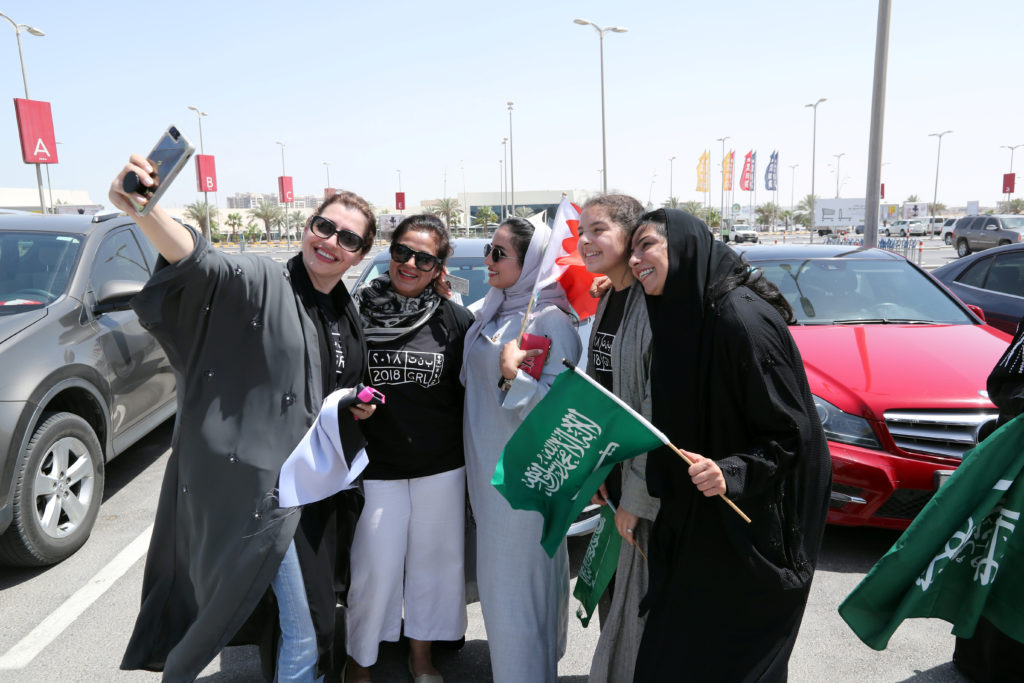 Bahraini and Saudi women celebrate the lifting of the driving ban on women in east Saudi Arabia, on June 24, 2018. Photo by Hamad I Mohammed/Reuters

The changes have been celebrated by many both within Saudi Arabia and throughout the world.

Last month, a Saudi woman test-drove a car during the country’s first women-only car exhibition, which featured a team of saleswomen for its new customer base.

Vogue Arabia’s June 2018 edition, the first to solely focus on Saudi Arabia and the gains women have made there, featured Princess Hayfa bint Abdullah Al Saud on the cover in the driver’s seat of a red convertible.

“In our country, there are some conservatives who fear change,” the princess told Vogue. “For many, it’s all they have known. Personally, I support these changes with great enthusiasm.
Driving isn’t the only achievement for Saudi women this year.”

Despite the ban, a government-led crackdown on women has continued

But even as women are seeing progress toward more equality in some areas, Saudi Arabian authorities and government-aligned media are cracking down in other ways.

In May, the government launched a public smear campaign against six detained women’s rights activists, labeling them as traitors.

The United Nations Human Rights Office has requested Saudi Arabia provide information about where arrested women’s rights activists are being held and ensure their right to due process.

Kareem Chehayeb, a Saudi Arabia researcher with Amnesty International, told the NewsHour that the government is spearheading a “chilling media campaign” and said the government targeted activists “as traitors or foreign agents.”

The activists “are a model for others and the demand for the rights will continue,” activist Yahya Assiri said. But, he adds, “for that, the authorities trying to stop any other campaign, want people to thank MBS and not the activists and want to abuse the reputation of the heroes.”

Earlier this month, Saudi Arabia said it has “temporarily” released eight activists that were charged with posing a threat to state security for their “contact with foreign entities with the aim of undermining the country’s stability and social fabric” and nine other women’s rights activists remained in detention “after sufficient evidence was made available and for their confessions of charges attributed to them.”

Rights groups have identified many of the detainees as women who support the right to drive and an end to the conservative kingdom’s male guardianship system. 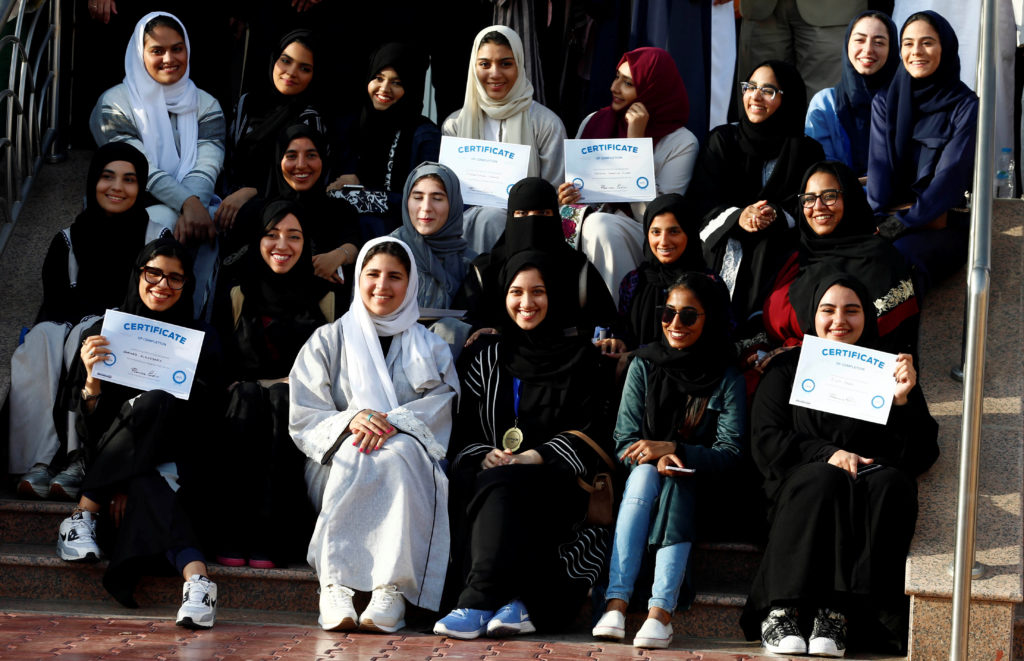 Women pose for a photo after attending a driving training at a university in Jeddah, Saudi Arabia, on March 7, 2018. Photo by Faisal Al Nasser/Reuters

Now, human rights groups are struggling to reconcile the recent crackdown with the government’s stated goals of social reforms.

“MBS reserves the right to be the sole interpreter of women’s and society’s needs and anyone who question the regime or demand more rights will be put behind bars,” Al-Khamri said. “MBS is not reformist – as it outwardly and ostensibly appears – but he is the face of the neo-totalitarian state.”

“The regime will continue to harass, silence, and imprison voice which challenges the norms and the power structure or attempt to mobilize the society for a sustainable change,” she added.

MBS’s reforms do “not justify the crackdown on human rights activism, on freedom of speech, freedom of expression rather association and assembly,” Chehayeb of Amnesty International said. “What you’re witnessing now is a greater stifling more than ever before of these freedoms.”

Today, women are out on the streets driving around the kingdom, but the activists who campaigned for lifting the ban are still behind bars. Saudi media organizations have accused the arrested activists of plotting to “violate national unity.”

Many aspects of everyday life are still off-limits for women. They still need a male guardian’s permission to travel overseas, divorce or marry, get a job, open a bank account and socialize freely in public places with the opposite sex.

As the driving ban is lifted, activists say they will celebrate, but will not stop fighting to gain other rights for women.

“We are still waiting for the real reform,” Assiri said.

Left: Bahraini Nouf Al Maloud (R) hugs Saudi Zahoor Assiri (L) as they arrive in east Saudi in their cars to promote and congratulate Saudi women on the lifting of the driving ban in Saudi Arabia on June 24, 2018. Photo by Hamad I Mohammed/Reuters