Nine female candidates were elected to Saudi Arabian municipal councils and thousands of women voted in elections this weekend for the first time in the country’s history, Saudi officials said.

At least 119,000 women had registered to vote, while 978 ran for political positions on local councils. Several districts reported more than an 80 percent voter turnout for female voters.

“Even if it was only one woman, we’re really proud of that,” said Sahar Hassan Nasief, a Saudi activist for women’s rights, about the winning candidates. “Honestly, we weren’t expecting anyone to win.”

The move to open up elections and grant the right to vote to Saudi women was backed by the country’s late King Abdullah, who made the decision following the Arab Spring in 2011.

Saudi Arabia was the last country to ban women from voting, according to Agency France-Presse. Men were granted the right to vote in 2005. 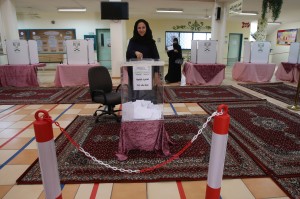 Saudi women cast their votes for the municipal elections at a polling station on Saturday in Jeddah, Saudi Arabia. Photo by Jordan Pix/Getty Images.

There were more than 1.3 million registered male voters and 5,938 male candidates who were vying for nearly 300 municipal seats, the only positions open to elections in Saudi Arabia, which is ruled by an absolute monarch.

While the decision was viewed as a significant change in a country long-known for suppressing women’s rights, the occurrence was not without boundaries, including banning candidates pushing to grant women the right to drive and requiring women to speak behind partitions or having a male relative represent them as they campaigned.

But it was viewed as a step toward granting equal rights in the country, according to Hatoon al-Fassi, a coordinator for the Saudi Baladi Initiative, which worked to raise awareness about the elections.

“I don’t consider winning to be the ultimate goal,” she said, before the elections. “We are looking at it as an opportunity to exercise our right and to push for more.”