LONGQUAN, China (AP) — Hundreds of persimmon trees that should be loaded with yellow fruit lie wilted in Gan Bingdong’s greenhouse in southwestern China, adding to mounting farm losses in a scorching summer that is the country’s driest in six decades.

Gan’s farm south of the industrial metropolis of Chongqing lost half its vegetable crop in heat as high as 41 degrees Celsius (106 Fahrenheit) and a drought that has shrunk the giant Yangtze River and wilted crops across central China.

Gan’s surviving eggplants are no bigger than strawberries. A reservoir beside his farm has run dry, forcing him to pump groundwater.

Drought conditions across a swath of China from the densely populated east across central farming provinces into eastern Tibet have “significantly increased,” the national weather agency said Saturday.

The forecast called for high temperatures and no rain for at least three more days from Jiangsu and Anhui provinces northwest of Shanghai, through Chongqing and Sichuan provinces to the east of Tibet.

Local authorities were ordered to “use all available water sources” to supply households and livestock, the weather agency said.

The biggest impact is in Sichuan, where factories have been shut down and offices and shopping malls told to turn off air-conditioning after reservoirs to generate hydropower fell to half their normal levels.

The province of 94 million people gets 80% of its electricity from hydropower dams. 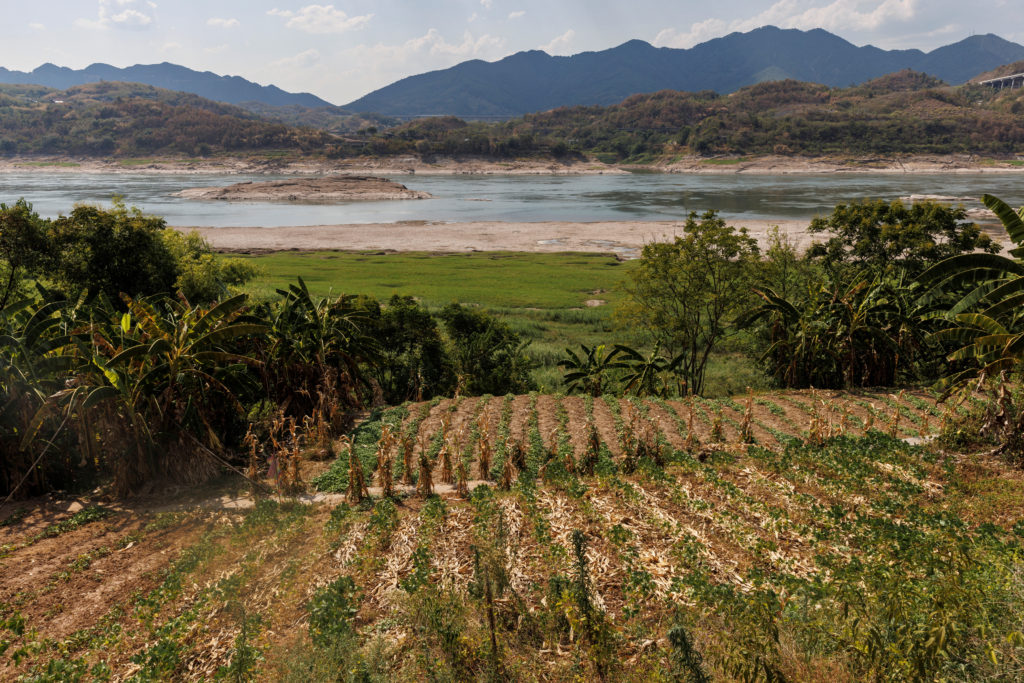 A view shows parched crops on the bank of the Yangtze River, which is approaching record-low water levels during a regional drought in Chongqing, China, Aug. 20, 2022. Photo by Thomas Peter/Reuters

Factories that make processor chips for smartphones, auto components, solar panels and other industrial goods were shut down for at least six days through Saturday. Some say output will be depressed while others say supplies to customers are unaffected.

The shutdowns add to challenges for the ruling Communist Party as President Xi Jinping, the country’s most powerful leader in decades, prepares to try to break with tradition and award himself a third five-year term as leader at a meeting in October or November.

Growth in factory output and retail sales weakened in July, setting back China’s economic recovery after Shanghai and other industrial centers were shut down starting in late March to fight virus outbreaks.

State-run utilities are shifting power to Sichuan from other provinces. Authorities used fire trucks to deliver water to two dry villages near Chongqing.

Gan, the farmer south of Chongqing, said he has lost one-third of his persimmon plants.

Farmers in the area usually harvest rice in late August or September but plan to finish at least two weeks early before plants die, according to Gan.

A community reservoir beside Gan’s farm is nearly empty, leaving a pool surrounded by cracked earth. After supply canals ran dry, it sprang a leak and heat accelerated evaporation. Gan is pumping underground water for irrigation.

“If the high temperature comes every year, we will have to find a solution such as to build up nets, daily irrigation or to install a spray system to reduce the loss,” Gan said.

Mudslides and overflowing rivers late Thursday hit six villages in Qinghai’s Datong county, the report said. Some 1,500 people were forced out of their homes.

Left: Local farmer Chen Xiaohua, 68, shows his dead sweet potato plants after all his crops perished as the region is experiencing a drought in Fuyuan village in Chongqing, China, Aug. 19, 2022. Photo by Thomas Peter/Reuters