Security forces kill at least 9 in new protests in Iraq

BAGHDAD — Security forces fired live ammunition and tear gas at protesters in the Iraqi capital and in a southern city on Saturday, killing at least nine people and wounding 39 as thousands of protesters took to the streets and set fire to political party offices, government and human rights commission members said.

The clashes came hours after authorities lifted a round-a-clock curfew in Baghdad meant to quell the unrest, now in its fifth day and sparked by popular anger over a lack of jobs and endemic corruption in the oil-rich country. The upheaval is the most serious challenge for Iraq since the defeat of the Islamic State group two years ago.

Saturday’s violence brought to 73 the total number of people killed over five days of protests, deepening the country’s political crisis. The semiofficial Iraqi High Commission for Human Rights, affiliated with the parliament, put the death toll at 94. It said nearly 4,000 people have been wounded since Tuesday. 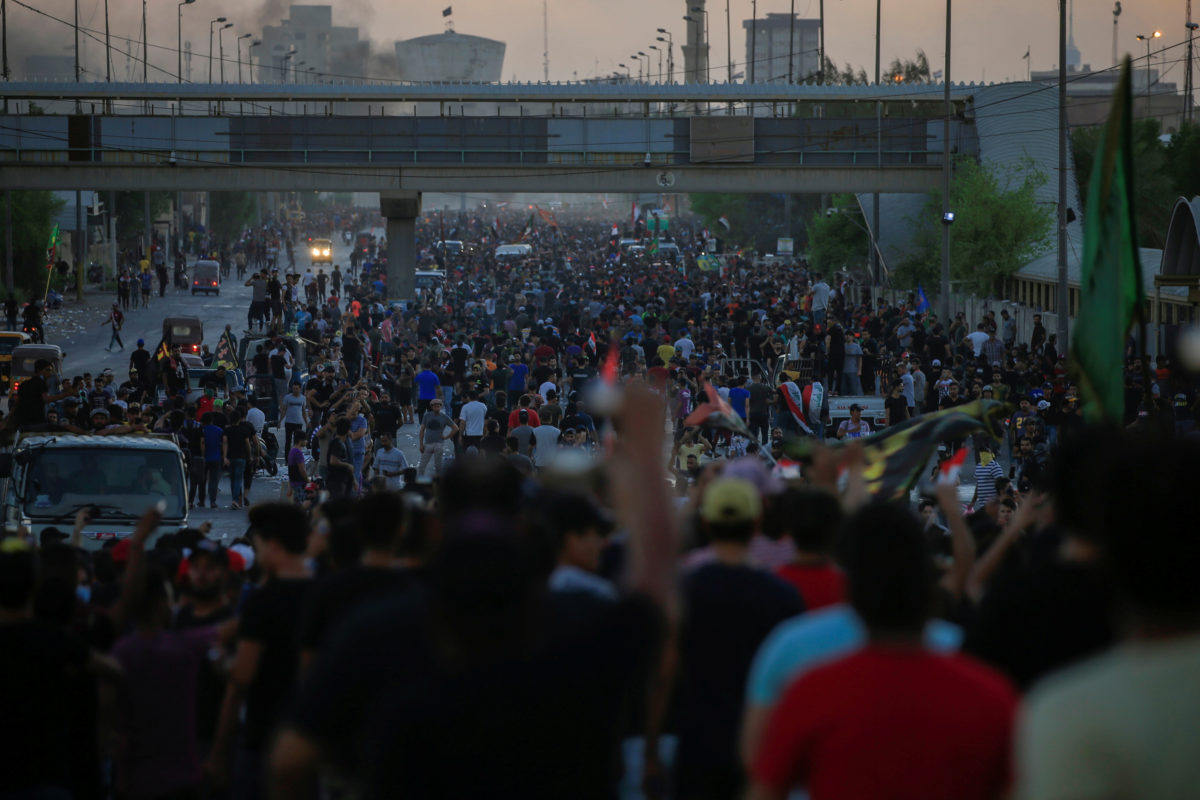 Demonstrators gather at a protest during a curfew, three days after the nationwide anti-government protests turned violent, in Baghdad, Iraq October 4, 2019. Photo by Alaa al-Marjani/Reuters.

The bloodiest violence in Baghdad came Friday, when 22 people were killed. Health officials said many of the victims were wounded in the head and chest.

In a desperate attempt to curb the growing rallies, authorities blocked the internet Wednesday and imposed the curfew on Thursday. The curfew, ignored by protesters, was lifted at 5 a.m. Saturday, allowing shops to open and traffic to flow in most of Baghdad. But by early afternoon, dozens of protesters began gathering in the streets around central Tahrir Square, which remained closed to cars. Armored vehicles and troops sealed off the area leading to the square, while special forces and army vehicles deployed around the square and as far as 2 kilometers (1.2 miles) away.

Health and security officials said four people were killed when forces fired at protesters gathered in a street near the square.

Hundreds of protesters retreated amid intense tear gas and live fire by security forces, but at least three more were killed by gunfire.

Thousands of protesters later took to the streets in the southern cities of Nasiriyah and Diwaniyah, according to Iraqi officials and a member of the semiofficial human rights commission, defying a curfew that was still in place there.

In Diwaniyah, at least one protester was killed as demonstrators marched toward local government offices, a medical official and human rights official said. They did not provide details.

In the restive city of Nasiriyah, demonstrators torched the offices of three political parties and a lawmaker. Security forces responded with gunfire, but there was no immediate word on casualties, said the officials, who described the protest as “very large.” 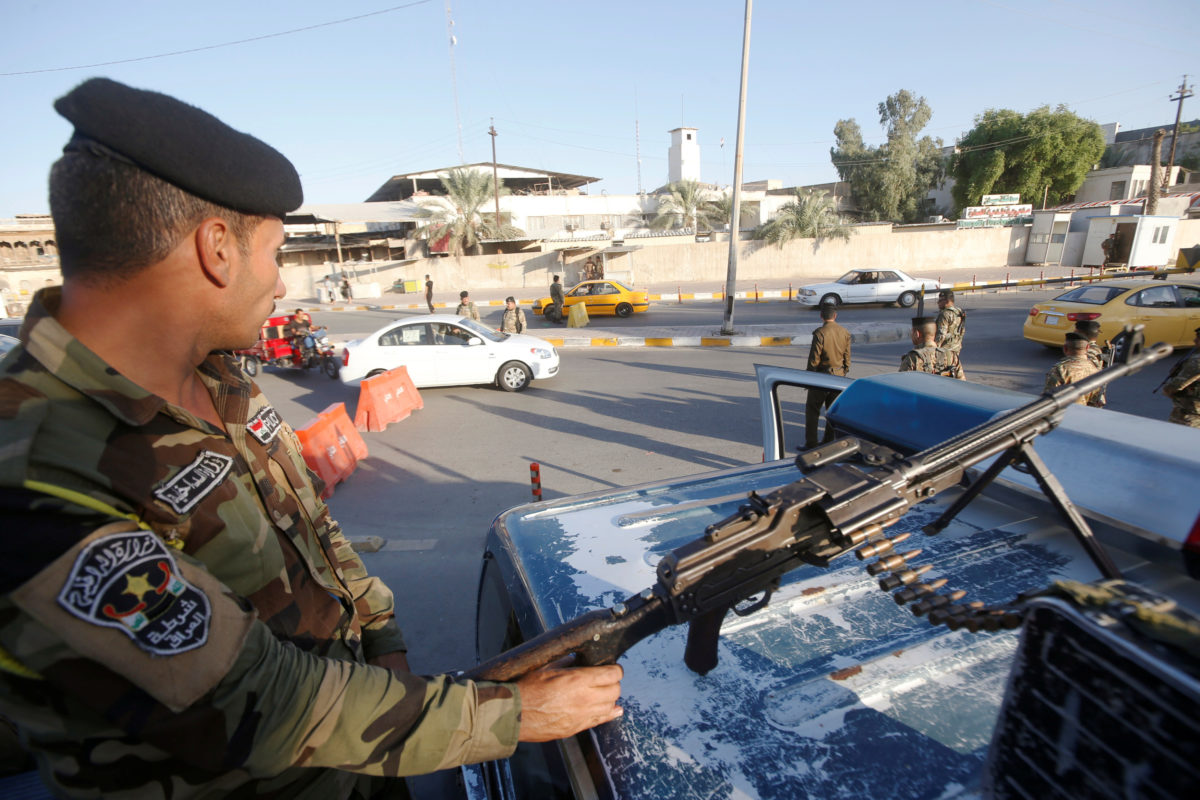 Members of Iraqi police check cars near Maysan Governorate building, which was burnt by demonstrators during a protest over unemployment, corruption and poor public services, in Maysan province, south of Baghdad, Iraq October 4, 2019. Photo by Essam al-Sudani/Reuters.

Another protester was killed and 13 wounded in the southern Baghad neighborhood of Zaafaraniyeh, health and police officials said. Nearly 40 people were wounded in the capital, said medical officials. All the officials spoke on condition of anonymity because they were not authorized to brief reporters.

Rasoul Saray, a 34-year-old unemployed Baghdad resident who took part in the protests, said security officials at checkpoints were stopping young men and turning them away in various suburbs, apparently fearing they would join the protests. Saray said he saw one young man get arrested after security officials inspected his mobile phone and found a recorded protest video.

Iraqi politicians have scrambled to contain the demonstrations, calling for meetings with protest representatives and an emergency session of parliament Saturday to discuss protesters’ demands. But there was no quorum for the session after the largest bloc boycotted the session at the behest of its leader, influential Shiite cleric Muqtada al-Sadr. On Friday, al-Sadr called on Prime Minister Adel Abdul-Mahdi’s government to resign and hold early elections, saying the shedding of blood of Iraqis “cannot be ignored.”

Al-Sadr called for boycotts of parliamentary sessions until the government puts forth proposals acceptable to the protesters and other government opponents.

Both Abdul-Mahdi and Parliament Speaker Mohammed al-Halbusi called on protest representatives to meet with them so they could hear their demands.

The rallies erupted spontaneously on Tuesday, when mostly young demonstrators took to the streets demanding jobs, improved services such as electricity and water, and an end to corruption in the oil-rich country.

“We will keep going and we won’t back down,” said Abbas Najm, a 43-year-old unemployed engineer who was part of a rally Saturday in Tahrir Square in which demonstrators raised banners demanding Abdul-Mahdi’s resignation and an investigation into the killings of protesters. “It has been 16 years of corruption and injustice. We are not afraid of bullets or the death of martyrs.”

Abdul-Mahdi said in an address to the nation that the protesters’ “legitimate demands” had been heard, but he defended the deadly response of security forces as a “bitter medicine” that was necessary for the country to swallow.

Left: Iraqi men mourn over the coffin of a demonstrator who was killed at anti-government protests, during a funeral in the holy city of Najaf, Iraq October 5, 2019. Photo by Alaa al-Marjani/Reuters.