BAGHDAD — Iraqi protesters pressed on with angry anti-government rallies in the capital and across several provinces for a fifth day Saturday, setting government offices on fire and ignoring appeals for calm from political and religious leaders. Security agencies fatally shot 19 protesters and wounded more than three dozen in a sustained deadly response that has claimed more than 80 lives since the upheaval began.

The semiofficial Iraqi High Commission for Human Rights, affiliated with the parliament, put the death toll at 94. It said nearly 4,000 people have been wounded since Tuesday, when mostly young demonstrators spontaneously initiated the rallies to demand jobs, improvements to electricity, water and other services, and an end to corruption in the oil-rich nation.

The violent deadlock presented the conflict-scarred nation with its most serious challenge since the defeat of the Islamic State group two years ago and deepened the political crisis of a country still struggling with the legacy of multiple, unfinished wars since the U.S. invasion in 2003.

“It has been 16 years of corruption and injustice,” said Abbas Najm, a 43-year-old unemployed engineer who was part of a rally Saturday in the square. “We are not afraid of bullets or the death of martyrs. We will keep going and we won’t back down.” 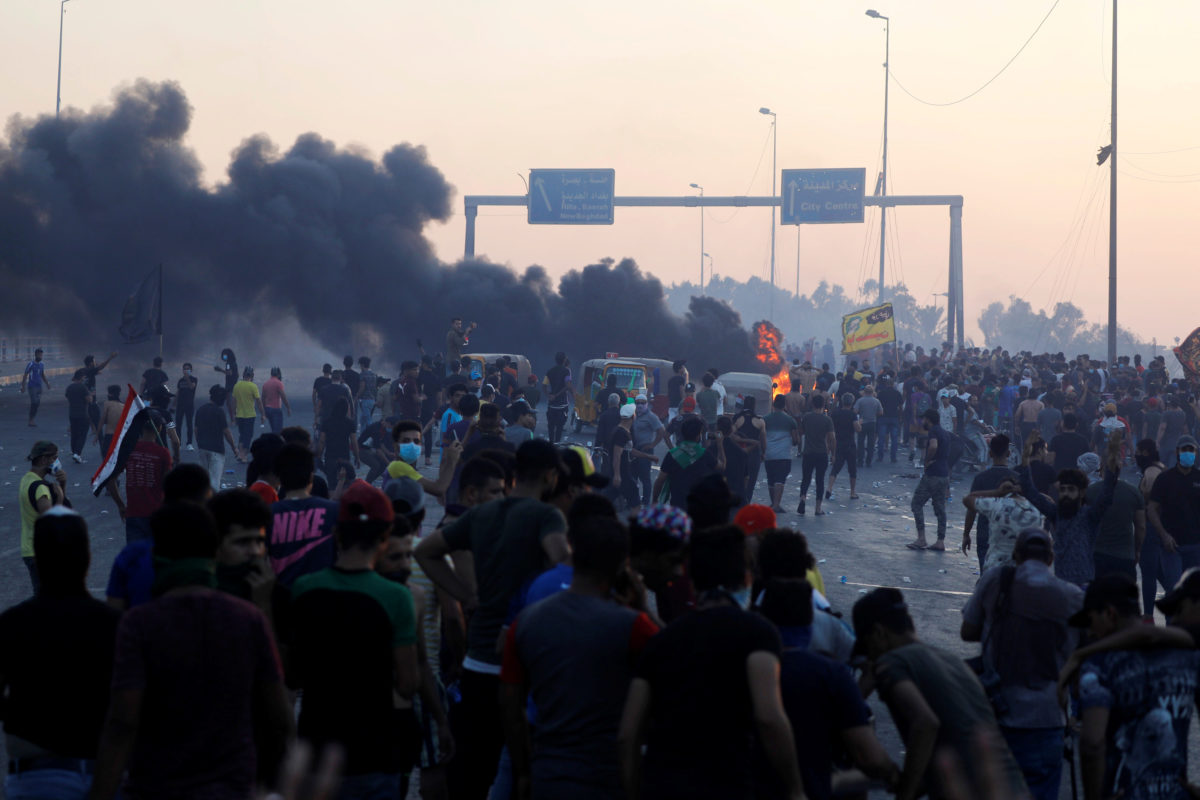 Demonstrators gather at a protest after the lifting of the curfew, following four days of nationwide anti-government protests that turned violent, in Baghdad, Iraq October 5, 2019. Photo by Thaier Al-Sudani/Reuters.

Amid the chaos, masked gunmen stormed the office of three TV news stations in Baghdad. Gunmen in black cars and wearing black clothes stormed the offices of Al-Arabiya, a Saudi-owned pan-Arab news channel on Abu Nawas Street, beat up some of the employees and smashed equipment before they fled, said Majed Hamid, the channel’s Baghdad correspondent. Hamid said the station had been receiving threats for several days.

Gunmen also attacked the offices of Iraq’s private Dajla and NRT news channels, according to employees at the stations. Both of those stations are privately owned.

Scrambling to contain the demonstrations, Iraqi leaders called an emergency session of parliament Saturday to discuss the protesters’ demands. But they lacked a quorum due to a boycott called by influential Shiite cleric Muqtada al-Sadr, leader of parliament’s largest bloc. On Friday, al-Sadr called on Prime Minister Abdul-Mahdi’s government to resign and hold early elections, saying the shedding of blood of Iraqis “cannot be ignored.”

Abdul-Mahdi said in an address to the nation that the protesters’ “legitimate demands” had been heard, but he defended the deadly response of security forces as a “bitter medicine” that was necessary for the country to swallow.

In a desperate attempt to curb the growing rallies, authorities blocked the internet Wednesday and imposed a round-the-clock curfew on Thursday. The curfew, ignored by protesters, was lifted at 5 a.m. Saturday, allowing shops to open and traffic to flow in most of Baghdad before the new demonstrations began.

As in previous days, protesters waited to gather until the afternoon, when temperatures were cooler and ensured greater participation, and security forces responded by opening fire.

Health and security officials said more than a dozen people were killed and about 40 wounded in the capital on Saturday when security forces opened fire during protests in various neighborhoods, including central Tahrir Square, which remained closed to cars, and around which special forces and army vehicles deployed in an operation that extended as far as 2 kilometers (1.2 miles) away. The forces also unleashed tear gas, said health, police and medical officials who spoke on condition of anonymity because they were not allowed to brief reporters.

A protester who refused to be named for fear of repercussions said anti-riot police directly opened fire at the protesters. The military initially tried to stop the police but ultimately left the area, the protester said.

In a smaller, peaceful rally earlier Saturday in the capital, demonstrators raised banners demanding the resignation of Abdul-Mahdi and an investigation into the killings of protesters.

Thousands of protesters also took to the streets in the southern cities of Nasiriyah and Diwaniyah, defying a curfew still in place there. In Diwaniyah, at least one protester was killed as demonstrators marched toward local government offices, a medical official and human rights official said. They did not provide details.

In the restive city of Nasiriyah, demonstrators torched the offices of three political parties and a lawmaker. Security forces responded with gunfire, but there was no immediate word on casualties, said the officials, who described the protest as “very large.”

Abdul Mahdi’s office and Parliament Speaker Mohammed al-Halbusi have called on protest representatives to meet with them so they could hear their demands. In a televised meeting in parliament, al-Halbusi met with a group of Iraqis and tribal representatives, mostly in their 50s and older, to discuss the country’s myriad problems. Al-Hablusi repeated promises to address unemployment and poverty.

But the promises did nothing to stop the unfolding street violence. The deadliest day was Friday, when 22 people were killed in Baghdad. Health officials said many of those victims were wounded in the head and chest.

Left: A demonstrator holds an Iraqi flag at a protest after the lifting of the curfew, following four days of nationwide anti-government protests that turned violent, in Baghdad, Iraq October 5, 2019. Photo by Thaier Al-Sudani/Reuters.