Shadowy Ethiopian massacre could be ‘tip of the iceberg’

UMM RAKOUBA, Sudan  — The only thing the survivors can agree on is that hundreds of people were slaughtered in a single Ethiopian town.

Witnesses say security forces and their allies attacked civilians in Mai-Kadra with machetes and knives or strangled them with ropes. The stench of bodies lingered for days during the early chaos of the Ethiopian government’s offensive in the defiant Tigray region last month. Several mass graves have been reported.

What happened beginning Nov. 9 in the agricultural town near the Sudanese border has become the most visible atrocity in a war largely conducted in the shadows. But even here, much remains unclear, including who killed whom.

Witnesses in Mai-Kadra told the Ethiopian Human Rights Commission and Amnesty International that ethnic Tigrayan forces and allies attacked Amhara — one of Ethiopia’s largest ethnic groups but a minority in Tigray. In Sudan, where nearly 50,000 people have fled, one ethnic Amhara refugee gave The Associated Press a similar account.

But more than a dozen Tigrayan refugees told the AP it was the other way around: In strikingly similar stories, they said they and others were targeted by Ethiopian federal forces and allied Amhara regional troops.

It’s possible that civilians from both ethnicities were targeted in Mai-Kadra, Amnesty now says.

“Anyone they found, they would kill,” Tesfaalem Germay, an ethnic Tigrayan who fled to Sudan with his family, said of Ethiopian and Amhara forces. He said he saw hundreds of bodies, making a slicing gesture at his neck and head as he remembered the gashes.

But another refugee, Abebete Refe, told the AP that many ethnic Amhara like him who stayed behind were massacred by Tigrayan forces.

“Even the government doesn’t think we’re alive, they thought we all died,” he said.

The conflicting accounts are emblematic of a war about which little is truly known since Ethiopian forces entered Tigray on Nov. 4 and sealed off the region from the world, restricting access to journalists and aid workers alike. For weeks, food and other supplies have run alarmingly low. This week Ethiopia’s security forces shot at and briefly detained U.N. staffers making the first assessment of how to deliver aid, a senior Ethiopian official said.

Ethiopia’s government and the Tigray one have filled the vacuum with propaganda. Each side has seized on the killings in Mai-Kadra to support its cause.

The conflict began after months of friction between the governments, which now regard each other as illegitimate. The Tigray leaders once dominated Ethiopia’s ruling coalition, but Prime Minister Abiy Ahmed sidelined them when he came to power in 2018.

Long-held tensions over land in western Tigray, where Mai-Kadra is located, between Tigrayans and Amhara have added fuel to the fire.

Amnesty International said it confirmed that at least scores, and likely hundreds, of people were killed in Mai-Kadra, using geolocation to verify video and photographs of the bodies. It also remotely conducted “a limited set of interviews.”

But Mai-Kadra “is just the tip of the iceberg,” Amnesty researcher Fisseha Tekle told an event on Tuesday as fears grow about atrocities elsewhere in Tigray. “Other credible allegations are emerging … not only in Mai-Kadra but also” in the nearby town of Humera, the town of Dansha and the Tigray capital, Mekele. 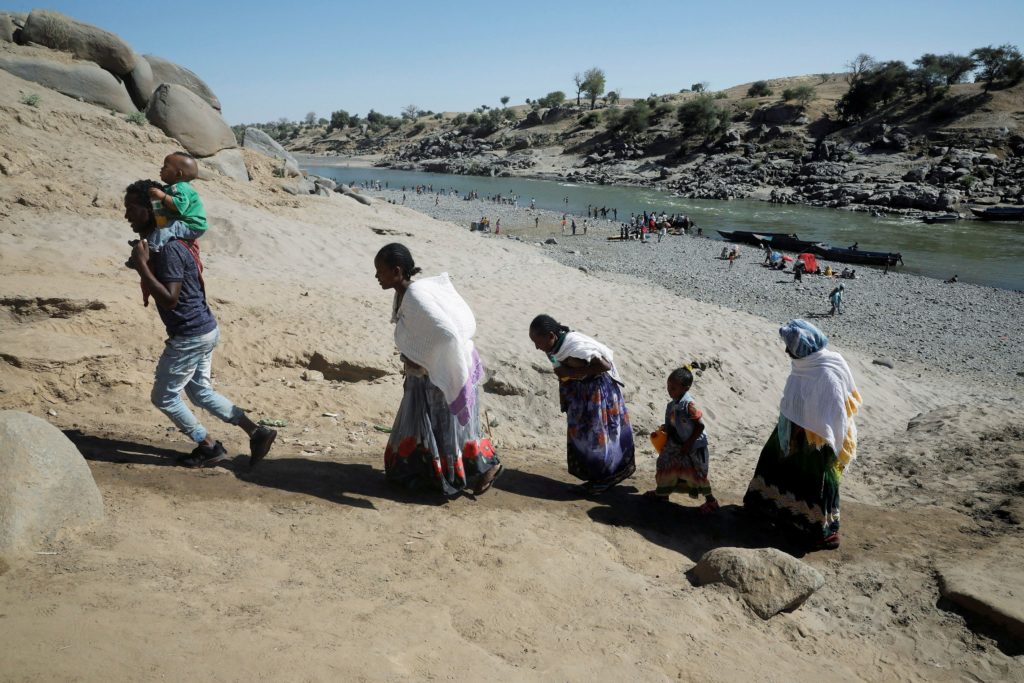 Ethiopians who have just crossed a river from Ethiopia to Sudan to flee from the Tigray region, walk towards the Hamdeyat refugees transit camp, which houses refugees fleeing the fighting, on the border in Sudan, December 1, 2020. Photo by Baz Ratner/File Photo/ Reuters.

“The streets were still lined with bodies yet to be buried” days later, the commission said. One man who looked at identity cards of the dead as he cleared away the bodies told Amnesty International that many of them said Amhara.

But several ethnic Tigrayans who have fled blamed Ethiopian and allied Amhara regional forces for killings in the same town at the same time, saying some asked to see identity cards before attacking.

In some cases, they said they recognized the killers as their neighbors.

Samir Beyen, a mechanic, said he was stopped and asked if he was Tigrayan, then beaten and robbed. He said he saw people being slaughtered with knives, and dozens of rotting corpses.

“It was like the end of the world,” he recalled. “We could not bury them because the soldiers were near.”

Cut off from their homes, refugees now wait in Sudan in bare concrete houses or under shelters lashed together from plastic and branches, playing checkers with Coca-Cola bottle caps or stretching out on mats to sleep, seeking a brief escape from ghastly memories.

The AP has been unable to obtain permission to travel to the Tigray region and has been unable to independently verify the reports of the massacre. Neither Amnesty International nor the Ethiopian Human Rights Commission agreed to requests to speak with witnesses they interviewed.

The Ethiopian commission, an entity created under the country’s constitution, called its findings preliminary. Its researchers were allowed by the federal government to visit Mai-Kadra, but when asked whether it was being allowed to also investigate other alleged atrocities, spokesman Aaron Maasho replied, “We’re working on it.”

The U.N. human rights office this week called for independent investigations into the conflict, but Ethiopian officials have rejected what they call interference, saying this week the government doesn’t need a “babysitter.”

To assume the government can’t do such work itself “is belittling,” senior Ethiopian official Redwan Hussein told reporters on Tuesday.

The prime minister has called the killings in Mai-Kadra “the epitome of moral degeneration” and even expressed suspicion that the perpetrators may have fled to Sudan and could be hiding among the refugees. Abiy offered no evidence, only pointing to the number of young men among the refugees — though roughly half are women.

The prime minister also has rejected allegations of abuses by the Ethiopian defense force, saying it “has not killed a single person in any city” during the conflict.

But the Tigray leader, Debretsion Gebremichael, blamed the “invading” federal forces for the killings, telling the AP that “we’re not people who can commit this crime, ever.”

The ethnic frictions and profiling must stop, the U.N. human rights chief Michelle Bachelet warned this week, saying they are “fostering divisiveness and sowing the seeds for further instability and conflict” — in a region already rife with both.