Slovenia has begun building a razor-wire fence along its border with Croatia.

According to multiple news sources, trucks carrying the materials to build razor-wire fences arrived at Slovenia’s southern border Wednesday morning. Soldiers then proceeded to roll out the fences along the Slovenian side of the border.

The construction comes a day after Prime Minister Miro Cerar told reporters that the country would begin placing ‘technical obstacles’ along its 400-mile border with Croatia. In that talk, Carar stressed that the obstacles were meant to direct migrants to border crossings, and that the border itself would remain open.

Slovenia has seen increased migrant traffic this year as it is part of the so-called Balkan route, a land route migrants take from Greece to Germany. The number of migrants arriving in the country sharply increased over the past month since Hungary built a fence along its border with Serbia and Croatia in October. When Hungary closed its southern border, it effectively forced migrants into Slovenia. Over 170,000 migrants have passed into Slovenia since Hungary closed its border, with another 30,000 expected over the next few days. 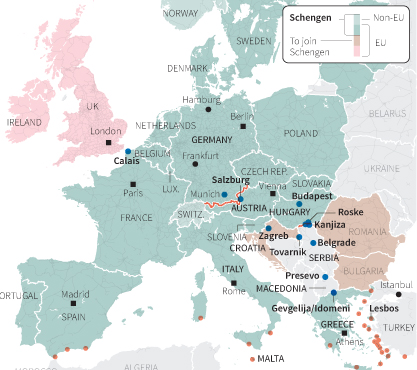 Cerar has said that Slovenia, which has a population of only 2 million, is unable to accommodate large amounts of migrants, many of whom may remain in the country for a long period of time. To the north of Slovenia, Austria has been under pressure from the far-right to restrict the number of migrants coming into the country. Last month, the country announced plans to build a fence at its border with Slovenia, and there have been rumors that Austria is also planning to restrict the number of new arrivals.

The EU as a whole has been struggling with record numbers of migrants crossing into the Eurozone. The immigrants are overwhelmingly from war-torn countries such as Syria, Iraq and Afghanistan. The exodus marks the largest mass migration since the end of World War II.

The tides of people have greatly impacted poorer countries, including Hungary, Greece and Turkey, where migrants tend to arrive first. The journey is also fraught with danger for the migrants themselves. So far more than 2,600 people have died trying to cross the Mediterranean, and horrific incidents including the death of 71 migrants found abandoned in a truck demonstrates that even the land routes are far from safe.

Although there has been talk of cooperative solutions to the problem, including each country pledging to accept a certain number of migrants, no solution has yet been found.

Left: A migrant boy waits to enter a makeshift camp at the Austrian/Slovenian border. Slovenia has stated that it will be putting obstacles on its border with Croatia to prevent migrants entering the country. Photo by Reuters/Leonhard Foeger.