In his first public address since an EgyptAir flight mysteriously plummeted into the Mediterranean and killed 66 on Thursday, Egypt’s President Abdel-Fattah el-Sissi said Sunday he has sent a submarine to continue a search for clues.

Scant evidence has made it hard to know what caused flight 804, which was on its way from Paris to Cairo, to go dark and plunge into the sea about 30 minutes before its scheduled landing. And Sissi warned not to speculate while announcing the submarine will be searching for the cockpit voice and flight data recorders.

“There is not one scenario that we can exclusively subscribe to … all scenarios are possible,” Sissi said as he spoke Sunday at the opening of a fertilizer plant in northern Egypt, according to footage of the event.

On Saturday a spokesman for the French air investigation agency Le Bureau d’Enquêtes et d’Analyses said that a detection system had sent a burst of error messages indicating there was smoke aboard before it disappeared from the radar.

The signals “generally mean the start of a fire,” spokesman Sebastien Barthe told the Associated Press, while stressing investigators have not come to any conclusions.

Seven messages over a 3-minute span included alarms about smoke in the lavatory as well as the aircraft’s avionics area under the cockpit, according to Aviation Herald, an Austria-based website specializing in air accidents.

As officials try to figure out whether the crash was an accident or an attack, an aviation expert told Reuters that the signals don’t indicate the cause one way or another.

“The question now is whether the fire that caused the smoke was the result of an electrical fault – for example a short-circuit caused by damaged wiring – or whether some form of explosive or incendiary device was used – for example by a terrorist – to generate a fire or other damage,” aviation safety expert David Learmont told Reuters.

Egypt officials have found human remains, wreckage and the personal belongings of passengers floating in the Mediterranean about 290 km (180 miles) north of Alexandria, according to Reuters. All 10 crew members and 56 passengers, mostly from Egypt and France, are presumed dead.

There were also citizens of Britain, Belgium, Saudi Arabia, Sudan, Chad, Portugal, Algeria, Kuwait and Canada on board, including two babies and one child.

So far, at least thirteen of the victims have been identified.

Egyptian officials have not ruled out any causes, and are conducting a joint investigation with help from French officials.

French Foreign Minister Jean-Marc Ayrault said he and other officials from France and Egypt had met with about 100 family members to express “our profound compassion” over the crash, the AP reported.

He said after the meeting that, “All the hypotheses are being examined – none are being favored.” 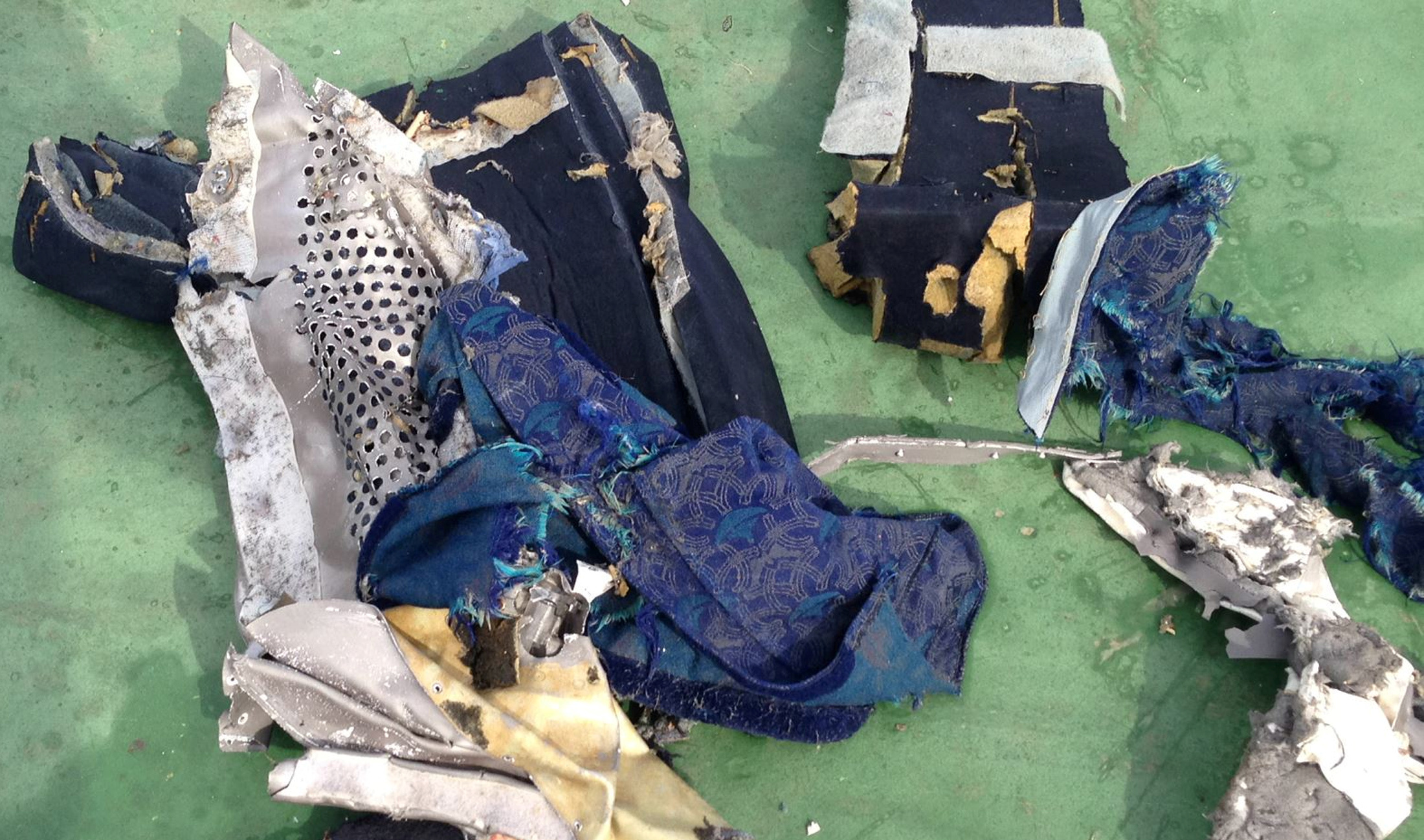 Part of a plane chair among recovered debris of the EgyptAir jet that crashed in the Mediterranean Sea is seen in this handout image released May 21, 2016 by Egypt’s military. Egyptian Military/Handout via Reuters

The plane was on the ground at four different airports, the Eritrean capital Asmara, Cairo, Tunis and Paris, in the 24 hours before the crash.

The Egyptian military on Saturday also posted the first pictures of debris from the Airbus 320 on its spokesman’s Facebook page as officials continued to comb the sea, which can reach depths up to 10,000 feet, for more clues. The pictures show pieces of seats, life jackets and one blue and white cloth with the Egyptian Air logo.

This is a new blow to Egypt’s travel industry following several other incidents that have occurred since October.

A Russian airliner with 224 people on board was brought down by a suspected Islamic State bombing after it took off from Sharm el-Sheikh airport, a resort area, in late October. And man wearing a fake suicide belt hijacked another EgyptAir plane in March.

Left: Relatives of the Christian victims of the crashed EgyptAir flight 804 attend an absentee funeral mass at the main Cathedral in Cairo, Egypt, May 22, 2016. Photo by Mohamed Abd El Ghany/Reuters