KHARTOUM, Sudan — Sudan’s protest movement accepted an Ethiopian roadmap for a civilian-led transitional government, a spokesman said on Sunday, after a months-long standoff with the country’s military rulers — who did not immediately commit to the plan.

Ethiopia has led diplomatic efforts to bring the protest and military leaders back to the negotiating table, after a crackdown against the pro-democracy movement led to a collapse in talks. According to protest organizers, security forces killed at least 128 people across the country, after they violently dispersed the sit-in demonstration outside the military’s headquarters in the capital, Khartoum, earlier this month. Authorities have offered a lower death toll of 61, including three from the security forces.

Yet it appeared that protest leaders, represented by the Forces for the Declaration of Freedom and Change, were open to the Ethiopian initiative as a way out of the political impasse.

Ahmed Rabie, a spokesman for the Sudanese Professionals’ Association which is part of the FDFC, told The Associated Press that the proposal included a leadership council with eight civilian and seven military members, with a rotating chairmanship. All the civilians would come from the FDFC, except for one independent and “neutral” appointee, he said.

According to a copy of the proposal obtained by the AP, the military would chair the council in the first 18 months, and the FDFC the second half of the transition.

Rabie said that the roadmap would build on previous agreements with the military. These include a three-year transition period, a protester-appointed Cabinet and a FDFC-majority legislative body. 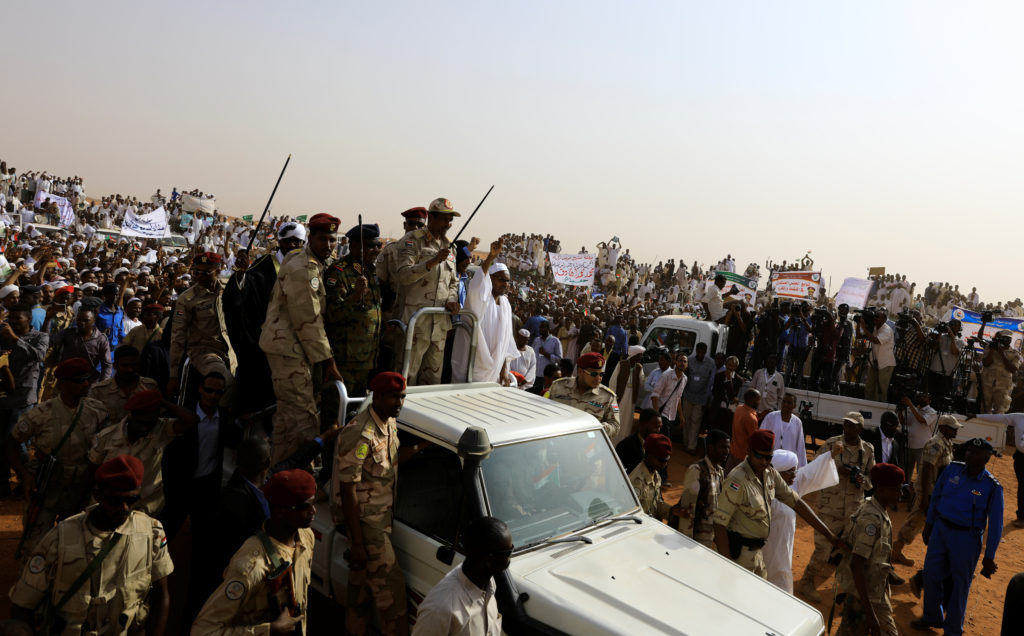 Lieutenant General Mohamed Hamdan Dagalo, deputy head of the military council and head of paramilitary Rapid Support Forces (RSF), greets his supporters as he arrives at a meeting in Aprag village, 60 kilometers away from Khartoum, Sudan, June 22, 2019. Photo by Umit Bektas/Reuters

Rabie added that protest leaders would also discuss with the Ethiopian envoy, Mahmoud Dirir, the possibility of establishing an “independent” Sudanese investigation. Previously, the FDFC had said it would only resume talks with the military if it agreed to the formation of an international commission to investigate the killings of protesters.

The ruling military council has so far rejected the idea of an international probe, and says it has started its own investigation, in parallel with that of the state prosecutor.

The FDCF said Saturday their approval of the Ethiopian plan “pushes all the parties to bear their responsibilities” to find a peaceful solution.

It urged the military council to accept the plan “in order to move the situation in Sudan” forward.

The Ethiopian embassy said that the FDFC had handed a response to its proposals, which included the demand for trust-building measures from the military. These included concerns about the investigation into violence, restoring severed internet connectivity, and ordering the paramilitary Rapid Support Forces — widely blamed for attacks against protesters — back to their barracks.

The spokesman for the military council, Gen. Shams Eddin Kabashi, confirmed at a news conference that the council had received a proposal from the Ethiopian envoy, and another one from the African Union envoy to Sudan, Mohamed El Hacen Lebatt.

“The council asked for a combined initiative to study and discuss the details,” Kabashi said. This joint proposal should be received by Monday, he said.

Kabashi also defended Saudi Arabia and the United Arab Emirates, saying that both countries, along with Egypt, “have provided unconditional support” to the Sudanese people.

Egypt has voiced its support for the military council, pressing the African Union not to suspend Sudan’s activities in the regional block. Saudi Arabia and the UAE have pledged $3 billion in aid to shore up its economy.

Sudanese activists fear that the three countries are pushing the military to cling to power rather than help with democratic change, given that the three Arab states are ruled by autocrats who have clamped down political freedoms in their own countries.

A member of the military council, Yasser al-Atta, suggested that it had doubts about the protest leaders ability to govern.

He addressed protest leaders saying that “you should include other political forces” or it would be difficult to rule.

“We want them to rule and lead the transitional period, but can this be done?” He added.

Meanwhile, the head of the military council, Gen. Abdel-Fattah Burhan, said on Sunday he canceled a decree demanding that the joint U.N.-African Union peacekeeping force in Darfur hand over its premises as part of its withdrawal.

Burhan also issued a new decree that says the U.N. facilities when handed over are to be used for civilian purposes in Darfur.

Left: Sudanese people, seeking to revive a push for civilian rule in ongoing tumult since the overthrow of former President Omar al-Bashir more than two months ago, chant slogans and wave Sudanese flags during a demonstration in Khartoum, Sudan, June 21, 2019. Photo by Umit Bektas/Reuters