A suicide bomber hit a section of Istanbul popular with tourists on Saturday, killing at least four others and wounding dozens.

The blast left behind a bloody scene of carnage in a busy shopping area of the Turkish city filled with shops and frequented by pedestrian traffic.

Two Americans with dual Israeli citizenship, a third Israeli and an Iranian citizen, were among those killed.

The suicide bomber was identified Sunday as a Turkish man with links to the Islamic State, according to the Associated Press.

The White House issued a press release condemning the terrorist attacks on Saturday.

“We are in close touch with Turkish authorities and reaffirm our commitment to work together with Turkey to confront the evil of terrorism,” National Security Council spokesperson Ned Price said in a statement.

Statement by NSC Spokesperson @Price44 on the Terrorist Attack in Turkey: https://t.co/qH8jtRbnwx pic.twitter.com/jyCjOcLQXs

On Saturday, Israeli Prime Minister Benjamin Netanyahu said the bomber may have links to the Islamic State.

“There is information that it is an attack carried out by an ISIS member,” he told reporters. “But this is preliminary information — we are still checking it.”

Officials said no group immediately claimed responsibility for the attack.

The suicide bombing took place near government offices and in an area where police operations are known to be stationed, according to Reuters. 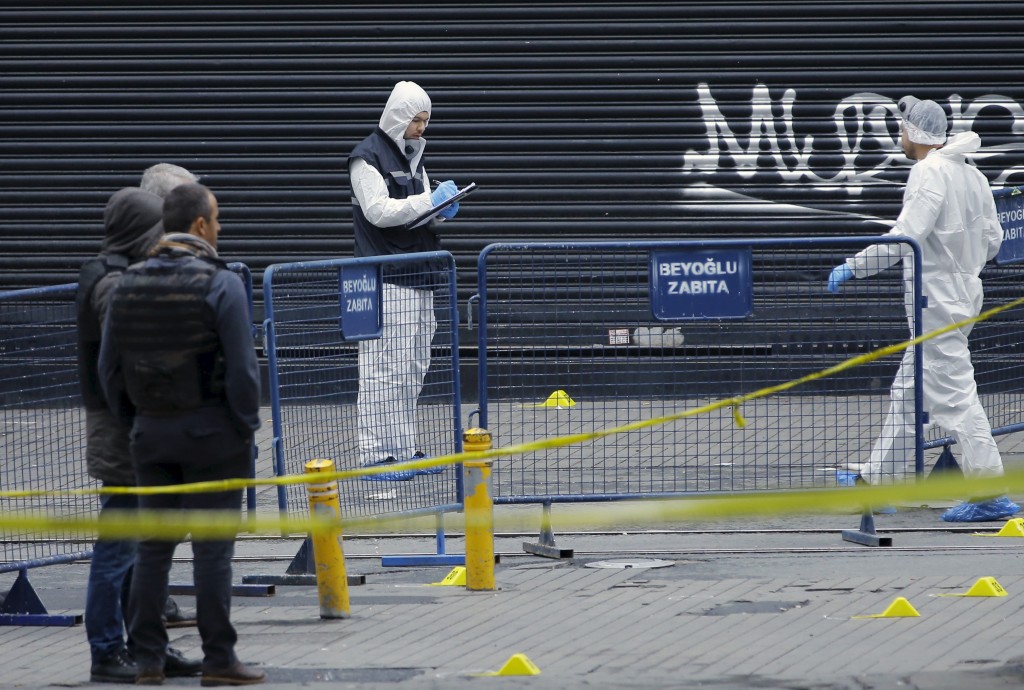 Police forensic experts inspect the area after a suicide bombing in a major shopping and tourist district in central Istanbul, Turkey March 19, 2016. Photo by Huseyin Aldemir/Reuters

One official who spoke on the condition of anonymity told Reuters the bomber had been moving toward a more crowded section of the area, but may have been deterred by the heavy police presence.

“The attacker detonated the bomb before reaching the target point because they were scared of the police,” the official said.

Saturday’s bombing marked the second such attack to strike Turkey in less than a week. On March 13 a suicide bomber set off an explosion in the Turkish capital of Ankara, killing 37 people.

A Kurdish militant group had claimed responsibility for the attack last week at a bus stop in Anakara. The Islamic State was blamed for another January suicide bombing in Istanbul that took the life of 12 German tourists.

Left: A woman reacts following a suicide bombing in a major shopping and tourist district in central Istanbul March 19, 2016. Photo by Kemal Aslan/Reuters