BARCELONA, Spain — New Spanish Prime Minister Pedro Sanchez had been barely sworn in Saturday before one of the country’s most critical issues facing his fragile government was pressed upon him: ending the Catalan secession crisis.

Not even two hours after Sanchez had taken his oath to uphold the Spanish Constitution, Catalan chief Quim Torra demanded to meet with Sanchez and speak “government to government” regarding the future of the restive northeastern region.

“Pedro Sanchez, let us talk, take risks, both you and I, let us sit down at a table and talk, government to government,” Torra said after swearing in his Cabinet in Barcelona.

Torra, who was chosen by separatist lawmakers to lead the region last month, said that his government “accepts the charge to continue forward with the mandate (.) to form an independent state.”

Sanchez, the leader of Spain’s Socialist Party, came to power after he successfully ousted predecessor Mariano Rajoy, who lost a no-confidence vote in parliament on Friday.

In order to cobble together the support to cast out Rajoy, Sanchez promised to open talks with Torra in order to get the votes he needed from the Catalan pro-secession lawmakers in the national parliament.

Sanchez said on Thursday that one of the priorities of his government would be “rebuilding bridges” with regions and “establishing the foundations that allow us to normalize relations and start a dialogue between the Spanish government and the new government in Catalonia.”

Sanchez, however, insisted that any solutions for Catalonia must fit within the constitutional framework. Spain’s Constitution calls the nation “indivisible” and says national sovereignty resides in the Madrid-based parliament. 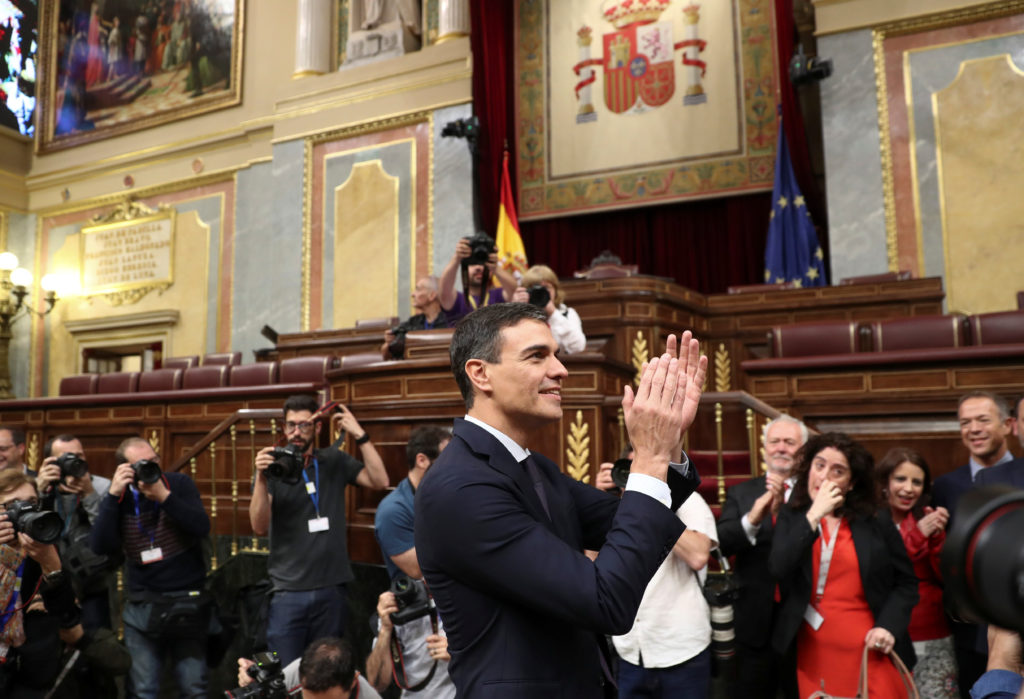 Sanchez had been Rajoy’s most loyal backer of a government takeover of Catalonia’s regional affairs following an illegal- and unsuccessful- declaration of independence by the region’s parliament in October.

That takeover came to an end on Saturday after Torra formed his government, as stipulated by the Senate when it granted the central government the extraordinary powers to intervene in the running of the region.

Torra is a fervent Catalan nationalist and was hand picked by former Catalan leader Carles Puigdemont to succeed him. Puigdemont is fighting extradition from Germany to Spain where he is sought on charges of rebellion and misuse of public funds.

Torra’s prior statements in articles and social media posts deriding Spaniards have been called xenophobic by critics. Torra has recently apologized for those views.

Sanchez himself called Torra “the Spanish Le Pen” in aligning him with the most extreme elements of the European far-right.

Sanchez not only inherits Spain’s worst political crisis in nearly four decades. His government will depend on the support of the far-left Podemos (We Can) party and of a motley crew of regional parties and Catalan secessionists to get anything done in government.

Spain’s parliament voted Friday to replace Rajoy’s government with one to be led by Sanchez a week after a ruling by the National Court delivered hefty prison sentences to 29 business people and ex-members of Rajoy’s Popular Party, including some elected officials, for fraud, money laundering and tax evasion, among other crimes.

Rajoy was in attendance at Saturday’s ceremony held in the royal Zarzuela Palace and shook Sanchez’s hand after the new leader was sworn in by King Felipe VI. The two political rivals then posed for a photo with the monarch.

Sanchez has vowed to fight corruption and help those Spaniards affected by years of public spending cuts under Rajoy’s government. He also pledged to hold an election soon, while not setting a date.

Unlike the new government in Italy, Sanchez and his party are staunch supporters of the European Union and the shared currency.