BEIRUT — They dug trenches around towns, reinforced caves for cover and put up sand bags around their positions. They issued calls to arms, urging young men to join in the defense of Idlib, the Syrian province where opposition fighters expect to make their last stand against Russian- and Iranian-backed government troops they have fought for years.

In its last chapter, just as it has throughout the long, bloody war, the Syrian rebellion’s fate lies in foreign hands. This time, the splintered and diverse rebels have only Turkey.

This time, it’s “surrender or die.”

As the decisive stand for their last stronghold looms, this motley crew of tens of thousands of opposition fighters, including some of the world’s most radical groups, is looking for ways to salvage whatever is possible of an armed rebellion that at one point in the seven-year conflict controlled more than half of the country.

In its last chapter, just as it has throughout the long, bloody war, the Syrian rebellion’s fate lies in foreign hands. This time, the splintered and diverse rebels have only Turkey.

“The whole world gave up on us, but Turkey will not,” said Capt. Nabij al-Mustafa, spokesman for the Turkish-backed umbrella group known as the National Front for Liberation.

Idlib, with its 3 million residents and more than 60,000 fighters, is Turkey’s cross to bear. 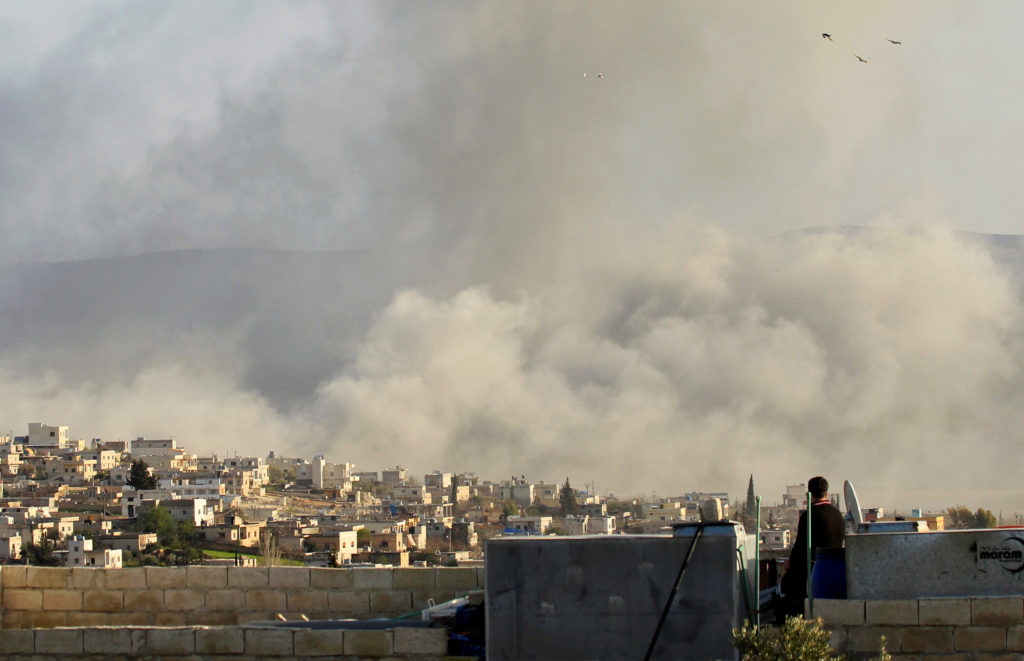 A man watches as smoke rises after what activists said was an air strike on Atimah, Idlib province, on March 8, 2015. Photo by Ammar Abdullah/Reuters

Ankara has appealed to Russia and Iran, its uneasy negotiating partners, for a diplomatic resolution to the ticking bomb. At the same time, it has sent reinforcements of its troops ringing Idlib, a move designed to ward off a ground assault, at least for now.

A wide offensive is only likely after a green light from Russia. But delicate diplomatic moves are at work. Moscow is keen on strengthening ties with Turkey, at a time when Ankara’s relations are at their lowest with the United States. Turkey, by calling on the United States and Europe for support, seems to be playing on that interest to pressure Russia to accept its proposals for a solution on Idlib that avoids an attack.

On Monday, Turkish President Recep Tayyip Erdogan meets for the second time in 10 days with Russia’s Vladimir Putin, this time in Sochi, Russia.

“After proving its influence in Syria and the Middle East, Russia wants to pull Turkey away from the West much more than achieve a military victory over the armed Syrian opposition,” Mustafa Ellabbad, an expert on Turkish-Arab relations, wrote in Kuwait’s al-Qabas newspaper.

The province, the size of Lebanon, has been the beating heart of the rebellion for years. In rebel hands since 2015, it is the largest contiguous territory they controlled. It has access to Turkish borders, securing supply lines for weapons, fighters and aid.

For the past two years, Idlib became the shoe-box into which were pushed an estimated 20,000 rebel fighters from around the country, after their losses to government troops and surrender deals negotiated with Russia and Damascus following devastating sieges. Civilians who refused to go back under government rule were also bussed there, nearly doubling the province’s population. 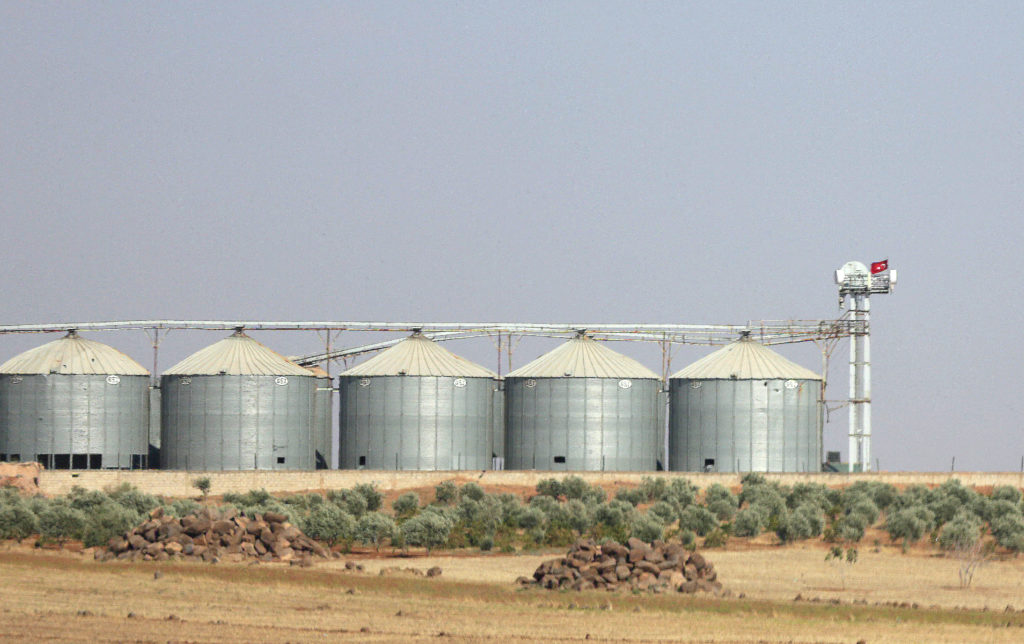 A Turkish flag is seen at a Turkish observation point in Idlib province, Syria July 30, 2018. Photo by Khalil Ashawi/Reuters

Among the estimated 60,000 opposition fighters in Idlib are at least 10,000 radicals affiliated with the al-Qaida-linked group, Hayat Tahrir al-Sham (Arabic for Levant Liberation Committee). Thousands of foreign fighters, from China, Europe and the Middle East, are the backbone of the radical groups.

The Turkish reinforcements are going to 12 observation points that Ankara set up around Idlib last year under a deal with Russia and Iran creating a “de-escalation zone.” The deal also effectively stopped an earlier government advance and set Turkey up as Idlib’s protector.

For the past two years, Idlib became the shoe-box into which were pushed an estimated 20,000 rebel fighters from around the country.

Separately, Turkey has troops stationed in the enclave under its control north and east of Idlib, where it backs Syrian opposition fighters and a civilian administration. It is part of its plan to create a safe area along the border where some of the more than 3 million Syrian refugees it hosts may return.

Ankara initially sent in its troops more than two years ago to push out the Islamic State group and Syrian Kurdish fighters. For Ankara, the increasingly assertive, U.S.-backed Syrian Kurds were an existential threat that encourages the aspirations of its own Kurdish insurgents.

“In the mind of the rebellion, the hope is that from Turkish support they can have … a republic of northern Syria, protected by Turkey like Northern Cyprus,” said Fabrice Balanche, a Syria watcher at the Washington Institute for Near East Policy.

These Turkey-administered areas are likely to be the destination of the displaced and rebels of Idlib in case of an offensive.

An Idlib offensive holds multiple threats for Turkey right on its border — a humanitarian crisis, a security nightmare with thousands of gunmen loose and a defeat to its plans for the safe zone. If Syrian forces retake Idlib with no agreement on the fate of the opposition fighters, they could threaten the Turkey-controlled enclave, and Ankara would lose credibility with the fighters and leverage with Damascus on any future deal.

“There is really no way for the Syrian military and Damascus’ allies to launch a military offensive on Idlib that doesn’t have deeply negative, injurious effects on Turkey. There is no real way they can cushion this for Turkey,” said Sam Heller, a Syria expert in the Brussels-based International Crisis Group.

Turkey’s strategy in the opposition areas has been complicated by the presence of radical fighters. By backing the National Front, it argued it can draw fighters away from the al-Qaida-linked HTS, the dominant power in the province, forcing it to dissolve and creating a new opposition force ready to negotiate with the Syrian government.

The strategy has had limited success.

The National Front in recent months gained control of territory in Idlib from HTS, which still controls nearly 70 percent of the province. HTS began to show signs of splits and two weeks ago, Turkey declared it a terrorist group.

But with the onset of a military offensive, HTS has set up joint operation rooms with different National Front factions.

The HTS spokesman in Idlib said now was not the time to talk about dissolving into Turkish-backed rebel groups. He underlined that an arrangement must eventually be made for the foreign fighters in the group.

“Right now, no sound is louder than that of the battle,” Imad Eddin Mujahed said. “We have many military surprises; enough to upset the balance and ward off aggressors.”

READ NEXT: Syria sets its sights on the last rebel holdout

In rallies around Idlib the last two weeks, protesters took to the streets to deny that the province is a hotbed of extremists. Thousands raised only the flag of the Syrian revolution, a reminder that there was once a popular uprising against Assad, and Idlib is now its last bastion.

Some raised banners reading: “The rebels are our hope and the Turks are our brothers.”

Syrian forces and Iranian-backed militias are likely to avoid a clash with the Turkish troops. But the stance of the Syrian government and Iran is clear-cut: They vow to recapture all Syrian territory and are loath to see an expansion of Turkish and American influence. They argue the West fueled jihadis with past support of the opposition and now must let Syria get rid of them.

Al-Mustafa, the National Front spokesman, said the rebels are prepared for a battle he called “existential.”

But, he added, “our cause will not end if we lose this battle.”