With looming Idlib crisis, what can we expect from another round of Syria peace talks?

The next round of Syria peace talks are scheduled to begin Friday, even as the international community braces for a potential bloodbath in Idlib province, the country’s last rebel stronghold.

The United Nations said a major offensive by the Syrian regime and its allies in the northwestern province could be the “worst humanitarian disaster” of the 21st century, putting at risk more than 3 million people in Idlib and the surrounding areas.

On Saturday, Syrian helicopters reportedly bombed towns in southern Idlib, and the opposition accused Russia of carrying out airstrikes on hospitals and other civilian sites.

Panos Moumtzis, of the U.N. Office for the Coordination of Humanitarian Affairs, said four hospitals in the area were hit over the past few days. Fighting in the region has forced more than 30,000 people to flee to other parts of Syria so far, he said, adding that “the worst may be ahead of us.”

The United Nations warns that hundreds of thousands of Syrians will be forced to leave Idlib province if a Syrian government offensive begins. Photo by Khalil Ashawi/Reuters

Last week, a meeting of key players in the Syrian war — Russia, Turkey and Iran — failed to produce a cease-fire to avoid a full-scale assault on Idlib. Turkey, which borders Syria, pushed for a truce because it already has 3.6 million Syrian refugees and no longer had the capacity to house any more. But Russian President Vladimir Putin said a cease-fire would be pointless since it wouldn’t involve Islamist militant groups that have entered the region. Iranian President Hassan Rouhani said countering terrorism is an unavoidable part of the mission in Idlib and restoring peace to Syria.

The countries did issue a statement at the end of the summit saying there was no military solution and that the seven-year conflict could only end through a negotiated political process.

Will the current talks yield a political solution or will they be stymied by an offensive on Idlib? We spoke to several analysts.

Who is participating in Friday’s talks?

The U.S., Britain, Saudi Arabia, Jordan, Germany, France and Egypt are slated to participate in the United Nations-led talks, which will take place in Geneva on Sept. 14. The talks follow the summit between Russia, Turkey and Iran earlier this month.

The U.N. envoy for Syria, Staffan de Mistura, is trying to bridge the two parallel diplomatic tracks, known as Geneva and Astana, in order to bring together a consensus on moving forward on a constitutional committee, said Mona Yacoubian, a senior adviser for Syria, Middle East and North Africa at the U.S. Institute of Peace.

The Syria constitutional committee, once formed, would draft a new constitution and pave the way for new elections, which would be part of an eventual political settlement to the conflict, she said.

However, one questions that has dogged the discussions for years is who gets to participate from the Syrian opposition and whether they are genuine opposition members with constituencies within Syria, Yacoubian said. Typically, the negotiations have involved representatives from President Bashar al-Assad’s government and Syrian opposition. Western-backed Kurdish forces — who control vast swaths of Syria’s northeast — and extremist Islamist fighters have not been involved in mediation efforts. 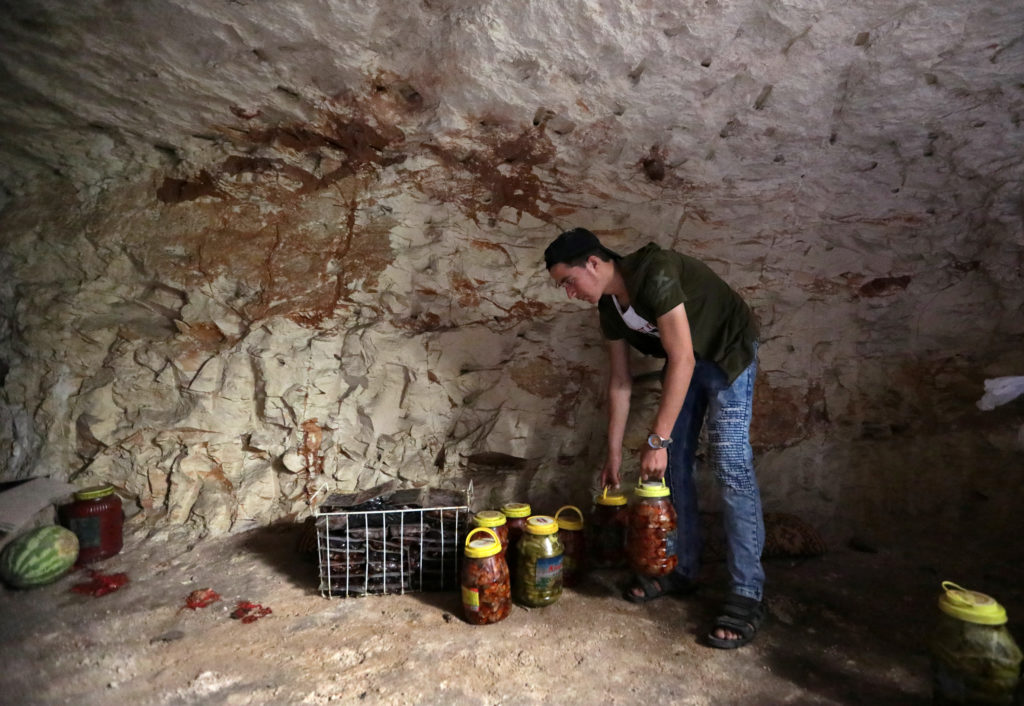 A man stores pickled vegetables in an underground cave in Idlib in case bombing starts on the rebel stronghold. Photo by Khalil Ashawi/Reuters

What might come out of the next round of talks?

Yacoubian said she didn’t hold much hope that the talks would yield anything immediately helpful to the situation on the ground. “I think the problem with the Geneva process is that it’s become increasingly moribund, increasingly detached from developments on the ground inside Syria,” she said.

Anne Barnard, a visiting fellow at the Council on Foreign Relations who covered much of the Syrian war as the New York Times’ Beirut bureau chief, noted that past Geneva talks have yielded few results, partly because Russia, Turkey and Iran appear to be the players with the most leverage on the ground in Syria.

“There hasn’t been any traction in recent years on negotiations,” Barnard said. “It’s all been about, can we even get these parties — the government and the opposition — in the room together.”

The question is whether Friday’s meeting in Geneva will tackle even minor reforms in Syria, “or is this basically going to put a stamp on a Syrian government victory,” she added.

Is the U.S. playing a larger role?

Last month, the Trump administration announced a new team to lead its diplomatic efforts on Syria, headed by former Ambassador James Jeffrey, who served as envoy to both Iraq and Turkey. The delegation is also part of the broader effort to force the Islamic State group out of Syria.

“The conflict in Syria has continued for far too long,” Secretary of State Mike Pompeo tweeted on the day he swore in Jeffrey as the new representative for Syria engagement. The State Department will seek to forge a political solution, including constitutional reform and new elections under the U.N. resolution, Pompeo said.

The move indicates a renewed American effort on Syria, but only time will tell if the U.S. will be more specific “about what they’re willing to do and what kind of pressure will be put to bear on the Syrian government,” Barnard said. 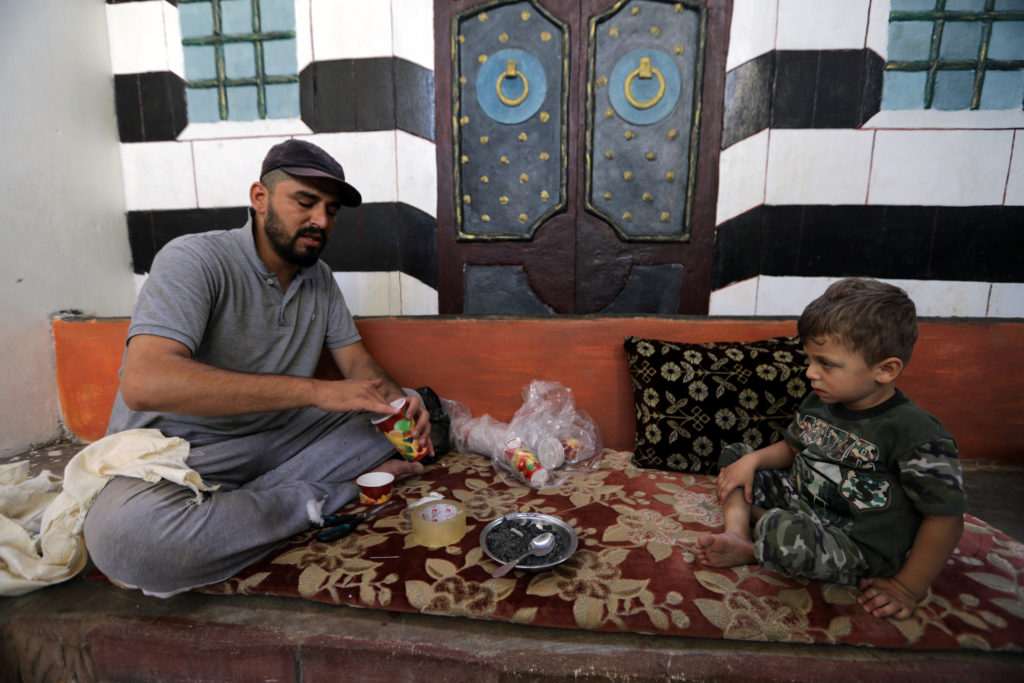 A Syrian man fills paper cups with cotton and charcoal in Idlib, Syria, to use as makeshift gas masks if the province is bombed with chemical weapons. Photo by Khalil Ashawi/Reuters 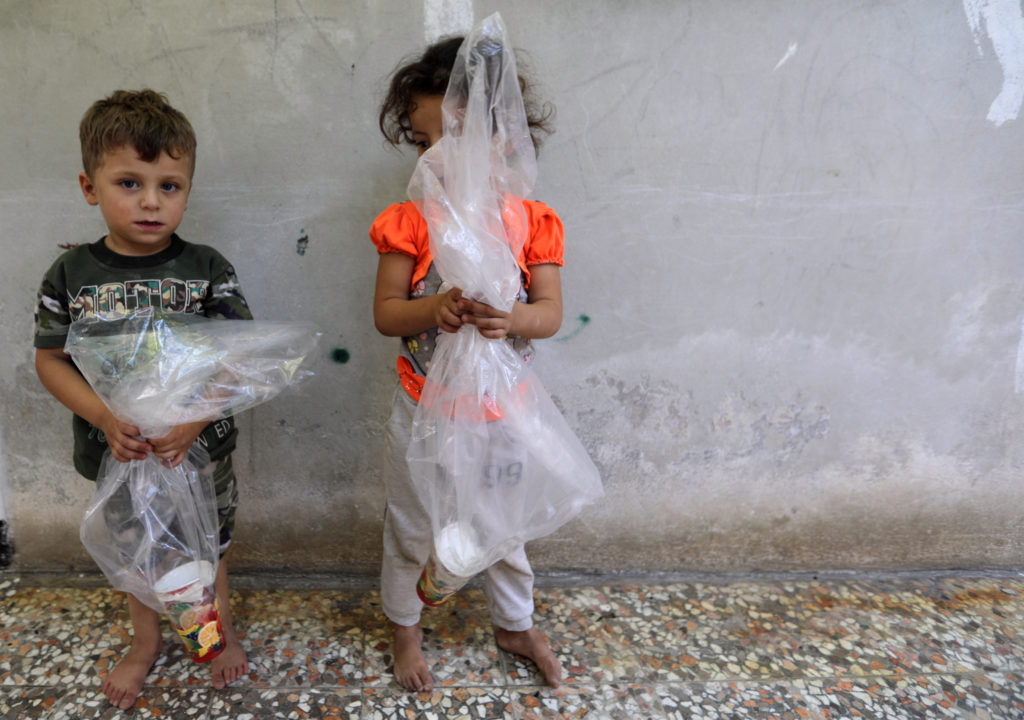 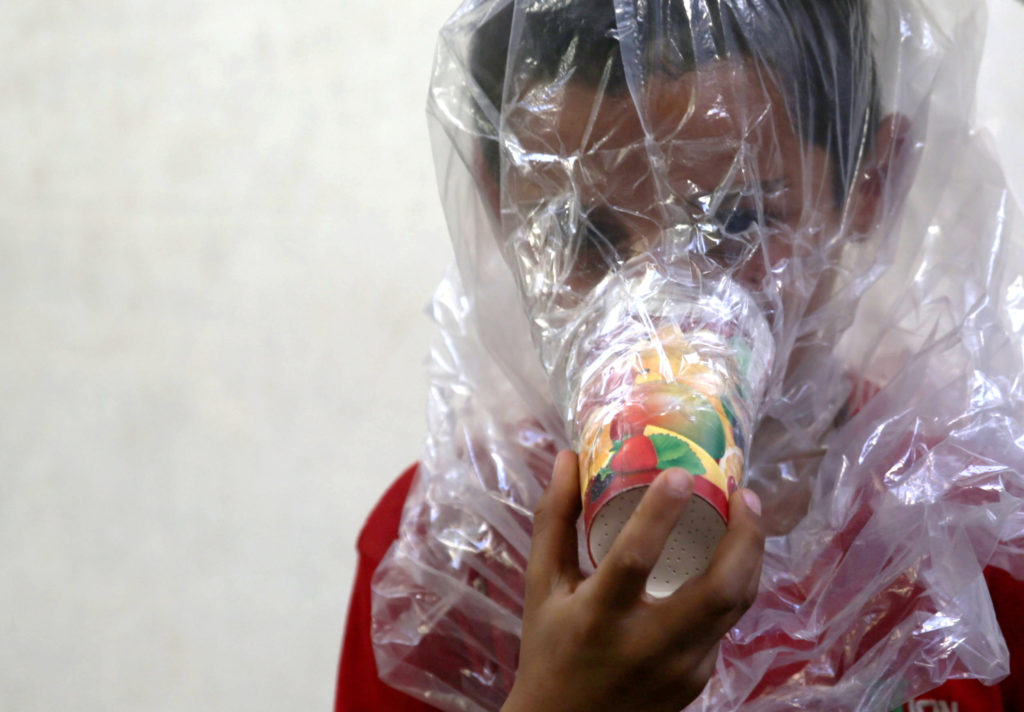 A boy tries on a homemade gas mask before an anticipated offensive on Idlib. Photo by Khalil Ashawi/Reuters

The Syrian war has claimed an estimated 400,000 lives in its more than seven years, displaced about 6 million Syrians inside the country and forced another 5 million refugees into neighboring countries, according to the U.N. Over the years, key players have engaged in negotiations meant to help bring about an end to the war.

March 2011: Syrian civil war begins between Assad’s government and opposition forces as an offshoot of the Arab Spring uprisings across the Middle East and North Africa.

March 2012: U.N. special envoy Kofi Annan and the Arab League envoy to Syria submit a six-point plan to the U.N. Security Council that calls on all sides to stop fighting and work with the U.N. on an “inclusive Syrian-led political process.”

June 2012 — Geneva I: U.S., Russia and other leaders meet in Geneva and agree on a roadmap to peace that would create a transitional governing body to oversee new elections. Assad counters with his own peace plan in 2013, which the Syrian opposition rejects.

2014 — Geneva II: Another round of talks fail when the Syrian government and opposition groups cannot agree on terms. Assad wins presidential elections later that year. The last of Syria’s chemical weapons are shipped out of the country under a Russia-brokered deal.

2015 — Vienna process: The International Syria Support Group, made up of 20 members, meet in Vienna and establish a framework under which the Syrian government and opposition would enter U.N.-led negotiations. A U.N. Security Council resolution (2254) calls for the end of attacks on civilians, a new constitution and new elections within 18 months.

2017 — Geneva IV: The Syrian opposition and government hold indirect talks with Russia as a go-between. They end without a breakthrough, but with the promise of more negotiations.

2017 — Geneva V-VIII: De Mistura, who is now the U.N. envoy for Syria, says all sides agree to the U.N. resolution for a political transition, but Geneva VI talks later collapse. Later in the year, Geneva VII and VIII talks end without a breakthrough.