Taiwan elected its first female president on Saturday, a member of a pro-independence party, in a victory over her nationalist rival that caused China to issue a stern warning of caution.

Tsai Ing-wen, 59, called for unity during her victory speech on Saturday, stating she would seek a “consistent, predictable and sustainable” relationship with China after it was announced she had taken approximately 56 percent of the vote.

“Both sides have a responsibility to do their utmost to find mutually acceptable ways to interact with respect and reciprocity and ensure no provocation and no surprises,” Tsai said, who leads the Democratic Progressive Party.

The two governments have been meshed for decades in a confusing diplomatic tangle but have increasingly been linked economically, also forming a relative level of peace over the last eight years.

China views Taiwan as a secessionist province, one that it has threatened to retake with force, while Taiwan calls itself a sovereign state.

The scenario began playing out after World War II, when allied forces handed control of Taiwan to China. China has been aiming hundreds of missiles at Taiwan since members of Chinese nationalists  fled the mainland and Communists came to power during China’s civil war, according to Reuters.

Taiwan has a separate constitution and democratic elections and uses its own military force with 300,00 active troops. 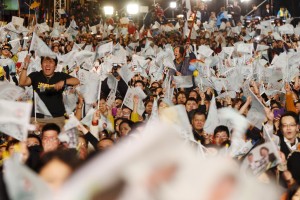 President-elect Tsai favors independence for Taiwan but had struck a conciliatory note during her campaign with the island’s mainland neighbor, though she indicated she would not budge on issues of Taiwan’s sovereignty.

“Our democracy, national identity and international space must be fully respected and any suppression would undermine the stability of cross-strait relations,” she said.

After her victory, China on Saturday said it would not allow an independent Taiwan, stating that the two governments would eventually be merged into one.

“On important issues of principle like protecting the country’s sovereignty and territorial integrity our will is as hard as rock,” said a statement released by Chinese state media.

The United States on Saturday congratulated Tsai and said it holds “profound interest” in maintaining stability between China and Taiwan.