TAIPEI, Taiwan — Tsai Ing-wen was reelected as Taiwan’s president by a landslide Saturday in a victory that signaled strong support for her tough stance against China among voters determined to defend their democratic way of life.

Tsai, from the Democratic Progressive Party, soundly defeated Nationalist Party candidate Han Kuo-yu, receiving 57.2% of the vote to Han’s 38.6%, with virtually all of the votes counted. She wasted no time in warning communist-ruled China, which views Taiwan as a renegade province, not to try to use threats of force against the self-governed island.

“I hope that Beijing will show its goodwill,” she said. Taiwan’s voters have “shown that when our sovereignty and democracy are threatened, the Taiwan people will shout our determination even more loudly.” 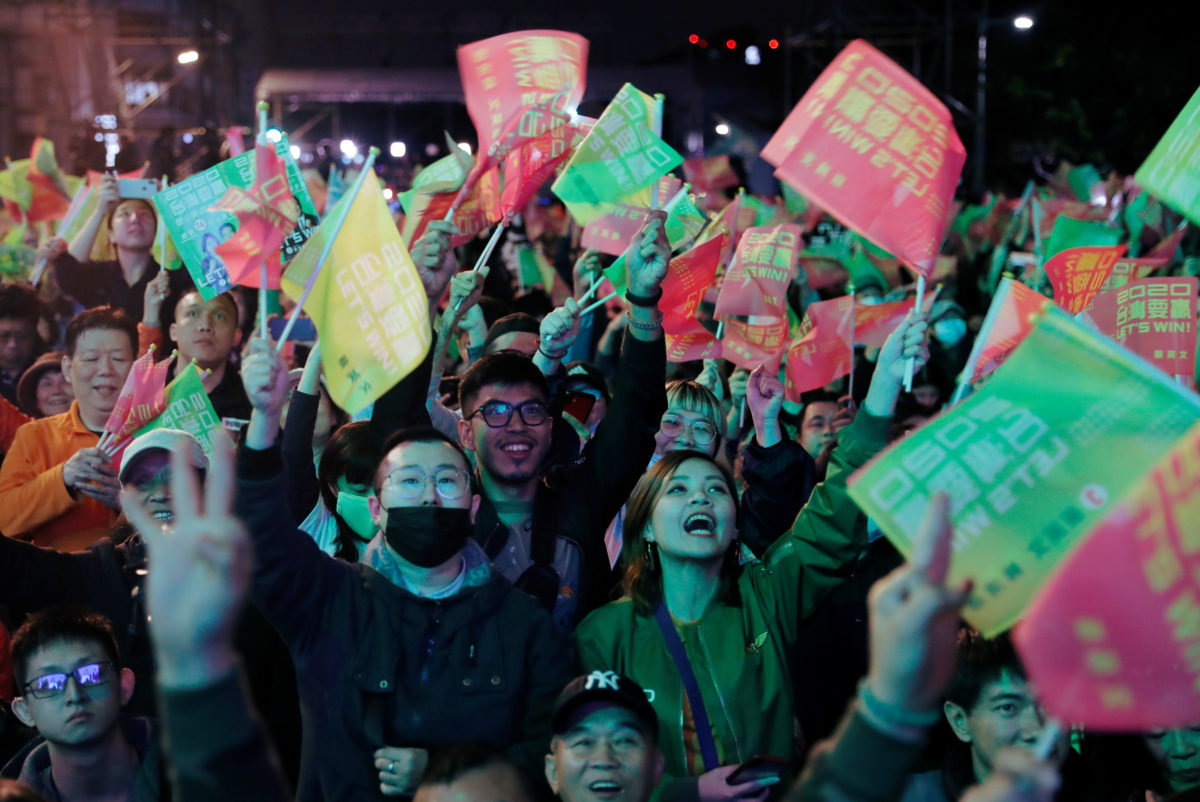 Taiwan has developed its own identity since separating from China during civil war in 1949, but has never declared formal independence. Beijing still claims sovereignty over the island of 23 million people and threatens to use force to seize control if necessary.

Ma Xiaoguang, a spokesman for China’s Taiwan Affairs Office, said that China would firmly protect its territorial integrity and opposes any separatist schemes and Taiwan independence, according to the official Xinhua News Agency.

China is willing to work with the Taiwanese people to advance the “peaceful reunification of the country,” he said.

In a setback for Beijing, Tsai managed to win in areas that traditionally have gone to the China-friendly Nationalists in central and southern Taiwan. Her party also retained its majority in the 113-seat Legislative Yuan, though the vote was closer there.

She said the results of the election, with turnout estimated at 74%, proved that Taiwanese are committed to defending their democracy and way of life.

Given China’s efforts to isolate Taiwan during Tsai’s first term, her victory will likely bring on still more deadlock and pressure from Beijing, she acknowledged.

At around the same time Tsai was giving her victory speech, Xinhua issued a brief report saying she had won reelection as “leader of the Taiwan region.” That language was in keeping with the government’s refusal to recognize Taiwan as an independent political entity and its leader as a head of state.

Barring a surprise breakthrough, the Chinese leadership is likely to persist in ramping up pressure on Taiwan. In the past two years, it has cut off all formal ties with her government, restricted visits by Chinese tourists, excluded Taiwan’s representatives from international gatherings and lured away more of the island’s dwindling diplomatic allies, leaving it with just 15.

In recent months, Beijing has held military exercises across the Taiwan Strait, sailed both of its aircraft carriers through the waterway dividing Taiwan from the mainland and flown air patrols around the island.

An editorial issued by the Communist Party’s Global Times newspaper after the election accused Tsai and her party of tricks and “fear mongering.”

Tsai’s overwhelming victory shows a public increasingly unified in the face of China’s pressure and threats, something her challenger Han appeared to acknowledge after the results were in.

“No matter what, the most important thing is that we unite as one Taiwan,” Han told supporters at a rally after conceding the loss.

Months of anti-government protests in Hong Kong, a semi-autonomous Chinese territory, have driven home to many in Taiwan the contrast between their democratically governed island and authoritarian mainland China.

While Han and the Nationalist Party have said Taiwan should be more open to negotiations with China, Tsai and her Democratic Progressive Party insisted that the protests showed that the “one country, two systems” approach Beijing has championed for governing both Hong Kong and Taiwan is unworkable.

Chinese President Xi Jinping has sought to compel Tsai’s government to endorse Beijing’s insistence that Taiwan is a part of China. Tsai has refused to do so, maintaining that Beijing has no claim over Taiwan while calling for a reopening of talks between the sides without preconditions.

At the same time, Tsai is unlikely to adopt a more militant stance in favor of outright independence, said Shelley Rigger, a visiting researcher with National Taiwan University’s College of Social Sciences, adding that Tsai also is not likely to soften toward Beijing.

“I think Tsai Ing-wen has been moderate because she’s committed to a course of action that maximizes both Taiwan’s security and flexibility,” she said.

Since its transition to full democracy beginning in the 1980s, Taiwan has increasingly asserted its independent identity from China even though it is not recognized by the United Nations or any major nation. Saturday’s election was its seventh presidential vote since the island began a transition from martial law under the Nationalists to democracy.

The island exercises all the roles of a sovereign nation, issuing its own passports, maintaining its own military and legal system and serving as a crucial hub in the global high-tech supply chain.

In her victory speech late Saturday, Tsai urged the rest of the world to respect Taiwan’s commitment to democracy and consider the island a “partner, not an issue.”

Tsai, who holds a doctorate in law from the London School of Economics, has emphasized strong relations with the United States to help counter China’s attempts to isolate Taiwan diplomatically. The U.S. does not recognize Taiwan as a country, but it is its main supplier of military equipment.

U.S. Secretary of State Mike Pompeo congratulated Tsai on Saturday, saying in a statement, “The United States thanks President Tsai for her leadership in developing a strong partnership with the United States and applauds her commitment to maintaining cross-Strait stability in the face of unrelenting pressure.”

On the domestic front, Tsai faces challenges in trying to reform the government and economy, reduce inequality, create jobs and raise wages.

“We will work even harder to build on our achievements of the past four years,” Tsai said in her speech. “We will constantly remind ourselves our administration must be clean, confident and efficient.”

She added, “Of course we will work to keep our country safe and defend our sovereignty.”

Left: Incumbent Taiwan President Tsai Ing-wen waves to her supporters after her election victory at a rally, outside the Democratic Progressive Party (DPP) headquarters in Taipei, Taiwan January 11, 2020. Photo by Tyrone Siu/Reuters.