KABUL, Afghanistan (AP) — The Taliban on Tuesday defended their suicide bombing against an international compound in the Afghan capital that killed at least 16 civilians and wounded 119 people, just hours after a U.S. envoy said he and the militant group had reached a deal “in principle” to end America’s longest war.

Angry Kabul residents whose homes were shredded in the explosion climbed over the buckled blast wall and set part of the compound, a frequent target of the militants, on fire. Thick smoke rose from the Green Village, home to several foreign organizations and guesthouses, whose location has become a peril to nearby local residents as well.

“People were screaming and saying, ‘My children are trapped in the rubble,'” one witness, Faiz Ahmad, said. A large crater was left in the street.

The Taliban continue such attacks even as a U.S. envoy says the deal with the insurgents only needs the approval of President Donald Trump to become a reality. The accord would include a troop withdrawal that the Taliban already portray as their victory.

Taliban spokesman Zabihullah Mujahid told The Associated Press that “we understand that peace talks are going on … but they must also understand that we are not weak and if we enter into talks … we enter from a strong position.”

He said the attack was a response to raids by U.S. and Afghan forces on civilians in other parts of the country. While he acknowledged there should be less harm to civilians, he said they shouldn’t be living near such an important foreign compound. 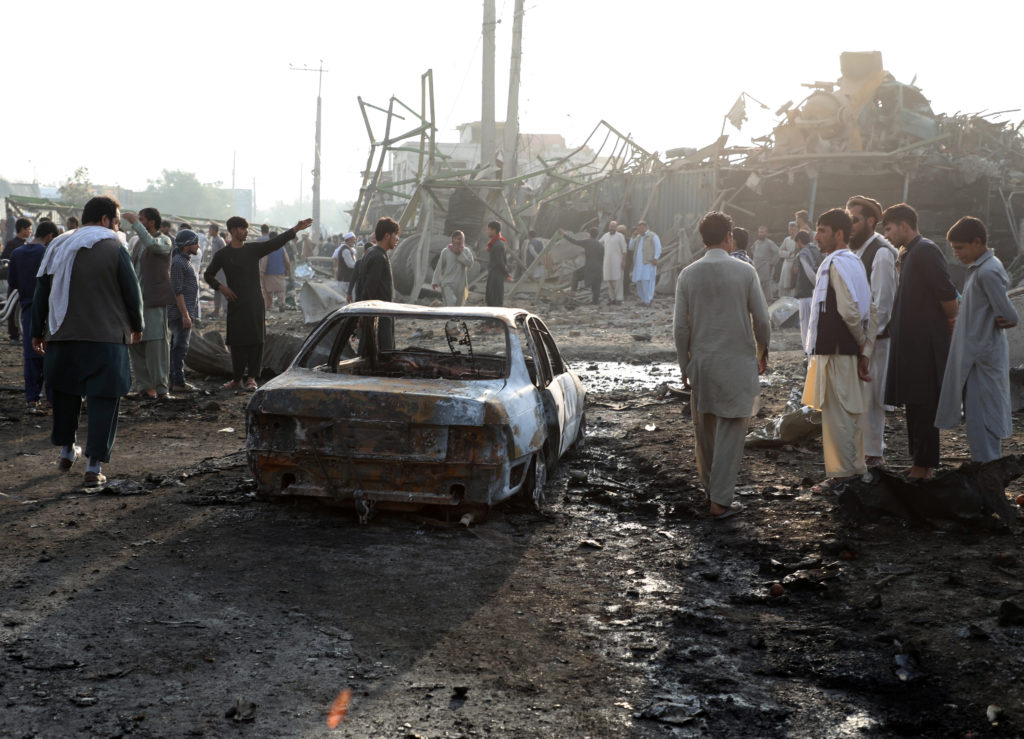 Afghan residents inspect the site of a blast in Kabul, Afghanistan, September 3, 2019. Photo by Omar Sobhani/Reuters

The attack occurred just hours after the U.S. envoy briefed the Afghan government on an agreement “in principle” with the Taliban that would see 5,000 U.S. troops withdraw from five bases in the country within 135 days of a final deal. Between 14,000 and 13,000 troops are currently in the country.

The Green Village also was hit by a suicide car bomber in January, again as the U.S. envoy, Zalmay Khalilzad, was visiting the capital to brief the Afghan government on his negotiations with the Taliban on ending nearly 18 years of fighting.

Hours before Monday’s attack, Khalilzad showed a draft deal to the Afghan president after declaring that they are “at the threshold of an agreement” following the end of the ninth round of U.S.-Taliban talks in Qatar. The agreement still needs Trump’s approval.

There was no immediate comment from Khalilzad after the blast that was strongly condemned by Afghan President Ashraf Ghani.

Shaken Kabul residents questioned whether the Taliban will respect any agreement, especially after foreign troops withdraw from the country.

“This what the Taliban are up to in Afghanistan; totally committed to total destruction. Can they be trusted!!??” presidential spokesman Sediq Seddiqi tweeted.

The Taliban carry out such attacks even as the militant group appears to be getting what it wants in a deal with the U.S. — a troop withdrawal. The group wants all of the some 20,000 U.S. and NATO troops out of Afghanistan immediately, while the U.S. seeks a withdrawal in phases that would depend on the Taliban meeting certain conditions such as a reduction in violence.

Attacks have surged in recent months, including Taliban assaults on two provincial capitals over the weekend, as the group seeks to strengthen its negotiating position not only with the U.S. but with the Afghan government in the even more challenging intra-Afghan talks that are meant to follow a U.S.-Taliban deal on Afghanistan’s future. The Taliban have rejected talking with the government so far, dismissing it as a U.S. puppet.

Some analysts also have warned that some factions of the Taliban might be expressing displeasure with the U.S. deal, though Taliban political leaders at the talks in Qatar have insisted that their tens of thousands of fighters would respect whatever agreement is reached.

The militant group is at its strongest since the U.S.-led invasion to topple its government after the Sept. 11, 2001 attacks on the U.S. The Taliban now control or hold sway over roughly half of Afghanistan.

The United Nations and others say civilians are suffering, often caught in the cross-fire as government forces, backed by the U.S., pursue the militants with airstrikes and raids. Afghanistan was the world’s deadliest conflict in 2018.

The Taliban spokesman, Mujahid, said that whenever there is a reduction of violence in Afghan cities, the government asserts that the militant group is no longer able to carry out attacks because of stronger Afghan security forces.

“They should realize that they can’t stop the Taliban,” Mujahid said. “Hopefully they must understand that by now.”

Left: Afghan security forces keep watch at the site of a blast in Kabul, Afghanistan, September 3, 2019. Photo by Omar Sobhani/Reuters