EDIRNE, Turkey — A group of migrants on Saturday tried to bring down a fence in a desperate attempt to bust through the border into Greece while others hurled rocks at Greek police. Greek authorities responded, firing volleys of tear gas at the youths.

At least two migrants were injured in the latest clash between Greek police and migrants gathered on the Turkish side of a border crossing near the Greek village of Kastanies. As in previous confrontations this week, officers in Greece fired tear gas to impede the crowd and Turkish police fired tear gas back at their Greek counterparts.

Groups of mostly young men tied ropes onto the fence in an attempt to tear it down. Some shouted “Allah is Great” while others shouted “open the border.”

It was not immediately clear what caused the two migrants’ injuries. A Greek government official said the tear gas and water cannons were used for “deterrence” purposes.

Thousands of migrants headed for Turkey’s land border with Greece after President Recep Tayyip Erdogan’s government said last week that it would no longer prevent migrants and refugees from crossing over to European Union territory. Greece deployed riot police and border guards to repel people trying to enter the country from the sea or by land. 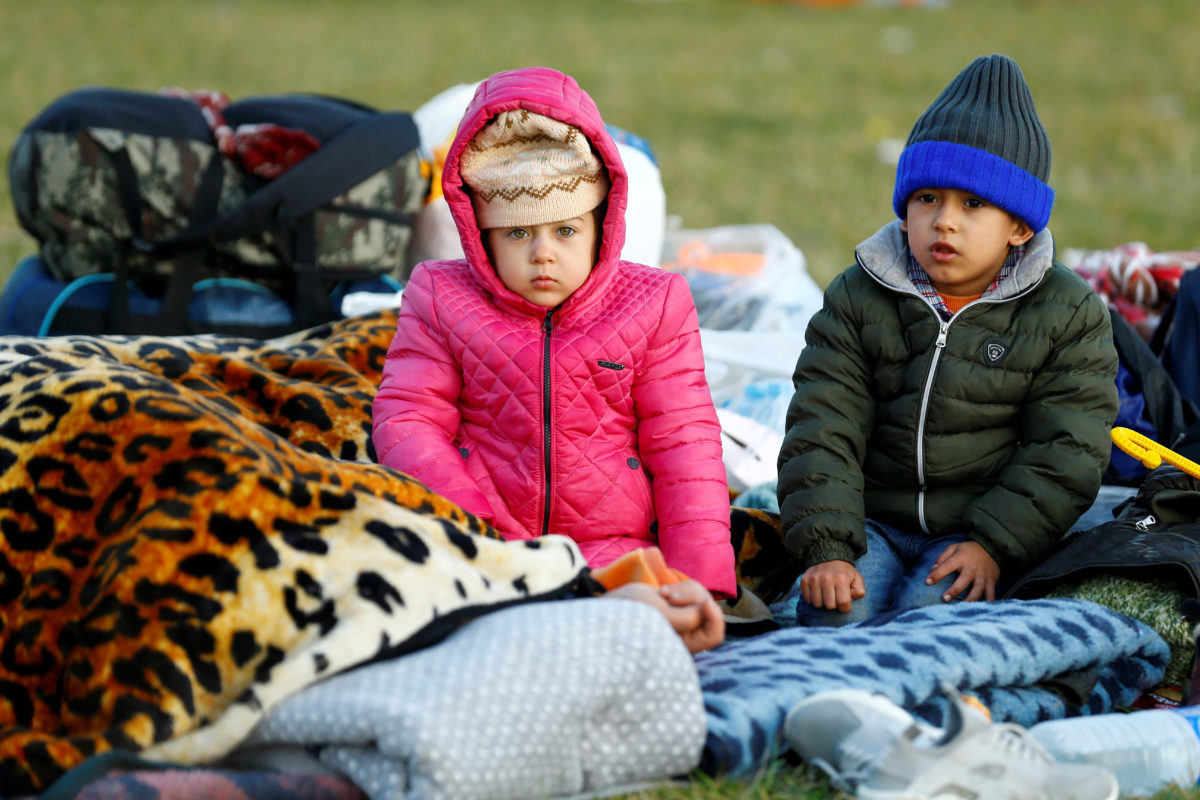 Erdogan plans to be in Brussels on Monday for a one-day working visit. A statement from his office did not specify where he would be during his visit or the reason why he’s heading to the EU’s headquarters.

The announcement came hours after EU foreign ministers meeting in Croatia on Friday criticized Turkey, saying it was using the migrants’ desperation “for political purposes.”

In a statement Saturday, the Greek government said that around 600 people, aided by Turkish army and military police, threw tear gas at the Greek side of the border overnight. It also said there were several attempts to breach the border fence, and fires were lit in an attempt to damage the barrier.

“Attempts at illegal entry into Greek territory were prevented by Greek forces, which repaired the fence and used sirens and loudspeakers,” the statement read.

Thousands of migrants have slept in makeshift camps near the border since the Turkish government said they were free to go, waiting for the opportunity to cut over to Greece.

“It is very difficult, but there is hope, God willing,” said Mahmood Mohammed, 34, who identified himself as a refugee from Syria’s embattled Idlib province.

Another man who identified himself as being from Idlib said he was camped out in western Turkey both to get away from the war at home and to make a new life for his family in Europe or Canada after crossing through the border gate.

Erdogan announced last week that Turkey, which already houses more than 3.5 million Syrian refugees, would no longer be Europe’s gatekeeper and declared that its previously guarded borders with Europe are now open.

The move alarmed EU countries, which are still dealing with the political fallout from a wave of mass migration five years ago. Erdogan has demanded that Europe shoulder more of the burden of caring for refugees. But the EU insists it is abiding by a 2016 deal in which it gave Turkey billions in refugee aid in return for keeping Europe-bound asylum-seekers in Turkey.

In a phone call with German Chancellor Angela Merkel on Friday, Erdogan said the Turkey-EU migration deal is no longer working and needs to be revised, according to the Turkish leaders’s office. 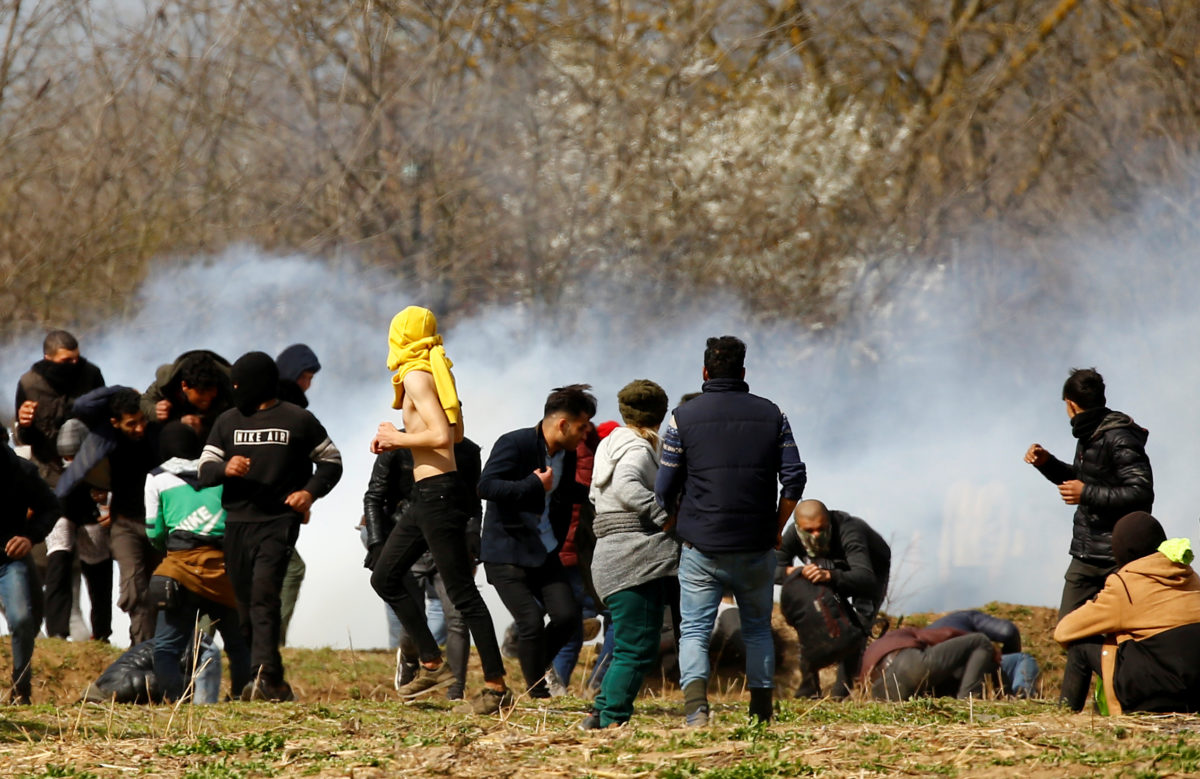 Migrants run away from tear gas as they gather on the Turkish-Greek border near Turkey’s Pazarkule border crossing with Greece’s Kastanies, in Edirne, Turkey March 7, 2020. Photo by Huseyin Aldemir/Reuters.

While crediting Turkey for hosting millions of migrants and refugees, European foreign ministers said the bloc “strongly rejects Turkey’s use of migratory pressure for political purposes.” They called the situation at the border unacceptable and said the EU was determined to protect its external boundaries.

In Berlin on Saturday, about 1,000 people rallied in front of the Interior Ministry urging Germany to take in asylum seekers stuck at the Greek border. They then marched through the streets downtown behind a banner reading “Europe, don’t kill. Open the borders, we have space.”

From a slow-moving truck, one of the leaders led a chant in English: “No borders, no nations. Stop deportations.”

Greek authorities said they thwarted more than 38,000 attempted border crossings in the past week and arrested 268 people — only 4% of them Syrians. They reported reported 27 more arrests Saturday, mostly migrants from Afghanistan and Pakistan.

Greece has described the situation as a threat to its national security and has suspended asylum applications for a month, saying it will deport new arrivals without registering them. Many migrants have reported crossing into Greece, being beaten by Greek authorities and summarily forced back into Turkey.

“I didn’t go to the river,” said Mohammed, the refugee from Idlib. “When the Greece police capture you, they tell you to take off all your clothes and have only the underwear, and then they order you to go to the other side.”

Turkish authorities say one migrant was killed earlier this week by bullets fired by Greek police or border guards near the border crossing. Greece denies the accusation. A child also drowned off the island of Lesbos when a boat carrying 48 migrants capsized.

“Their masks have fallen,” he said. “The ruthlessness of those who gave lectures on humanity has become evident.”

Soylu claimed that some 1,000 Turkish special operations police deployed on the border had started to thwart the actions of the law enforcement teams assembled by Greece to drive the migrants back.

The minister also predicted that Greece would not be able to “hold on to its borders” when the river that delineates most of the Turkey-Greece border gets shallower and easier to cross.

Soylu has said Erdogan instructed Turkish authorities to prevent migrants from attempting to reach the Greek islands in dinghies to avoid “human tragedies.” Hundreds have drowned attempting the comparatively short but dangerous voyage from Turkey’s coast.