GAZA CITY, Gaza Strip — Tens of thousands of Palestinians on Saturday rallied at points near the Israeli border to mark the first anniversary of weekly protests in the Gaza Strip, as Israeli troops shot tear gas and opened fire at small crowds of activists who approached the perimeter fence. At least one Palestinian was killed and 46 protesters were wounded by live fire, according to Palestinian medical officials.

Gaza’s Hamas rulers had pledged to keep the crowds a safe distance from the fence as Egyptian mediators tried to cement a cease-fire agreement that Hamas hopes will ease a crippling Israeli-Egyptian blockade of the crowded territory. Dozens of volunteers in fluorescent vests were deployed to restrain demonstrators, and cool rainy weather also appeared to affect enthusiasm.

But as the crowds swelled throughout the afternoon in response to Hamas’ calls for a large turnout, dozens of protesters approached the fence, unfurling Palestinian flags and throwing rocks and explosives toward Israeli soldiers positioned nearby. The Israeli forces responded with tear gas and live fire to disperse the crowds.

Gaza’s Health Ministry said that a 17-year-old protester died immediately after being shot in the face in east Gaza City. 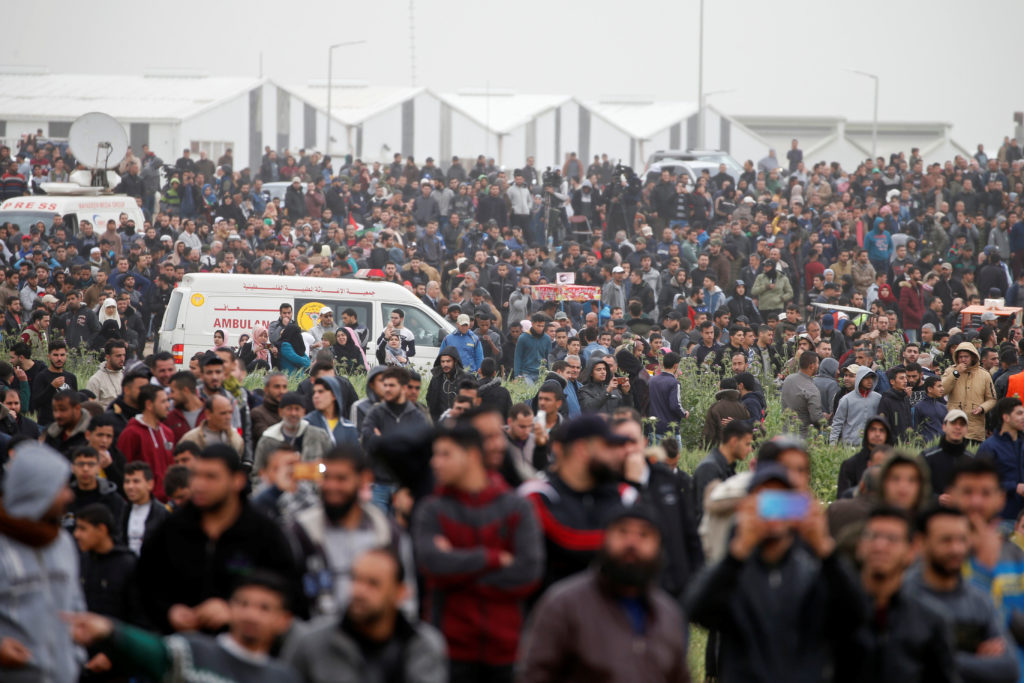 Palestinians gather during a protest marking Land Day and the first anniversary of a surge of border protests, at the Israel-Gaza border fence east of Gaza City March 30, 2019. Photo By Mohammed Salem/Reuters

Saturday’s protest came at a sensitive time for both Israel and Hamas.

Israeli Prime Minister Benjamin Netanyahu is seeking his fourth consecutive term in April 9 elections, but is facing a serious challenge from a group of ex-army chiefs who have criticized what they say is his failed Gaza policy.

Israel has fought two wars and numerous smaller conflagrations with Hamas on Netanyahu’s watch. Yet the group remains firmly in control, and with a lack of alternatives, Netanyahu has been forced at times to rely on Hamas to maintain stability along Israel’s volatile southern front.

In the final stretch of the campaign, Netanyahu needs to keep the Israel-Gaza frontier quiet, without seeming to make concessions to Hamas. Netanyahu took heavy criticism this week for what was seen as a soft response to renewed rocket fire out of Gaza.

Hamas, meanwhile, faces growing unrest in Gaza as a result of worsening conditions after more than a decade of Israeli and Egyptian border closures. Earlier this month, the group violently suppressed several days of public protests, staged under the slogan “We want to live,” over the dire conditions.

Speaking on the group’s Al-Aqsa TV station, Hamas’ top leader in Gaza, Yehya Sinwar, praised the protesters. “With this big turnout, our people say, ‘We want to live!”

His use of the protesters’ slogan appeared to be aimed at diverting the recent criticism of his group. Hamas blames the blockade and punitive measures by its West Bank-based rival, the Palestinian Authority, for worsening the living conditions.

As the protest was winding down, organizers vowed to continue the marches and said they would gather again as usual next Friday.

The fence protests, which began exactly a year ago, have been aimed in large part at breaking the Israeli-Egyptian blockade on Gaza, but haven’t delivered major improvements.

Fouad Aishan, 40, came with his five children to the frontier. He said he planned to show his children the Israeli soldiers and return to safety before the protest started.

“I come here driven by personal national motivation,” he said. “It has nothing to do with what the politicians do.”

The Israeli military estimated 40,000 Palestinians were gathered at the marches.

“The rioters are hurling rocks and setting tires on fire. In addition, a number of grenades and explosive devices have been hurled at the Gaza Strip security fence,” it said in a statement.

The military released video footage showing large crowds of protesters gathered near the fence and hurling objects. In one scene, a group of activists went up to the fence and hurled stones at the other side. In another scene, a youth could be seen trying to pull apart barbed wire along the fence. 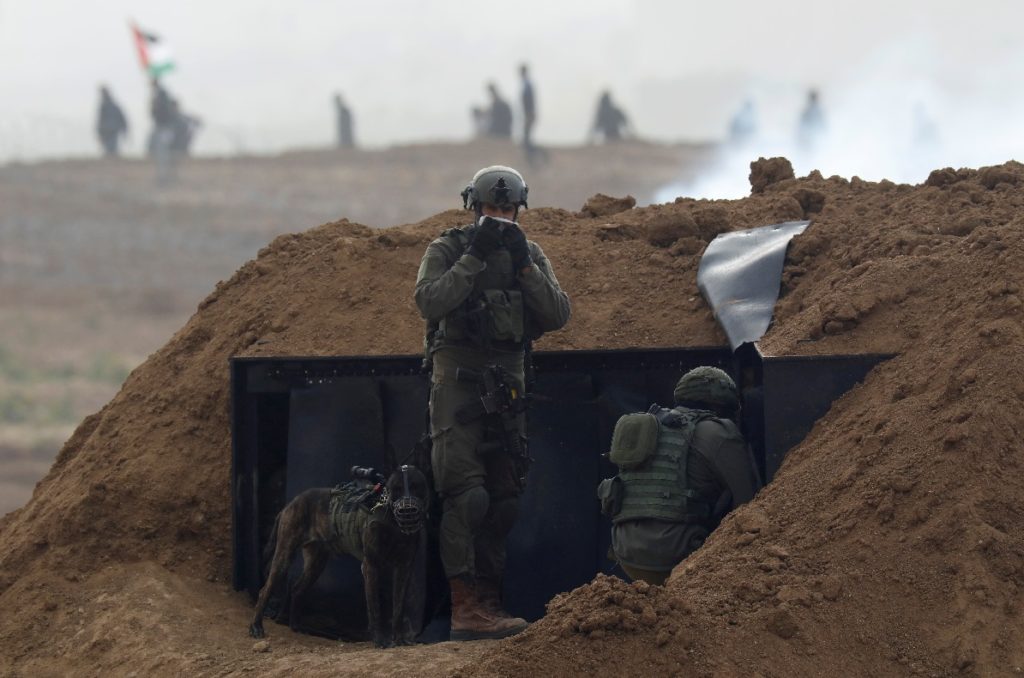 Israeli soldiers wait in position near the border fence between Israel and the Gaza Strip, during a protest on Gaza side, as seen from the Israeli side March 30, 2019 Photo By Amir Cohen/Reuters

The army said about 200 Palestinians “rioted during the night along the fence” and that the army used riot dispersal means against them.

A Gaza hospital worker, speaking on condition of anonymity because he was not authorized to brief the media, said the young man was a member of a group that burns tires, flashes laser lights and detonates explosives near the fence at night to distract soldiers and disturb residents of nearby Israeli communities.

The marches near the fence began a year ago, initially organized by grassroots activists who were calling for a mass return to ancestral homes in what is now Israel.

Hamas quickly took the lead in the protests, using the gatherings to call for an easing of the blockade. The closure , imposed after Hamas seized Gaza in 2007, has devastated Gaza’s economy.

The border marches routinely ended in confrontations, with some of the Palestinian demonstrators burning tires, hurling fire bombs or setting off explosives and Israeli troops firing live rounds and tear gas.

According to a Gaza rights group and a count by The Associated Press, 196 Palestinians were killed in the demonstrations over the past year, including 41 minors, and thousands were wounded by live fire. An Israeli soldier was also killed in the context of the marches.

Egypt has repeatedly tried to broker a cease-fire between Israel and Hamas, stepping up efforts in recent days after a Gaza rocket struck a house in central Israel earlier this week, injuring seven Israelis and threatening renewed escalation.

Palestinians with knowledge of the talks have said that as part of the proposed deal, Gaza protesters were to keep away from the fence Saturday and Israeli troops were to show restraint.

Under the Egyptian plan, Israel was to offer economic incentives for Gaza in exchange for calm, according to Palestinian officials.

Khalil al-Hayya, a senior Hamas official, said the group had received “positive signs” from the Egyptians. He added that the Egyptian team was to return to Israel on Sunday to continue the talks. “We will continue our marches until all our goals are achieved,” he said.

Left: A Palestinian demonstrator reacts as others take cover from Israeli gunfire and tear gas during a protest marking Land Day and the first anniversary of a surge of border protests, at the Israel-Gaza border fence east of Gaza City March 30, 2019. Photo By Mohammed Salem/Reuters