Thai soldier kills at least 20 people, holes up in mall

NAKHON RATCHASIMA, Thailand — An airport-themed mall filled with colorful Lego sculptures, a merry-go-round and huge replicas of landmarks from around the world became a shooting gallery Saturday as a Thai soldier opened fire during the mid-afternoon rush. Officials say at least 20 were killed and 31 injured.

Defense Ministry spokesman Lt. Gen. Kongcheep Tantrawanich said Sgt. Jakrapanth Thomma was behind the attack at the Terminal 21 Korat mall in Nakhon Ratchasima, a hub for Thailand’s relatively poorer and rural northeastern region. A police officer said he was angry over a land dispute.

Shortly before midnight, police announced they had secured the entire mall, but were still searching for the shooter. Public Health Minister Anutin Charnvirakul said there were no more bodies left inside, but added, “we don’t know whether there are any additional injuries or deaths or not.”

Police said the gunman was still inside. Gunfire could be head coming from the mall shortly before 3 a.m. as ambulances were brought closer to the scene, but reporters were kept away and no announcements were immediately forthcoming.

It was the country’s second mass shooting in about a month. 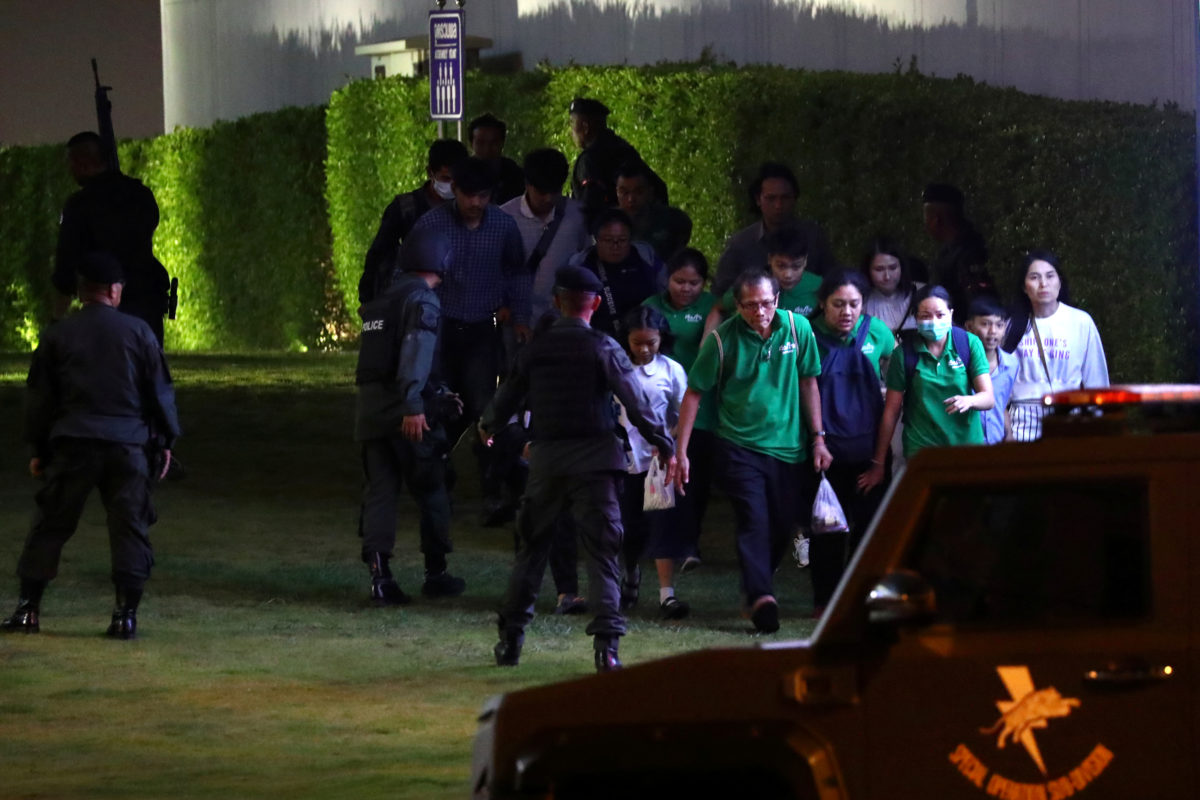 Thailand security forces evacuated people from a shopping mall as they chase a shooter hidden in after a mass shooting in front of the Terminal 21, in Nakhon Ratchasima, Thailand February 9, 2020. Photo by Athit Perawongmetha/Reuters.

City and neighborhood police officers, who asked not to be identified because they were not authorized to release information, said the man took one or more guns from his base and drove to the Terminal 21 Korat mall, shooting as he went. Thai Rath television, which aired security camera footage showing a man with what appeared to be an assault rifle, said the incident began at about 3:30 p.m.

Video taken outside the mall showed people diving for cover as shots rang out. Nattaya Nganiem and her family had just finished eating and were driving away when she heard gunfire.

“First I saw a woman run out from the mall hysterically,” said Nattaya, who shot video of the scene on her phone. “Then a motorcycle rider in front of her just ran and left his motorcycle there.”

Anutin said that a doctor was shot while helping an injured person.

A police officer contacted by phone in the city of Nakhon Ratchasima said the soldier initially killed another soldier and a woman, and wounded a third person, apparently over a land dispute. Nakhon Ratchasima is also known as Korat.

Defense Ministry spokesman Kongcheep told Thai media that the first person killed was the commanding officer of the 22nd Ammunition Battalion, in which the shooting suspect also served. He said the gunman had fired at others at his base and took guns and ammunition before fleeing in an army Humvee that he drove to the mall.

The man believed to be the gunman appears to have posted updates to his Facebook page during the rampage.

“No one can escape death,” read one post. Another asked, “Should I give up?” In a later post, he wrote, “I have stopped already.”

Jakrapanth’s profile picture shows him in a mask and dressed in military-style fatigues and armed with a pistol. The background image is of a handgun and bullets.

In a photo circulated on social media that appeared to be taken from his Facebook page, the suspect can be seen wearing a green camouflaged military helmet while a fireball and black smoke rage behind him. The Facebook page was made inaccessible after the shooting began.

The gunman could scarcely have chosen a more target-rich environment in which to vent his rage.

The multi-level glass and steel mall is designed to resemble an airport terminal, complete with a mock control tower and departure gates. A large model passenger jet dangles from wires beside one of the main escalators.

Each of its seven retail floors is decorated to represent a different country. A giant replica of Paris’ Eiffel Tower soars to the ceiling, while a model of London’s Big Ben dominates another area, and a massive model of California’s Golden Gate Bridge spans an open courtyard. A two-story golden Oscar statue towers over a food court.

Hundreds of people were evacuated from the mall in small batches by police even as the gunman was being sought.

Nakhon Ratchasima is about 250 kilometers (155 miles) northeast of the Thai capital, Bangkok.

Many malls in Thailand, including Terminal 21’s namesake in Bangkok, have metal detectors and security cameras at entrances manned by uniformed but unarmed security guards. Checks on those entering are often cursory at best.

Nattaya, whose dining family left just before shooting broke out, did not know the full extent of the carnage until she arrived home. When she learned of the death toll, she fainted.

“I can’t believe this is happening in my hometown,” she said. “I mean, this shopping mall, we go there almost every other day.

Gun violence is not unheard of in Thailand. Firearms can be obtained legally, and many Thais own guns. Mass shootings are rare, though there are occasional gun battles in the far south of the country, where authorities have for years battled a long-running separatist insurgency.

The incident in Korat comes just a month after another high-profile mall shooting, in the central Thai city of Lopburi. In that case, a masked gunman carrying a handgun with a silencer killed three people, including a 2-year-old boy, and wounded four others as he robbed a jewelry store. A suspect, a school director, was arrested less than two weeks later and reportedly confessed, saying he did not mean to shoot anyone.

Left: Thailand security forces take cover behind an ambulance as they chase a shooter hidden in a shopping mall after a mass shooting in front of the Terminal 21, in Nakhon Ratchasima, Thailand February 9, 2020. Photo by Athit Perawongmetha/Reuters.