Thailand at the brink 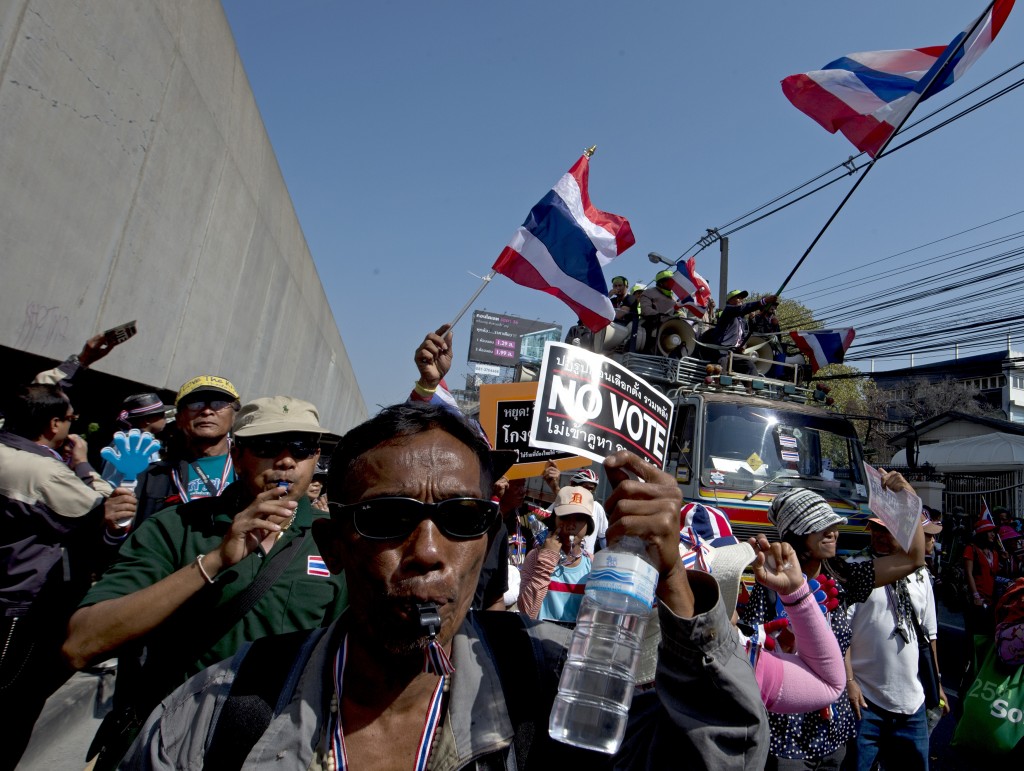 When I was in Thailand a year ago, the streets and glitzy shopping malls were crammed with tourists, including tens of thousands of Chinese escaping their country’s crowds and pollution for a more exotic Asian New Year holiday. The country’s economy was growing at a 6 percent clip. And its neophyte Prime Minister Yingluck Shinawatra was receiving good marks from diplomats and local analysts for deftly balancing Bangkok’s power centers and lowering the temperature from a decade of political tensions.

What a difference a year makes.

Parliamentary elections are scheduled for Sunday, and no one can predict with assurance if polling stations will be open or whether voters will show up amid fears of violence. Behind the turmoil is the bigger question: Has this Southeast Asian nation’s sometimes halting, five-decade experiment in democracy now gone completely off the rails, to be replaced by chaos, rolling referendums of massive street demonstrations and at worst civil war?

And while this beautiful nation and people certainly are unique, political scientists see a similar thread running through Bangkok, Kiev and Cairo: new classes gaining a political voice and coming into the system, sometimes captured or manipulated by charismatic leaders and challenging old ruling elites in a potent brew of civic confrontation and conflict.

That these questions are being asked throughout Thailand and among the cadre of sympathetic Washington wonks who follow Thai affairs shows how deeply the political rifts have become in the country of 70 million and once the key regional ally of the United States. On one side are the supporters of former and now self-exiled Prime Minister Thaksin Shinawatra (he has not returned to Thailand since being convicted for violating conflict of interest rules in the purchase of land in Bangkok) and his sister Yingluck, the current leader, who have won three elections since 2001, and on the other are the Thaksin opponents who have ousted two Thaksin governments by military or political coups.

The latest unraveling began late last year when Yingluck thought she had a big enough parliamentary majority to push through a bill granting amnesty to her brother, now living in Dubai, from the corruption charges and to a former prime minister from the Democratic party for the deaths of pro-Thaksin demonstrators in 2010. The bill failed and the streets have been full since with anti-Thaksin crowds sometimes numbering in the hundreds of thousands. Yingluck dissolved parliament and called for new elections. The opposition Democrats responded with an election boycott and then escalated their demands that parliament be replaced by an appointed council.

Now, as Southeast Asia analyst Ernest Bower put it, Thailand “is still in the center of a hurricane.”

At a recent Center for Strategic and International Studies conference, Bower said he was reluctant to predict that a civil war would result from the stand-off but also refused to rule it out, especially if the military splits. So far, military leaders have issued cautious statements, indicating they do not want to institute a coup and calling for calm.

Sunday will be another test of whether such calm is possible Early voting last Sunday produced nearly as many anti-government demonstrators as voters, which led an official at Human Rights Watch Thailand to denounce “thuggery.” And even if the vote goes smoothly, the election will not produce a quorum for a new parliament since dozens of districts have no candidates on the ballot.

In recent meetings around Washington, mostly off the record, one new trend has become increasingly clear: The ability of U.S. officials to work hand-in-glove with the royal palace and Thai elite that governed the country is about reaching its end. King Bhumibol Adulyadej is 86, hospitalized and has not even issued a written statement on the current tangle. American experts throw up their hands in despair when asked if they can find any way out of the deepening stalemate. Increasingly, the Thai elite are growing upset with the U.S., particularly recent statements saying the Sunday elections should go ahead without violence or intimidation.

That divide was evident in the visit of two Thai senators to congressional and think tank offices late this week. Sens. Bilaibhan Sampatisiri and Pikulkeaw Krairiksh said their main objective was to change the narrative of a Bangkok elite challenging the legitimacy of a government elected with overwhelming support from the rural and poorer northern provinces which are now receiving generous subsidies for their rice (other farmers have stopped receiving subsidies from the overstretched government in October and have joined the protest movement) and much improved health care. They insisted the streets are full of people from all classes fed up with Thaksin family corruption (40 percent rake-offs instead of the 5-10 percent that characterized traditional Thai corruption) and authoritarian tendencies. The senators said they made some headway on Capitol Hill, but at think tanks they were strongly challenged by local analysts including one who said “the problem is that power is going from people like yourselves to people not like yourselves” and warned their arguments would fall on deaf ears in the United States.

What that American said privately was put on the record by French political scientist David Camroux in an article widely circulated and seconded among Washington Asia hands:

“Above all, what is occurring in Thailand is not so much a ‘crisis,’ to use that much-abused term, but something far more serious — a profound malaise within Thailand as a whole that has been brewing for over a decade … the longstanding competition for power among elites is eclipsed by social cleavages, economic uncertainty and an almost existential angst linked to a ‘fin de regne,'” (the death of a monarch who has ruled since 1946 and whose crown prince son is as widely divisive as the king is revered).

Despite such a gloomy analysis, some in Washington keep looking for silver linings. The tourists will come back when things quiet down, said one analyst, because of the country’s great allure for foreigners. Even as the economic growth rate has been halved and new foreign investment is on hold, it is unlikely that the Japanese and other foreign companies will shut down their large factories short of full-scale civil war. The country has a way of bouncing from crisis to recovery; the difference this time is that no one can predict how.

Michael D. Mosettig, PBS NewsHour foreign affairs and defense editor emeritus, watches wonks push policy in Washington’s multitude of think tanks. From time to time, he writes dispatches on what those scholars and wannabe secretaries of state have in mind for Europe, Asia and Latin America.

Editor’s Note: This column has been updated to include information about former Prime Minister Thaksin Shinawatra’s corruption conviction and the fact that some Thai farmers have been cut off from rice subsidies since October.