These robots will help fans during the 2020 Tokyo Olympics

TOKYO — Tokyo’s Olympics may become known as the “Robot Games.”

Organizers on Friday showed off robots that will be used at the new National Stadium to provide assistance for fans using wheelchairs.

Tokyo Olympic official Masaaki Komiya pointed out that Japan is known for its robot technology, and the 2020 Summer Games are a good place to show off.

“Robots should not overwhelm people,” Komiya, the vice director general to the Tokyo Olympics, told a news conference. “Robots are something that have an amicable relationship with human beings and can work together. That’s the kind of robots we envision.”

The robots are made by major Olympic sponsor Toyota Motor Corp. Toyota officials said 16 of the so-called “human support robots” will be used at the National Stadium with five other “delivery support robots” also being available.

Not to be outdone, Panasonic Corp.— also a major Olympic sponsor — showed off its “power assist suit.” When worn, the suit offers support to the back and hip area and allows for heavy objects to be lifted with less effort. Panasonic said 20 of the suits will be used at the Olympics and could help guests with their luggage and with other lifting chores.

“Through this occasion, people in the world will be able to realize how advanced Japan is in terms of robot technology,” Hideyo Hirata, director of technology services for the Tokyo Olympics, told reporters. 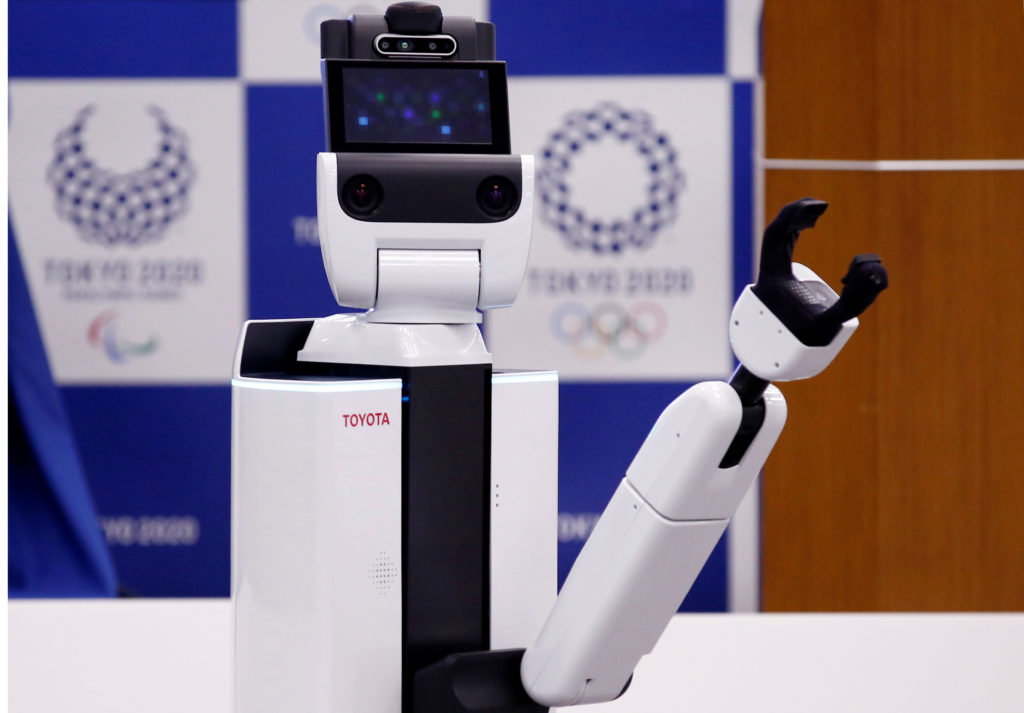 Toyota’s HSR is pictured at a demonstration of Tokyo 2020 Robot Project for Tokyo 2020 Olympic Games. Photo by Kim Kyung-hoon/Reuters

Minoru Yamauchi of Toyota, the general manager for 2020 Robot Development, said the automaker is branching out and becoming a “mobility company.”

“We have been looking at how we can support the daily lives of people, and how we can develop robots that can partner with daily life,” Yamauchi said. “In the Tokyo Olympics, there will be many guests in wheelchairs and we would like them enjoy the games without worrying about their mobility.”

Yoshifumi Uchida, general manager of Panasonic’s Paralympic department, said its power assist suit technology was developed partly because of Japan’s aging population. This could help get more women and the elderly into the working population.

“We would like to have a society where people can work without caring about gender differences or age differences,” Uchida said. “When you are carrying a suitcase or a heavy box, this is where the power assist suit becomes valuable.”

He said the suits would also be used away from the venues in “related facilities and airports.”

He said the suit improved “efficiency” by about 20 percent, allowing the wearer to lift more, and for a longer time.

Battery life if about four hours, and the suit gives the wearer the ability to lift about 10 kilograms (22 pounds) more with the same energy expended.

Left: Toyota's Human Support Robot delivers a basket to a woman in a wheelchair at a demonstration of Tokyo 2020 Robot Project for Tokyo 2020 Olympic Games. Photo b y Kim Kyung-hoon/Reuters