CHENGANNUR, India — Some 800,000 people have been displaced and over 350 have died in the worst flooding in a century in southern India’s Kerala state, officials said Sunday, as rescuers searched for people stranded in the worst-affected areas.

The downpours that started Aug. 8 have triggered floods and landslides and caused homes and bridges to collapse across Kerala, a picturesque state known for its quiet tropical backwaters and beautiful beaches.

Thousands of rescuers were continuing efforts to reach out to stranded people and get relief supplies to isolated areas by hundreds of boats and nearly two dozen helicopters, said P.H. Kurian, a top disaster management official in Kerala. He said weather conditions had improved considerably and expected the nearly 10,000 people still stranded to be rescued by Monday.

An estimated 800,000 people have taken shelter in some 4,000 relief camps across Kerala, Kurian said. 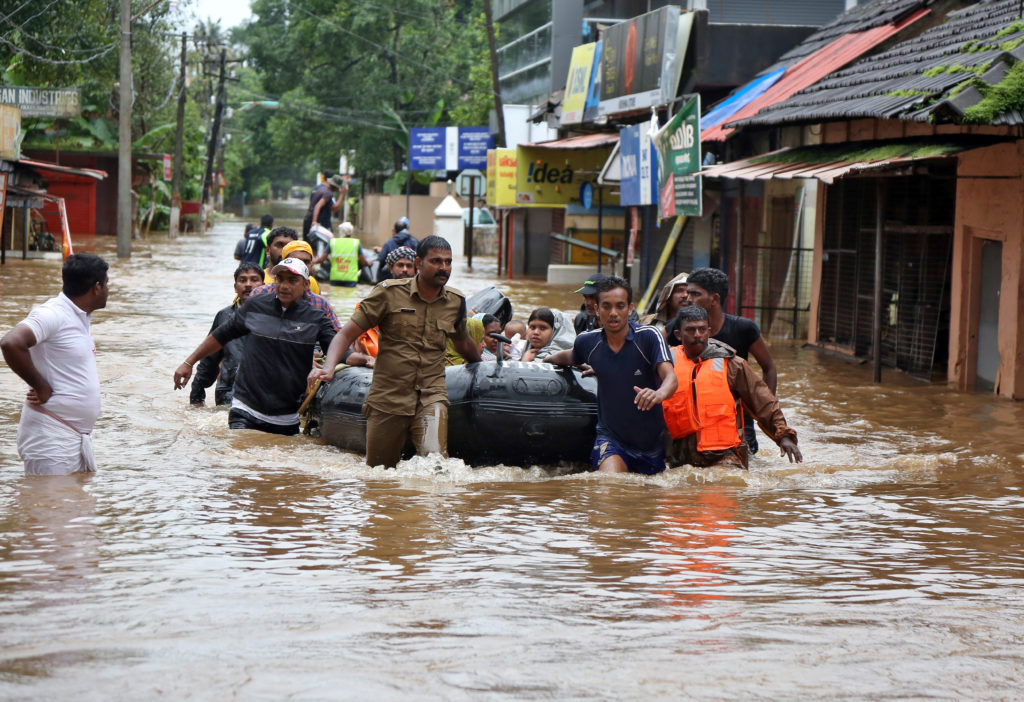 Rescuers evacuate people from a flooded area to a safer place in Aluva in the southern state of Kerala, India, August 18, 2018. Photo by Sivaram V/Reuters

Weather officials have predicted more rains across the state through Monday morning.

In several villages in the suburbs of Chengannur, one of the worst-affected areas, carcasses of dead cattle were seen floating in muddy waters as water began receding. However, vast rice fields continued to be marooned and many vehicles were submerged.

In some villages, floodwaters up to 3 meters (10 feet) high had entered homes. 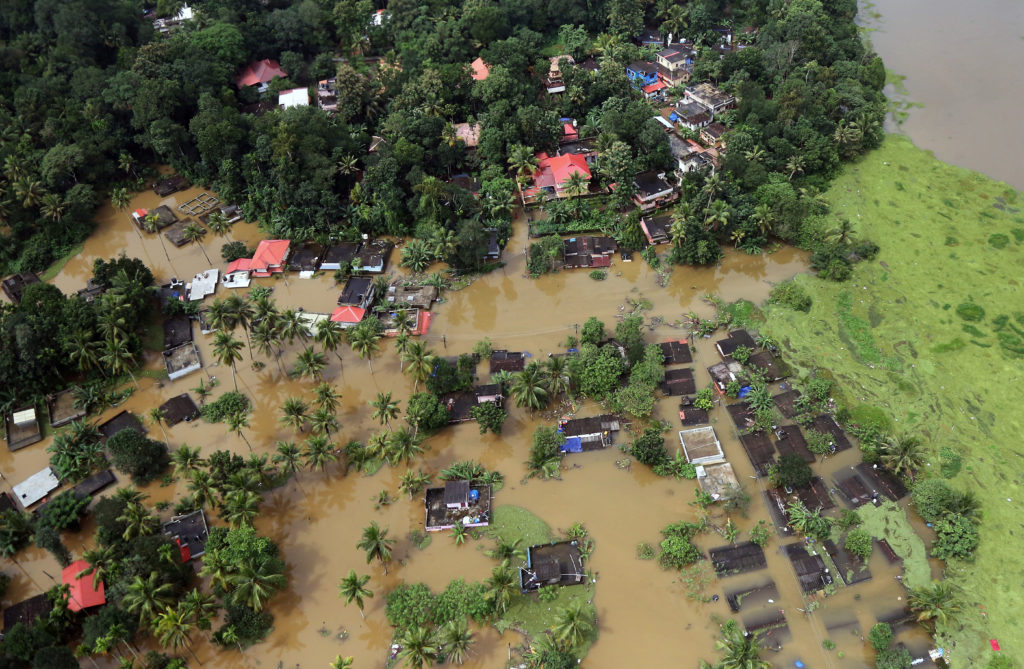 An aerial view shows partially submerged houses at a flooded area in the southern state of Kerala, India, August 17, 2018. Photo by Sivaram V/Reuters

Rescuers in a motorboat reached a hamlet where they tried in vain to persuade an 80-year-old woman, Bhavani Yamma, to be taken to a government-run shelter from her partially submerged single-story house.

“I will not come. This is my home and I will die here,” said Yamma, who lives alone.

One of the rescuers, Rajagopal, a police constable who uses only one name, said initially “we didn’t anticipate it would be such a big disaster.” But he said that by Wednesday, “we realized it’s really big.”

Officials have called it the worst flooding in Kerala in a century, with rainfall in some areas well over double that of a typical monsoon season.

At least two trains carrying about 1.5 million liters (400,000 gallons) of water moved to the flooded areas from the neighboring states of Madhya Pradesh and Maharashtra on Sunday, Indian railway official Milind Deouskar said, according to the Press Trust of India news agency.

After one of the trains arrived, Kurian, the disaster management official, said authorities had largely restored the state’s water supply systems. “What we need right now is bottled water, which is easy to transport to remote and isolated places, where some people are still stranded,” Kurian said.

Officials estimate that more than 10,000 kilometers (6,200 miles) of roads have been damaged. One of the state’s major airports, in the city of Kochi, was closed this past Tuesday due to the flooding. It is scheduled to remain closed until Aug. 26.

The Indian government said a naval air base in Kochi would be opened for commercial flights starting Monday morning.

Prime Minister Narendra Modi inspected the flooded landscape from a helicopter on Saturday and met with the state’s top officials, promising more than $70 million in aid. While the central government has dispatched multiple military units to Kerala, state officials are pleading for additional help.

In Kerala, I took stock of the situation arising in the wake of the devastating floods across the state.

Joined a review meeting and undertook an aerial survey to assess the damage caused by flooding.

The nation stands firmly with Kerala in this hour. pic.twitter.com/PFeWTTZAwl

Increasing funds allocated for Kerala relief to Rs.500 Cr is a good step but nowhere near enough. It is critical you declare the floods as a National Disaster. Please do not vacillate as the people of Kerala are suffering. #KeralaFloodRelief https://t.co/AxabEOHftR

In Vatican City on Sunday, Pope Francis held a moment of silence during his noontime blessing to pray for Kerala flood victims.

“I am close to the church in Kerala, which is on the front lines in providing aid to the people,” Francis said. He called for solidarity and “the concrete assistance of the international community.”

Kerala has a sizeable and ancient Christian community. Francis had hoped to visit India last year when he visited Bangladesh, but preparations fell apart in New Delhi and the Vatican added Myanmar to his trip instead.

Left: Rescuers evacuate people from a flooded area to a safer place in Aluva in the southern state of Kerala, India, August 18, 2018. Photo By Sivaram V/Reuters