LONDON (AP) — Thousands of people demonstrated in London on Wednesday against police violence and racial injustice following the killing of George Floyd in Minneapolis, which has set off days of unrest in the United States.

In Athens, police fired tear gas to disperse youths who threw firebombs and stones at them outside the U.S. Embassy toward the end of an otherwise peaceful protest by about 4,000 people. No injuries or arrests were reported.

The London demonstration began in Hyde Park, with protesters chanting “Black lives matter,” before many of them later marched through the streets, blocking traffic.

Some of them converged on Parliament and the nearby Downing Street office of Prime Minister Boris Johnson. A few scuffles erupted outside the street’s heavy metal gates as hundreds of protesters shouted abuse in front of a cordon of dozens of police.

READ MORE: Officers criticized for use of force at protests about police brutality

Inside, Johnson told a news conference that he was “appalled and sickened” by Floyd’s death on May 25 when a white Minneapolis officer, Derek Chauvin, pressed his knee on the handcuffed black man’s neck for several minutes.

Earlier, “Star Wars” actor John Boyega, who was born in Britain to Nigerian parents and grew up in south London’s Peckham neighborhood, pleaded tearfully for demonstrators to stay peaceful.

Boyega recalled the case of Stephen Lawrence, an 18-year-old black man from southeast London who was stabbed to death in 1993 as he waited for a bus. The case against his attackers collapsed in 1996, and a government report cited institutional racism by the London police force as a key factor in its failure to thoroughly investigate the killing. 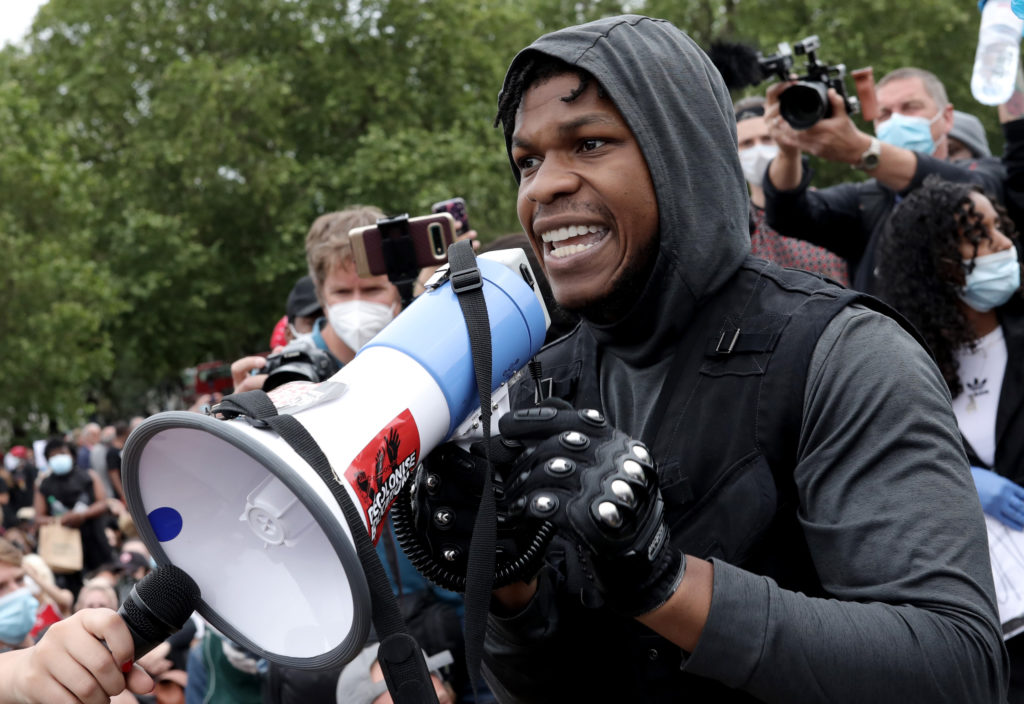 Actor John Boyega speaks to the crowd during a Black Lives Matter protest in Hyde Park on June 3, 2020 in London, United Kingdom. The death of an African-American man, George Floyd, while in the custody of Minneapolis police has sparked protests across the United States, as well as demonstrations of solidarity in many countries around the world. Photo by Dan Kitwood/Getty Images

Police appeared to keep a low profile during the demonstration and the ensuing marches.

Earlier, the U.K.’s most senior police officer said she was “appalled” by Floyd’s death and “horrified” by the subsequent violence in U.S. cities.

While the London protesters expressed solidarity with Americans protesting Floyd’s death, many also pointed to issues closer to home. “Racism is a pandemic,” said one placard at the London demonstration.

Some of them carried placards saying “Justice for Belly Mujinga,” a 47-year-old railway station worker who died of coronavirus in April, weeks after an incident in which she said she was coughed and spat upon by a customer who claimed to be infected.

Her death has come to symbolize the high toll the virus has taken on ethnic minority Britons and front-line workers — and, for some, social injustice. Police did not bring charges against the man accused of confronting Mujinga, saying an investigation had shown he did not infect her and there was no evidence to substantiate a criminal offense.

Other protests are taking place around the world, including in Cape Town, South Africa, and in Reykjavík, Iceland.

In Cape Town, about 20 people gathered at the gates of the parliament complex and held up signs with the slogans of “Black Lives Matter” and “Justice 4 George Floyd and Collins Khosa.”

Khosa is died a month ago after being confronted by soldiers and police in Johannesburg’s Alexandra township. Family members say he died hours after he was choked and beaten.

READ MORE: Rubber bullets are supposed to be ‘less than lethal,’ but they can still kill or maim

A South African army investigation cleared the soldiers of wrongdoing, but lawyers for Khosa’s family say they will challenge those findings.

In the Netherlands, police cut short a demonstration by thousands of protesters in Rotterdam because the crowd became too big for coronavirus social distancing measures.

Many of the London demonstrators appeared to ignore social distancing guidelines in the U.K., where people have been told to stay 2 meters (6 feet) apart.

The coronavirus outbreak has exposed divisions and inequalities within the U.K. A government-commissioned report Tuesday confirmed that ethnic minorities in Britain experienced a higher death rate from the coronavirus than whites, but did not provide any recommendations on how to alleviate the risks.

Figures from London’s Metropolitan Police also showed that black and ethnic minority Londoners were more likely than their white counterparts to be fined or arrested for breaking lockdown rules barring gatherings or nonessential travel.

Johnson, who has sought to cultivate close ties with U.S. President Donald Trump, was asked what he would say to him.

“My message to President Trump, to everybody in the United States from the U.K., is that … racism, racist violence has no place in our society,” he said.

Johnson said people had the right to protest but “I would urge people to protest peacefully, and in accordance with the rules on social distancing.”

Left: A man holds a banner over the window ledge of a building during a "Black Lives Matter" protest following the death of George Floyd who died in police custody in Minneapolis, London, Britain, June 3, 2020. Photo by REUTERS/Dylan Martinez

What happens when police officers see protesters as ‘the enemy’