Members of the LGBTQ community and supporters went on strike across Israel today in protest of an amendment that excludes single fathers and gay male couples from parenting via surrogacy.

Protesters gathered outside Prime Minister Benjamin Netanyahu’s house in Jerusalem, chanting and waving flags, while thousands of others marched in Tel Aviv and other major cities, briefly blocking a main freeway, Reuters reported.

The Israeli parliament, with Prime Minister Netanyahu’s support, passed an amendment last week that allows single women the “right to apply for state support for surrogacy,” according to Reuters. Until now, that right has only been extended to married, heterosexual couples. The amendment was originally supposed to include single men and gay male couples, but Netanyahu voted against that provision on Wednesday under pressure from conservative allies, enraging some in the Israeli LGBTQ community.

“The new bill passed allows single women to start a family through surrogacy, but excludes men, intentionally denying gay couples their basic human right to start a family. That’s not my country,” Hallel Silverman, a 23-year-old communications student from Jerusalem who was at the protest, told the NewsHour Weekend. “Everyone is gathering tonight to show the government that they are wrong, and we won’t let them get away with it.”

Some critics say denying people the right to parent is against the Jewish religion.

“There is a very important principle in the Torah, which is ‘to be fruitful and multiply,’” said Frank Giaoui, President of the World Congress of GLBT Jews, an organization that promotes inclusiveness for Jewish LGBTQ people. “And here [in this law], there is an opposition to this Jewish tradition, which should not be denied to LGBT people. Being a parent should be a basic human right.” 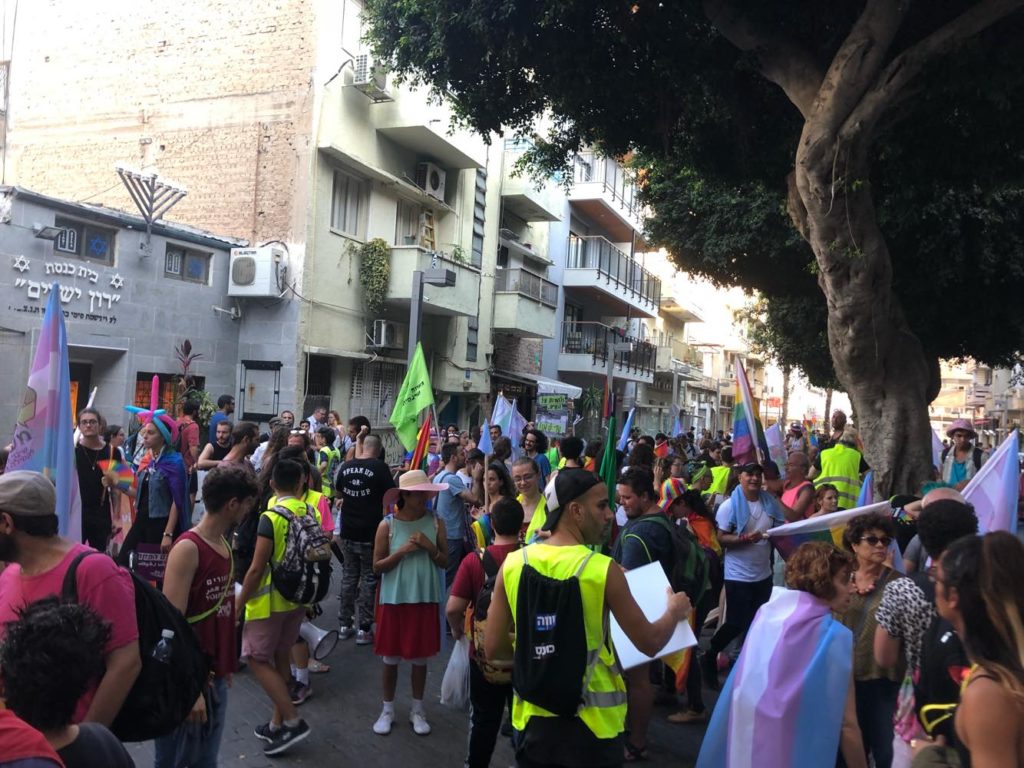 In Tel Aviv, members of the LGBTQ community and allies march in support of surrogacy rights for gay male fathers. Photo by Hannah Simpson

The protests continued at a rally in Tel Aviv’s Rabin Square Sunday night, where hundreds of rainbow flags joined Israeli flags to wave and pulse to blaring pop music. Sunday marked Tisha B’Av, a Jewish fast day that ended at sundown, in time for thousands more to turn up for the evening’s protest.

Throughout the day, the rallying cry expanded to a general message of equality for LGBTQ people in Israel.

“I think the tens of thousands of Israelis who are in this square are making the point that this is not who we are, that this government shouldn’t be caving to a bigoted minority,” said Hannah Simpson, a 33-year-old writer from New York City who was in Rabin Square participating in the protest. “The point has come when enough is enough.”

Giaoui said a fair solution would be to put the issue to a nationwide vote via referendum. “Not all Israelis are conservative,” he said. “So it’s not fair that a small conservative minority in parliament should decide on this issue.”

Israel does not allow same-sex marriage, but recognizes marriages that happen in other countries. Israel has in recent years positioned itself as a destination for LGBTQ-friendly tourism, a move that has drawn criticism from some LGBTQ groups, who say those marketing efforts are a tactic to distract from the government’s treatment of Palestinians.

Israeli police told the Associated Press that two people at the earlier protests were arrested and later released.

The prime minister’s office could not be reached for comment. Netanyahu told Reuters that had he supported the fathers’ amendment, the entire bill would have been blocked in parliament, denying single women surrogacy rights.

Left: People gather in Tel Aviv on July 22, 2018, to protest an amendment that excludes gay male couples from parenting via surrogacy. Photo by Hannah Simpson