TOKYO — President Donald Trump opened a state visit to Japan on Saturday by needling the country over its trade imbalance with the United States. “Maybe that’s why you like me so much,” he joshed.

Trump also promoted the U.S. under his leadership, saying “there’s never been a better time” to invest or do business in America, and he urged corporate leaders to come.

The president’s first event after arriving in Tokyo was a reception with several dozen Japanese and American business leaders at the U.S. ambassador’s residence. He said the two countries “are hard at work” negotiating a trade agreement.

“I would say that Japan has had a substantial edge for many, many years, but that’s OK,” Trump said, joking that “maybe that’s why you like me so much.” 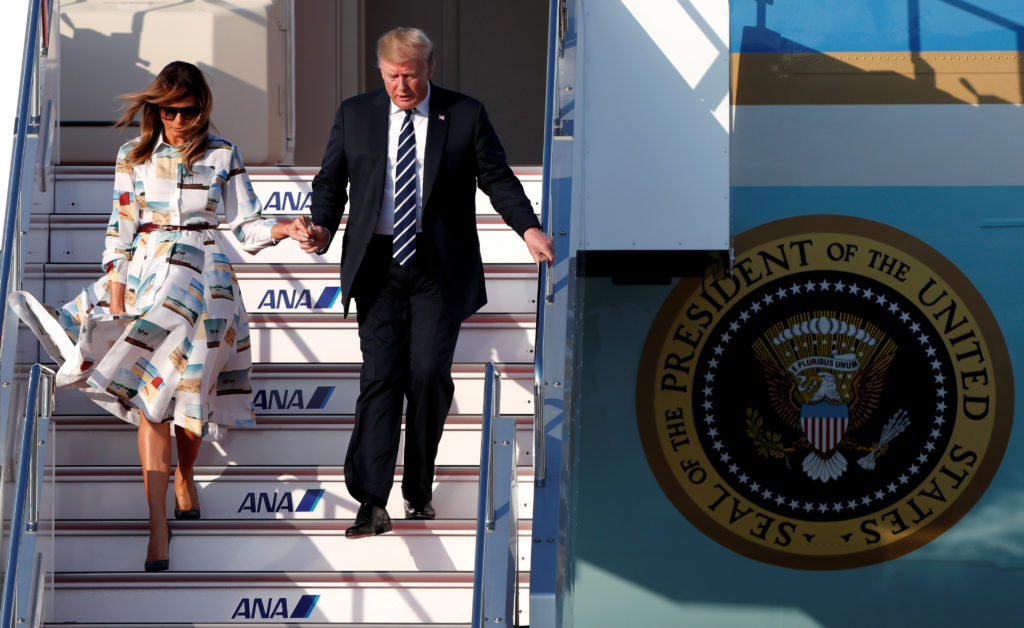 His comments underscored the competing dynamics of a state visit designed to show off the long U.S.-Japan alliance and the close friendship between Trump and Japanese Prime Minister Shinzo Abe even as trade tensions run high.

Trump landed from his overnight flight shortly after a magnitude 5.1 earthquake struck just south of Tokyo and rattled the city.

Abe has planned a largely ceremonial, four-day visit to suit Trump’s whims and ego. It’s part of Abe’s charm strategy that some analysts say has spared Japan from the full weight of Trump’s trade wrath.

Abe and Trump planned to play golf Sunday before Abe gives Trump the chance to present his “President’s Cup” trophy to the winner of a sumo wrestling championship match. The White House said the trophy is nearly 5 feet (1.5 meters) tall and weighs between 60 pounds and 70 pounds (27 kilograms and 32 kilograms).

On Monday, Trump will become the first head of state to meet Emperor Naruhito since he ascended to the throne this month.

“With all the countries of the world, I’m the guest of honor at the biggest event that they’ve had in over 200 years,” Trump said before the trip.

The president is threatening Japan with potentially devastating U.S. tariffs on foreign autos and auto parts. He has suggested he will go ahead with the trade penalties if U.S. Trade Representative Robert Lighthizer fails to win concessions from Japan and the European Union.

Trump had predicted that a U.S.-Japan trade deal could be finalized during his trip. But that’s unlikely given that the two sides are still figuring out the parameters of what they will negotiate.

He nonetheless portrayed the negotiations in a positive light in his remarks to the business group.

“With this deal we hope to address the trade imbalance, remove barriers to United States exports and ensure fairness and reciprocity in our relationship. And we’re getting closer,” Trump said. He also urged the business leaders to invest more in the U.S.

He praised the “very special” U.S.-Japan alliance that he said “has never been stronger, it’s never been more powerful, never been closer.”

Abe made a strategic decision before Trump was elected in November 2016 to focus on Japan’s relationship with the U.S.

Abe and Trump are likely to meet for the third time in three months when Trump returns to Japan in late June for a summit of leading rich and developing nations.

Behind the smiles and personal friendship, however, there is deep uneasiness over Trump’s threat to impose tariffs on Japanese autos and auto parts on national security grounds. Such a move would be more devastating to the Japanese economy than earlier tariffs on steel and aluminum.

Also at issue is the lingering threat of North Korea, which has resumed missile testing and recently fired a series of short-range missiles that U.S. officials, including Trump, have tried to play down despite an agreement by the North to hold off on further testing.

Trump’s national security adviser, John Bolton, told reporters Saturday before Trump arrived that the short-range missile tests were a violation of U.N. Security Council resolutions and that sanctions must stay in place.

Bolton said Trump and Abe would “talk about making sure the integrity of the Security Council resolutions are maintained.”

It marked a change in tone from the view expressed by U.S. Secretary of State Mike Pompeo in a recent television interview. He said “the moratorium was focused, very focused, on intercontinental missile systems, the ones that threaten the United States.” That raised alarm bells in Japan, where short-range missiles pose a serious threat.

Bolton commented a day after North Korea’s official media said nuclear negotiations with Washington would not resume unless the U.S. abandoned what the North described as demands for unilateral disarmament.

Virus adds to fears for targets of Muslim crackdown in China

How to help those in need in Venezuela

Utility to pay $53 million for blasts that damaged homes, killed 1

Congress makes lynching a federal crime, 65 years after Emmett Till