Turkey opened a third bridge connecting Istanbul’s Asian and European sides on Friday. The Yavuz Sultan Selim Bridge stretches across the Bosphorus Strait, which flows between the two continents.

The $3 billion bridge is part of $200 billion worth of construction initiatives pushed by President Recep Tayyip Erdogan.

Spanning the northern part of the Bosphorus, the bridge is 4,620 feet long. With a width of 192 feet and a height of 1,056 feet, officials describe it as the world’s tallest suspension bridge. 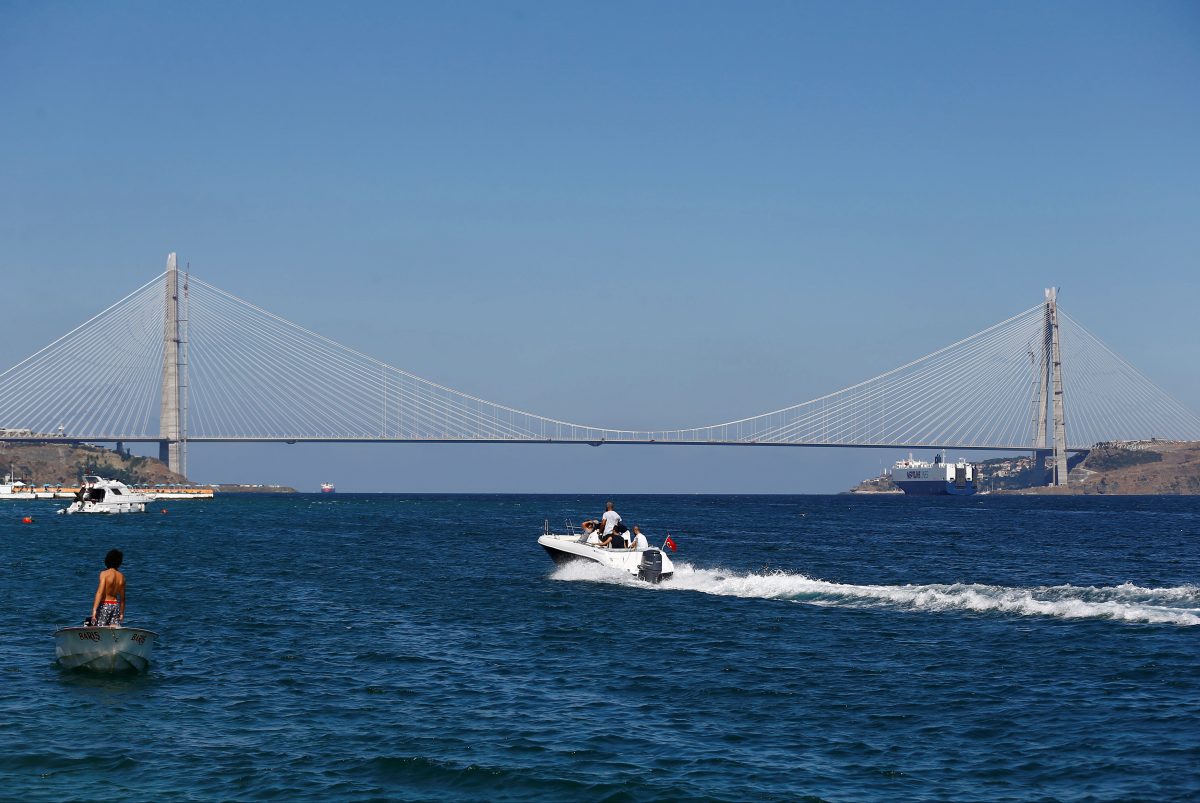 “This bridge puts Turkey among the world leaders,” Michel Virlogeux, one of the project’s lead designers, told Agence France-Presse. “It’s the most spectacular to have been built in the last years.”

Erdogan and architects have championed the new construction, which holds eight lanes for vehicles and two for transit rails, as a way to ease heavy traffic in Istanbul, a city of more than 14 million people. The Associated Press reported that heavy trucks must use the new bridge, which could ease congestion because it is located farther from the city than the two other bridges.

“It not only alleviates traffic in Istanbul, it speeds movement of goods across Turkey and, as Syria stabilizes, the importance of the link will increase,” said Paolo Astaldi, chairman of Astaldi, a construction group that helped build the bridge. 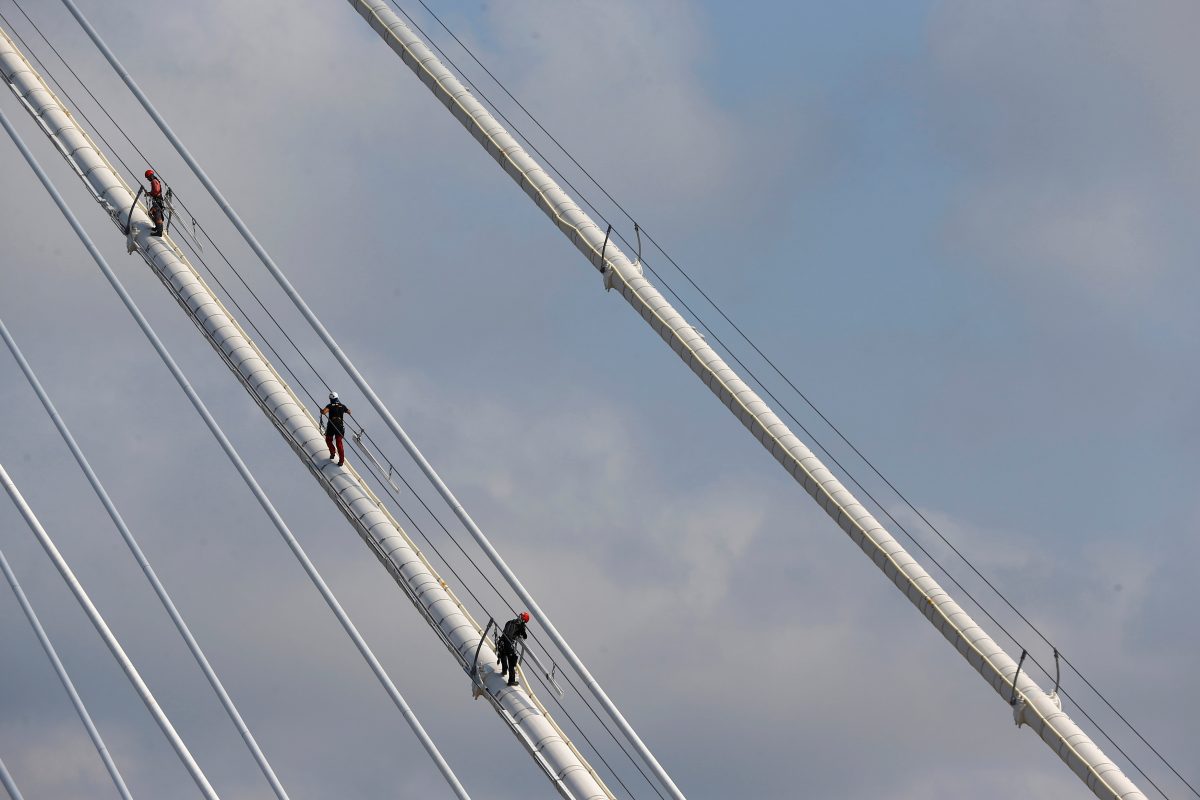 Workers climb up to a tower of the Yavuz Sultan Selim Bridge, the third Bosphorus bridge linking the European and Asian sides of Istanbul, Turkey, August 23, 2016. Picture taken August 23, 2016. Photo by Osman Orsal/Reuters

But some critics disagree, raising environmental concerns. In particular, they have criticized the destruction of Istanbul’s last remaining forestland to create roads leading up to the bridge. 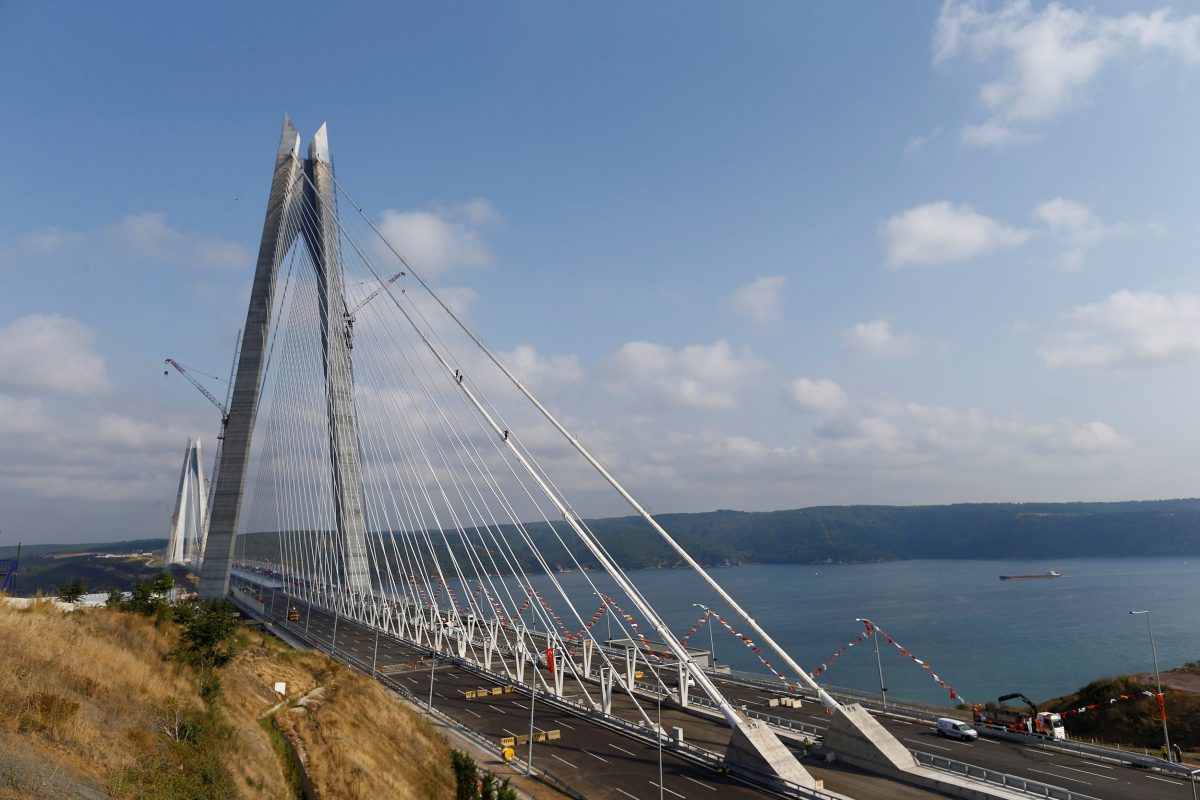 Naming the bridge after Selim I, who served as the ninth Ottoman emperor and oversaw a period of expansion, has also generated resistance.

The Alevi religious minority, which according to the Washington Post comprises more than 10 percent of the Turkish population, blames Selim’s troops for slaughtering tens of thousands of their population. Since the announcement of the name in 2013, protesters have unsuccessfully argued to change it.

At the opening ceremony, Erodgan indicated that the bridge and other infrastructure achievements would be part of his legacy. “When man dies, he leaves behind a monument,” he said.

Left: Red and white balloons are released during the opening ceremony of newly built Yavuz Sultan Selim bridge, the third bridge over the Bosphorus linking the city's European and Asian sides in Istanbul, Turkey on August 26, 2016. Photo by Murad Sezer/Reuters