ANKARA, Turkey (AP) — A car bomb in northern Syria killed at least eight civilians and wounded 20 others Sunday in a town near the border with Turkey, Turkey’s Defense Ministry said.

The explosion struck a town south of the city of Tal Abyad, the ministry said. The city was captured last month by Turkish troops and Turkey-backed opposition forces from Kurdish-led fighters.

The ministry blamed Syrian Kurdish fighters for the attack, accusing them of “massacring innocent civilians.”

The attack came more than a week after a similar car bomb attack in central Tal Abyad killed 13 people.

Turkey invaded northeast Syria last month to push out Syrian Kurdish fighters near the border. The military offensive has since displaced around 200,000 people.

Ankara considers the Kurdish-led forces to be terrorists because of their links to Kurdish militants fighting inside Turkey. 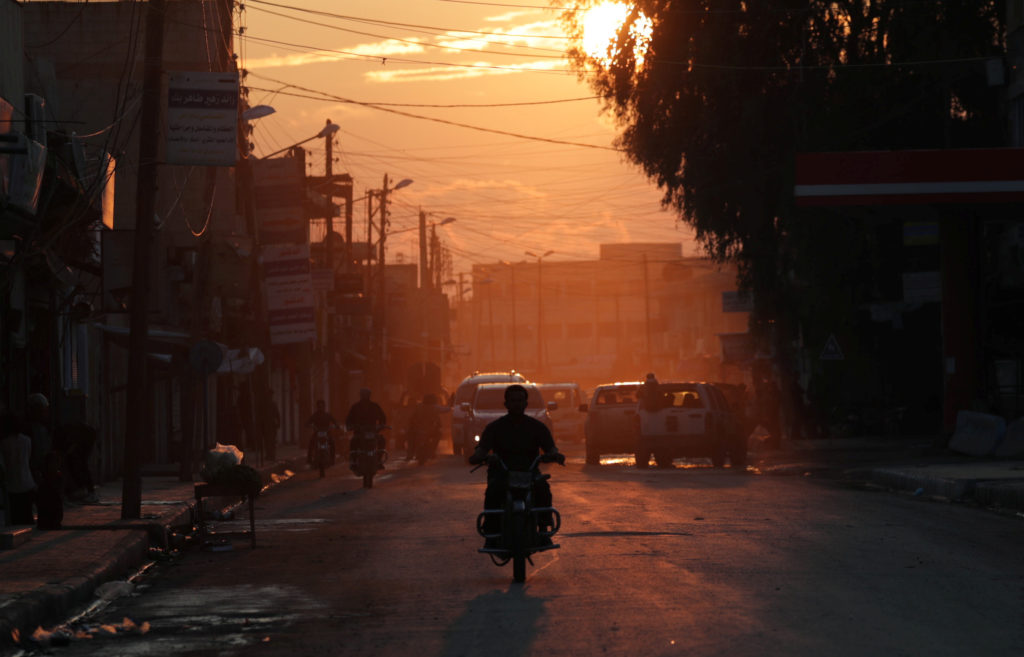 A man rides a motorcycle in street traffic at dusk in Tal Abyad, Syria October 29, 2019. Photo by Khalil Ashawi/Reuters.

The Kurdish groups have called in Syrian government forces to halt Turkey’s advance.

Despite a shaky truce brokered by Russia, Syrian government forces have since clashed with Turkish troops and Turkey-backed opposition fighters.

Syrian government troops fought for a second day with Turkish-led forces in an area between the towns of Tal-Tamr and Ras al-Ayn, according to a war monitor, Syria’s state media and activists. At least four Syrian government soldiers were killed in the fighting Saturday.

Russia mediated a cease-fire whereby Syrian government forces deployed along parts of the border but also left Turkey in control of a stretch of land inside Syria.

Left: Turkish and Russian military vehicles return following a joint patrol in northeast Syria, as they are pictured from near the Turkish border town of Kiziltepe in Mardin province, Turkey, November 1, 2019. Photo by Kemal Aslan/Reuters.