KASTANIES, Greece — Thousands of migrants and refugees massed at Turkey’s western frontier Sunday, trying to enter Greece by land and sea after Turkey said its borders were open to those hoping to head to Europe. In Syria, Turkish troops shot down two Syrian warplanes after the Syrian military downed a Turkish drone, a major escalation in the direct conflict between Syrian and Turkish forces.

Turkey’s decision to ease border restrictions came amid a Russia-backed Syrian government offensive into Syria’s northwestern Idlib province. That offensive has killed dozens of Turkish troops and led to a surge of nearly a million Syrian civilians fleeing the fighting toward Turkey’s sealed border.

Turkey backs the Syrian rebels fighting in Idlib province, and has sent thousands of troops into the area. Idlib is the last opposition-held stronghold in Syria, and is dominated by al-Qaida linked fighters.

A Turkish official said the fighting in Idlib was directly linked to Turkey’s decision to open the gates for refugees to Europe. He said Ankara had changed its focus to preparing for the possibility of new arrivals from Syria “instead of preventing refugees who intend to migrate to Europe.”

“Europe and others must take robust action to address this monumental challenge,” said Fahrettin Altun, the communications director for Turkey’s President Recep Tayyip Erdogan. “We can’t be expected to do this on our own.” 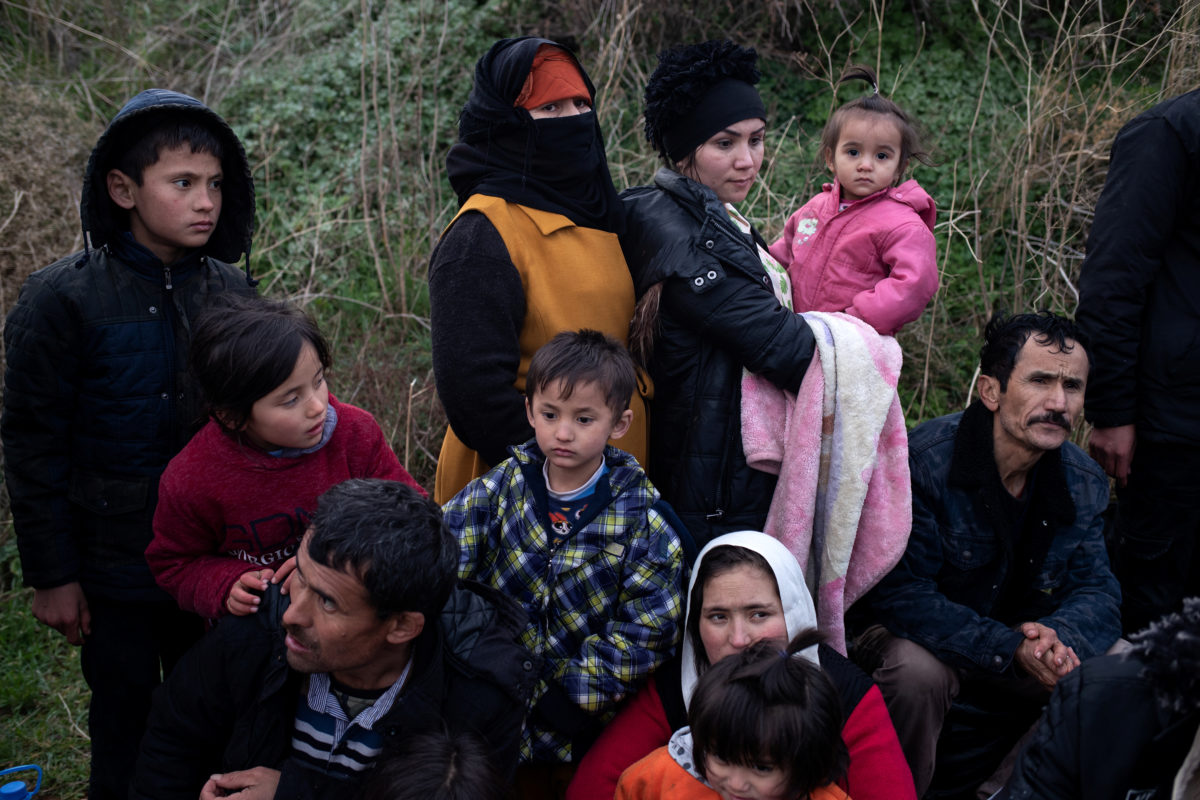 Migrants from Afghanistan are seen following their arrival on a beach, after crossing part of the Aegean Sea from Turkey to the island of Lesbos, Greece, March 1, 2020. Photo by Alkis Konstantinidis/Reuters.

Erdogan’s decision open his country’s borders with Europe made good on a longstanding threat to let refugees into the continent. His announcement marked a dramatic departure from previous policy of containment, an apparent attempt to pressure Europe into offering Turkey more support in dealing with the fallout from the Syrian war to its south.

Under a 6 billion euro deal in 2016, Turkey agreed to stem the tide of refugees to Europe in return for financial aid, after more than a million people entered Europe in 2015. It has since accused the EU of failing to honor the agreement, and Erdogan has frequently threatened to allow refugees and migrants to head to Europe unless more international support was provided. Turkey already hosts 3.6 million Syrian refugees, as well as others from Africa, Asia and the Middle East.

On the Greek-Turkish land border, Greek army and police patrols using tear gas and stun grenades to thwart attempts overnight by thousands to push into the country. Officials said the situation was much calmer Sunday morning. But in the afternoon, authorities used tear gas and water cannons to push back another crowd attempting to cross. Migrants threw rocks and other objects, and one policeman was injured.

In Istanbul, a steady stream of buses, taxis, cars and minibuses were ferrying hundreds of migrants throughout Sunday to Edirne, a town near the border with Greece. The vehicles weren’t part of any regular bus route.

Those boarding the buses — the vast majority Afghans — said they were heading to Greece and eventually hoped to get to Germany.

On the Greek islands, initial figures showed about 500 people had arrived from the nearby Turkish coast by Sunday afternoon. If the trend continued, it would mark an increase in the usual number of people who arrive on eastern Aegean islands from Turkey.

Existing migrant camps on the islands are already dramatically overcrowded, and tensions there have mounted.

In a small harbor on Lesbos, angry local residents refused to allow migrants — including families with young children and babies — to disembark from a dinghy that had just arrived. Groups of migrants who arrived on other parts of the island remained there for hours because locals prevented buses from reaching them to transport them to the main camp.

More than 19,300 people already live in and around island’s migrant camp, which has a capacity of 2,840. Protests by local residents last week over the migrant situation degenerated into clashes with riot police on Lesbos and Chios.

Greece said it was using “all available means” to tell migrants that the country’s borders were closed, including text messages to foreign mobile phones in the border area.

In Syria, fighting escalated on the ground and in the skies.

Syria’s official news agency SANA said the four pilots ejected and landed safely after their two jets were shot down. Turkey’s Defense Ministry said it had hit the two SU-24 aircraft as well as Syrian air defense systems after one of its aerial drones was downed.

Earlier Sunday, Syria said northwestern airspace was closed and any aircraft or drone that entered “will be treated as hostile and shot down.”

The crisis in Idlib stems from a Syrian government offensive with Russian military support, which began Dec. 1. The heavy fighting triggered a humanitarian catastrophe and the single largest wave of displacement in Syria’s nine-year civil war, with about 950,000 civilians fleeing their homes. 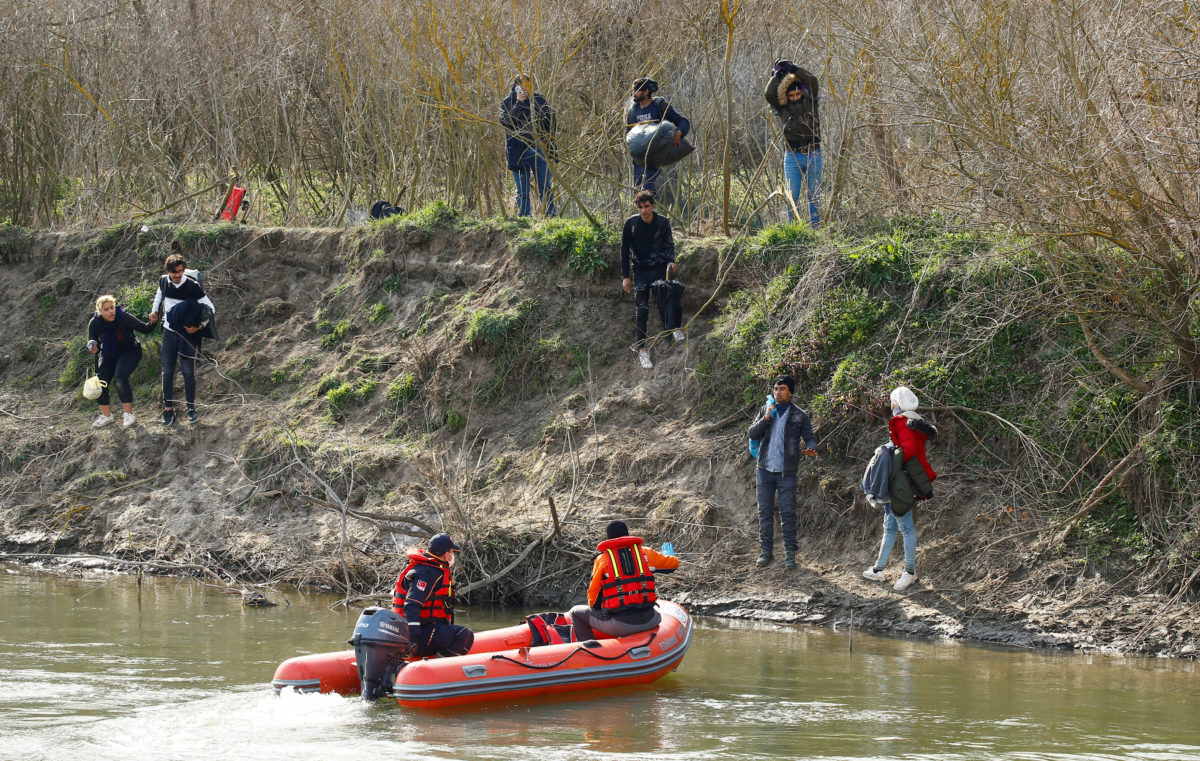 Disaster and Emergency Management (AFAD) members approach migrants who reached Greece after crossing the Evros river, as they are pictured from the Turkish border village of Elcili, Turkey March 1, 2020. Photo by Huseyin Aldemir/Reuters.

Turkey is worried it might come under renewed international pressure to open its now-sealed border with Syria and offer refuge to hundreds of thousands more Syrian civilians.

Turkish Defense Minister Hulusi Akar, speaking from a military headquarters near the Syrian border, said Turkey aimed to confront Syrian government forces rather than Russian troops. He called on Moscow to persuade Syria’s President Bashar Assad to withdraw to 2018 cease-fire lines on the edges of Idlib.

Referring to losses inflicted on Syria, he said Turkey had “neutralized” more than 2,200 Syrian troops, 103 tanks and eight helicopters. The operation is Turkey’s fourth in the war-torn country since 2016.

Altun, the Turkish communications director, claimed 80,888 migrants had left Turkey for Europe “in the past several days.” There was no evidence to support his claim. Greece’s Foreign Ministry tweeted that these numbers were “false and misleading.”

Greek Deputy Defense Minister Alkiviadis Stefanis told the local broadcaster Skai there were around 9,600 attempts to illegally cross Greece’s border overnight Saturday into Sunday. He said all were successfully thwarted. Previously, several dozen migrants had managed to make it through.

Twenty-year-old Afghan Ayamuddin Azimi made it to the Greek border village of Nea Vyssa along with a compatriot. He said Turkey had opened its borders “to save the refugees” but when they got to the frontier they found the Greek side closed.

He said he crossed clandestinely anyway. “What can I do? We have nothing to do. This is our life.”

Left: A child cries as migrants on a dinghy with a damaged engine, who crossed part of the Aegean Sea from Turkey, are prevented by locals from docking at the port of Thermi, on island of Lesbos, Greece, March 1, 2020. Photo by Alkis Konstantinidis/Reuters.