Typhoon leaves as many as 33 dead as Japan continues rescue

TOKYO — Helicopters, boats and thousands of troops were deployed across Japan to rescue people stranded in flooded homes Sunday, as the death toll from a ferocious typhoon climbed to as high as 33. One woman fell to her death as she was being placed inside a rescue helicopter.

Typhoon Hagibis made landfall south of Tokyo on Saturday evening and battered central and northern Japan with torrents of rain and powerful gusts of wind. The typhoon was downgraded to a tropical storm on Sunday.

Public broadcaster NHK said 14 rivers across the nation had flooded, some spilling out in more than one spot.

The Tokyo Fire Department said a woman in her 70s was accidentally dropped 40 meters (131 feet) to the ground while being transported into a rescue helicopter in Iwaki city in Fukushima prefecture, a northern area devastated by the typhoon. 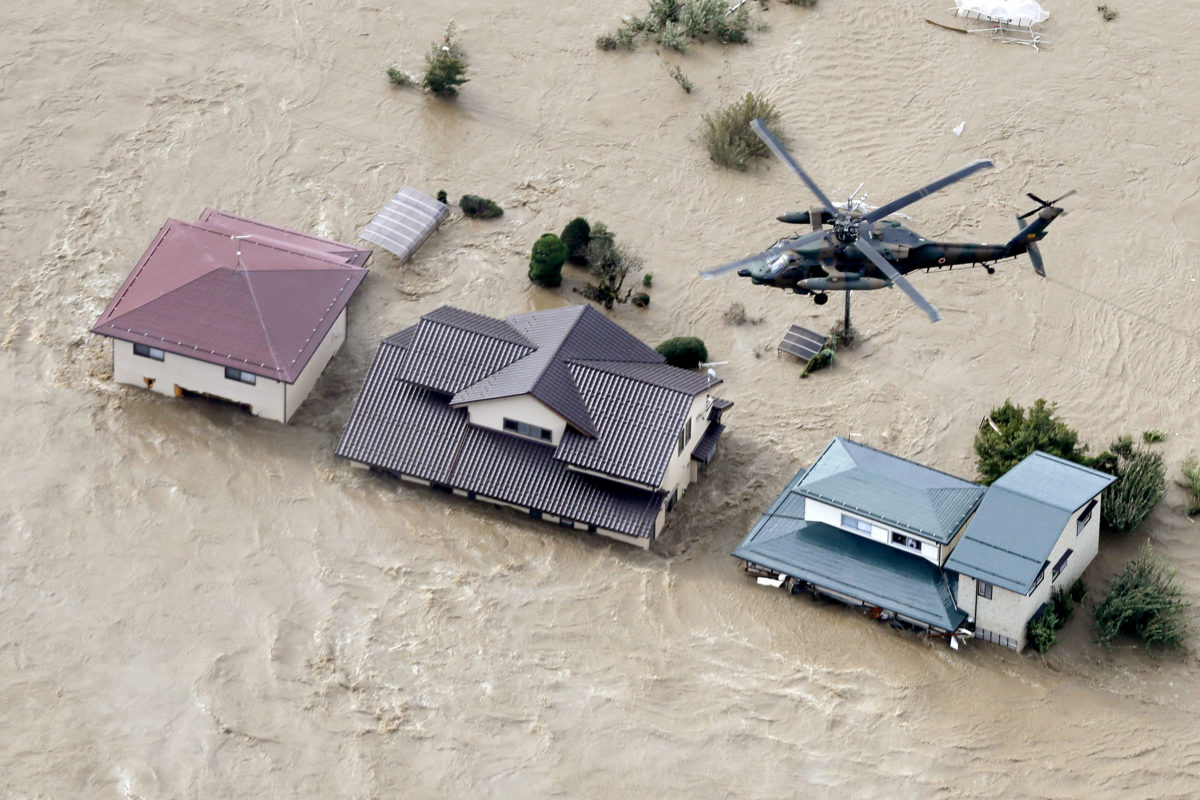 Department officials held a news conference to apologize, bowing deeply and long, according to Japanese custom, and acknowledged the woman had not been strapped in properly.

The government’s Fire and Disaster Management Agency, which tends to be conservative in its counts, said late Sunday that 14 people died, 11 were missing and 187 were injured as a result of the typhoon. It said 1,283 homes were flooded and 517 were damaged, partially or totally.

News footage showed a rescue helicopter hovering in a flooded area in Nagano prefecture where an embankment of the Chikuma River broke, and streams of water were continuing to spread over residential areas. The chopper plucked those stranded on the second floor of a home submerged in muddy waters.

Aerial footage showed tractors at work trying to control the flooding and several people on a rooftop, with one waving a white cloth to get the attention of a helicopter. Nearby was a child’s school bag. In another part of Nagano, rows of Japan’s prized bullet trains, parked in a facility, were sitting in a pool of water.

A section of the city of Date in Fukushima prefecture was also flooded, with only rooftops of residential homes visible in some areas, and rescuers paddled in boats to get people out. Parts of nearby Miyagi prefecture were also underwater.

The Tama River, which runs by Tokyo, overflowed its banks, flooding homes and other buildings in the area.

Among the reported deaths were those whose homes were buried in landslides. Other fatalities included people who got swept away by raging rivers.

Early Sunday, Suga said that some 376,000 homes were without electricity, and that 14,000 lacked running water. 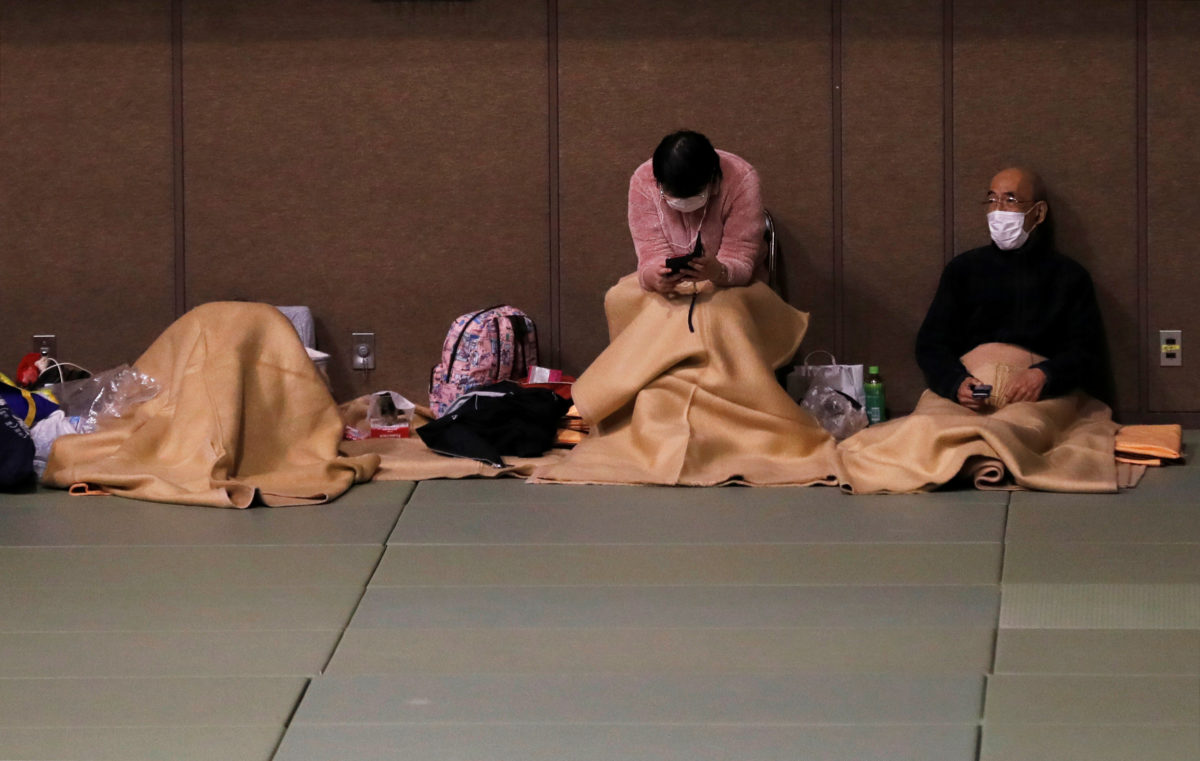 People sit in the evacuation centre for affected by the flood after Typhoon Hagibis in Nagano, Nagano Prefecture, Japan, October 13, 2019. Photo by Kim Kyung-Hoon/Reuters.

Several train services in the Tokyo area resumed early in the morning, while others restarted later.

Ruling party politician Fumio Kishida said the government would do its utmost in rescue operations, including making sure that those who moved to shelters were taken care of.

He acknowledged that Japan’s power grids need to be strengthened so people in disaster areas can rely on timely information.

“So many risks remain, and it is a reality that we must stay on guard,” Kishida said on news talk show on NHK. “We must do our utmost. In these times, a disaster can hit anytime.”

The Rugby World Cup match between Namibia and Canada, scheduled for Sunday in Kamaishi, in northern Japan, was canceled as a precautionary measure, but Japan played Scotland, to a win, as scheduled Sunday evening. Matches on Saturday had been canceled. Stores and amusement parks had also closed, and some Tokyo stores remained closed Sunday.

As the typhoon bore down on Saturday with heavy rain and strong winds, the usually crowded train stations and bustling streets of Tokyo were deserted. But life was returning to normal on Sunday, and flights that had been grounded from Tokyo airports were gradually being resumed.

Evacuation centers had been set up in coastal towns, with tens of thousands seeking shelter. Kyodo News agency said evacuation warnings had been issued to more than 6 million people.

The typhoon disrupted a three-day weekend in Japan that includes Sports Day on Monday.

The authorities had repeatedly warned that Hagibis was on par with a typhoon that wreaked havoc on the Tokyo region in 1958, but the safety infrastructure that Japan’s modernization has brought was apparent. The typhoon six decades ago left more than 1,200 people dead and half a million houses flooded.