HONG KONG — Typhoon Mangkhut barreled into southern China on Sunday after lashing the northern Philippines with strong winds and heavy rain that left at least 64 people dead and dozens more feared buried in a landslide.

More than 2.4 million people had been evacuated in southern China’s Guangdong province by Sunday evening to flee the massive typhoon.

More than 2.4 million people had been evacuated in southern China’s Guangdong province by Sunday evening to flee the massive typhoon and nearly 50,000 fishing boats were called back to port, state media reported.

The gambling enclave of Macau closed casinos for the first time and the Hong Kong Observatory warned people to stay away from the Victoria Harbour landmark, where storm surges battered the sandbag-reinforced waterfront.

Hong Kong’s RTHK broadcaster cited experts as saying Mangkhut was expected to be the strongest typhoon to hit the city in decades. The Hong Kong Observatory issued its strongest storm warning for 10 hours on Sunday, just slightly shorter than the record time of 11 hours set by Typhoon York in 1999, the South China Morning Post reported. 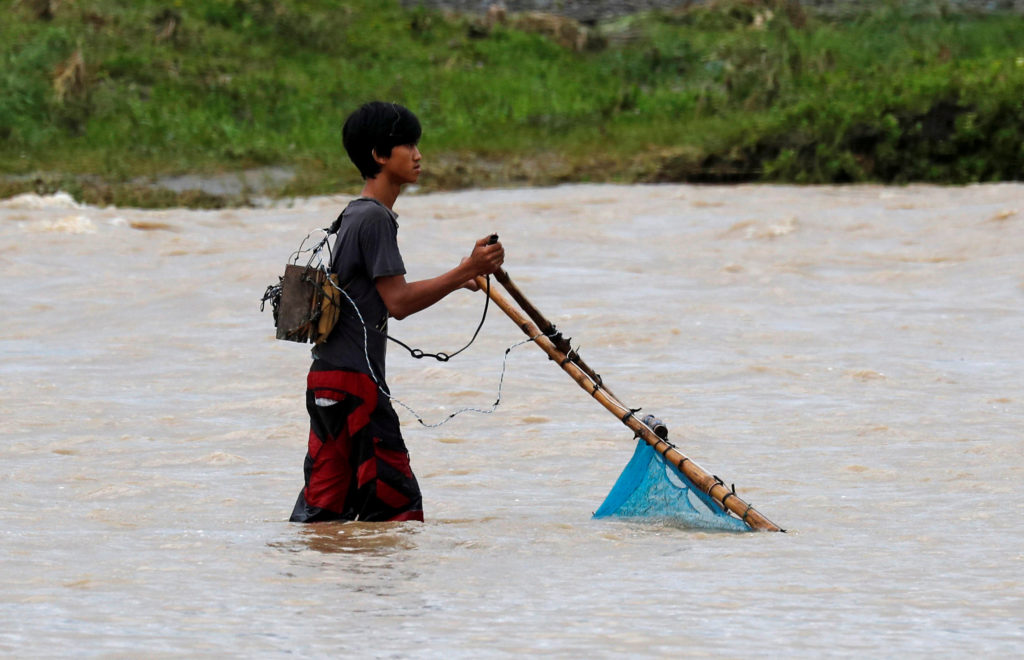 A man uses a net, operated by electricity from a car battery, to catch fish in a river a day after Typhoon Mangkhut hit Bambang, Nueva Vizcaya, in the Philippines, September 16, 2018. Photo by Erik De Castro/Reuters

The storm made landfall in the Guangdong city of Taishan at 5 p.m., packing wind speeds of 162 kilometers (100 miles) per hour. State television broadcaster CGTN reported that surging waves flooded a seaside hotel in the city of Shenzhen.

Groceries flew off the shelves of supermarkets in the provincial capital of Guangzhou as residents stocked up in anticipation of being confined at home by the typhoon, China’s official Xinhua News Agency said.

Authorities in southern China issued a red alert, the most severe warning, as the national meteorological center said the densely populated region would face a “severe test caused by wind and rain” and urged officials to prepare for possible disasters.

Hundreds of flights were canceled. All high-speed and some normal rail services in Guangdong and Hainan provinces were also halted, the China Railway Guangzhou Group Co. said.

In Hong Kong, a video posted online by residents showed the top corner of an old building break and fall off, while in another video, a tall building swayed as strong winds blew. 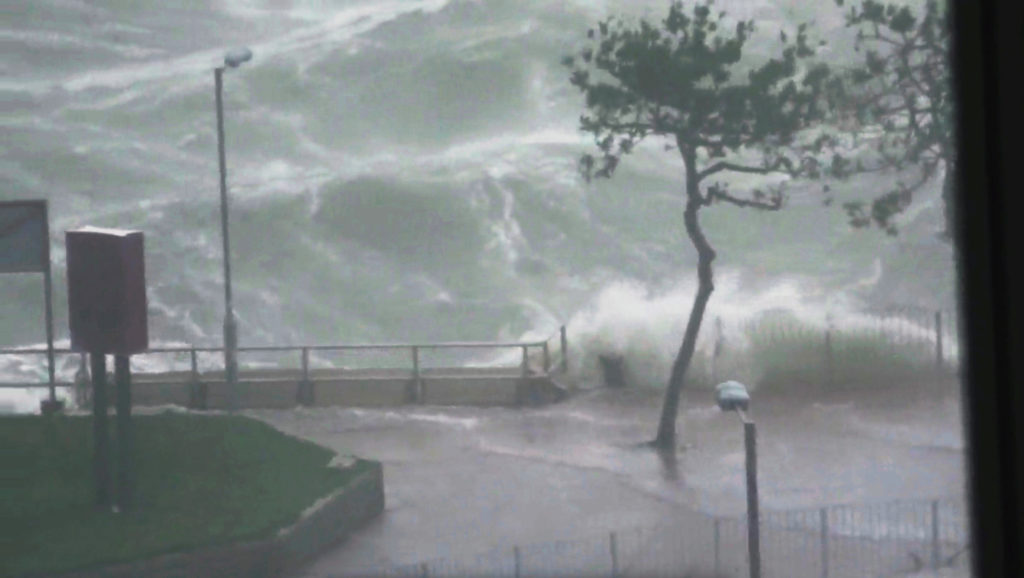 “Because Mangkhut will bring winds and rains of extraordinary speeds, scope and severity, our preparation and response efforts will be greater than in the past,” Lee said. “Each department must have a sense of crisis, make a comprehensive assessment and plan, and prepare for the worst.” 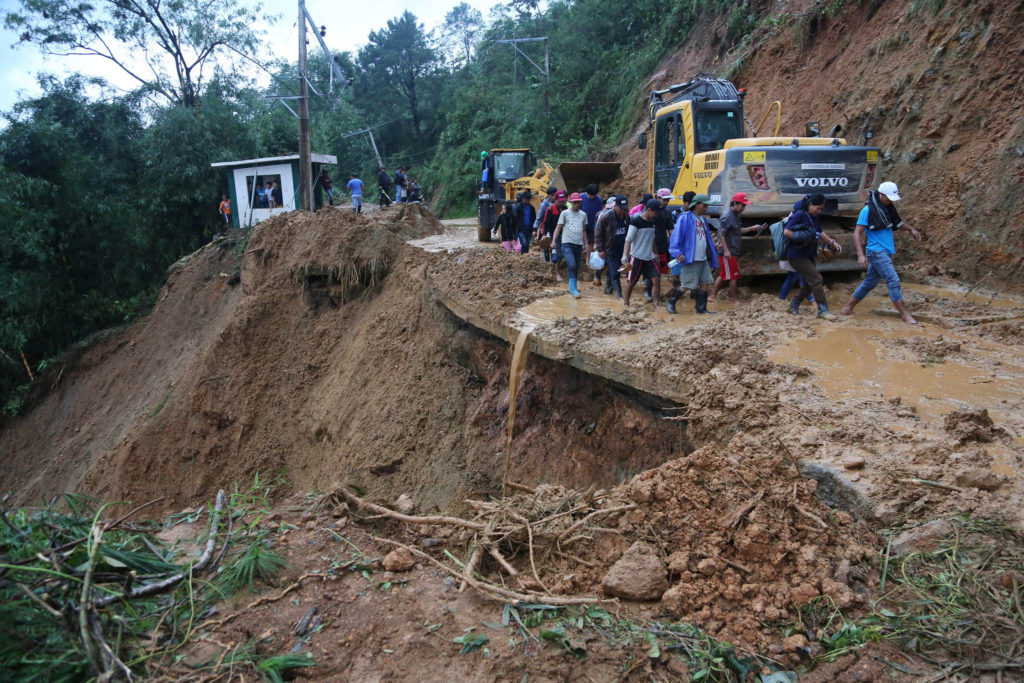 Residents walk past a road damaged at the height of Typhoon Mangkhut near a mining camp that buried people during a landslide in Itogon, Benguet, in the Philippines, September 16, 2018. Photo by Harley Palangchao/Reuters

Hong Kong’s Cathay Pacific said all of its flights would be canceled between 2:30 a.m. Sunday and 4 a.m. Monday. The city of Shenzhen also canceled all flights between Sunday and early Monday morning. Hainan Airlines canceled 234 flights in the cities of Haikou, Sanya, Guangzhou, Shenzhen and Zhuhai scheduled over the weekend.

In Macau, next door to Hong Kong, casinos were ordered to close from 11 p.m. Saturday, the first time such action was taken in the city, the South China Morning Post reported. Macau suffered catastrophic flooding during Typhoon Hato last year, leading to accusations of corruption and incompetence at its meteorological office.

In Macau’s inner harbor district, the water level reached 1.5 meters (5 feet) on Sunday and was expected to rise further. The district was one of the most affected by floods from Typhoon Hato, which left 10 people dead.

In the northern Philippines, Mangkhut made landfall Saturday on the northeastern tip of Luzon island with sustained winds of 205 kilometers (127 miles) per hour and gusts of 255 kph (158 mph).

Dozens of people, mostly small-scale miners and their families, were feared to have been trapped by a landslide in the far-flung village of Ucab in Itogon town in the northern Philippines’ Benguet province, Itogon Mayor Victorio Palangdan said by phone on Sunday.

Palangdan said three villagers who nearly got buried by the huge pile of mud and rocks told authorities they saw residents rush into an old three-story building, a former mining bunkhouse that has been transformed into a chapel, at the height of the typhoon’s onslaught Saturday afternoon.

“That was not an authorized evacuation center,” Palangdan said, but expressed sadness that the villagers, many of them poor miners, had few options to survive in a region where big corporations have profited immensely from gold mines.

Police Superintendent Pelita Tacio said 34 villagers had died and 36 remained missing in the landslides in Ucab and another village in Itogon town. Rescuers were scrambling to pull out the body of a victim from the mound of mud and rocks in Ucab before Tacio left the area Sunday.

“It’s very sad. I could hear villagers wailing in their homes near the site of the accident,” Tacio said by phone. 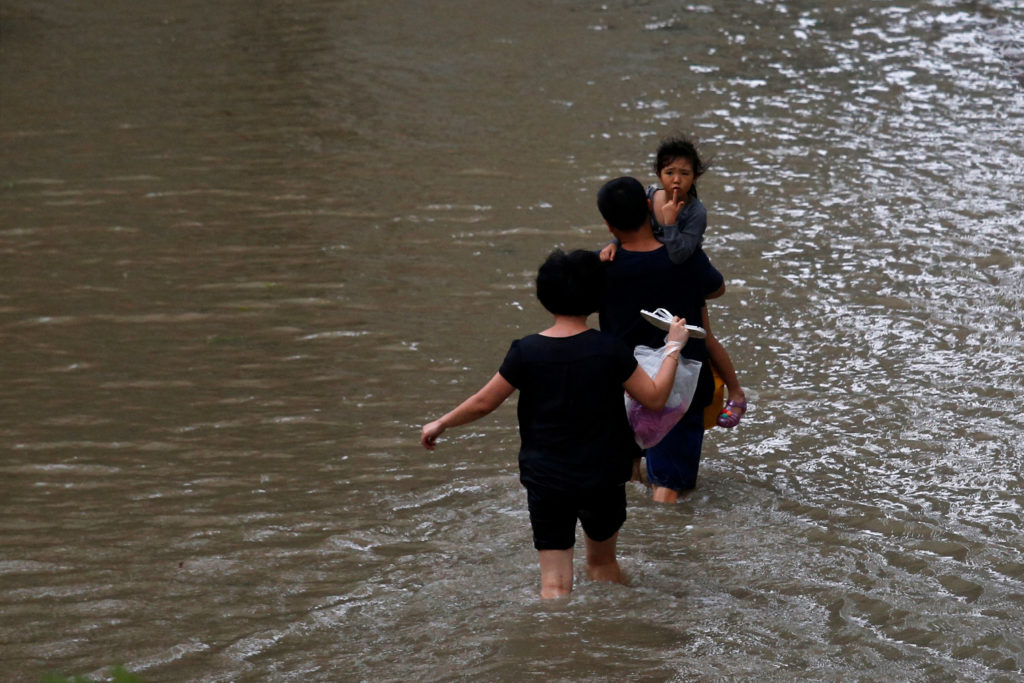 Rescuers were hampered by rain and mud, and the search and rescue operation was suspended at nightfall and will resume at daybreak Monday, Palangdan said. Police and their vehicles could not immediately reach the landside-hit area because the ground was unstable and soaked from the heavy rains, regional police chief Rolando Nana told the ABS-CBN TV network.

Overall, at least 64 people have died in typhoon incidents in the northern Philippines, mostly from landslides and collapsed houses, according to the national police. Forty-five other people were missing and 33 were injured in the storm.

The hardest-hit province was Benguet, where 38 people died, mostly in two landslides, and 37 are missing, the police said.

Still, the Philippines appeared to have been spared the high number of casualties many had feared. In 2013, Typhoon Haiyan left more than 7,300 people dead or missing, flattened villages and displaced more than 5 million in the central Philippines. A massive evacuation ahead of Mangkhut helped lessen potential casualties, with about 87,000 people evacuating from high-risk areas, officials said.

Philippine National Police Director General Oscar Albayalde told The Associated Press that 20 people died in the Cordillera mountain region, four in nearby Nueva Vizcaya province and another outside of the two regions. Three more deaths were reported in northeastern Cagayan province, where the typhoon made landfall.

The typhoon struck at the start of the rice and corn harvesting season in the Philippines’ northern breadbasket, prompting farmers to scramble to save what they could of their crops, Cagayan Gov. Manuel Mamba said.

Left: A view of a landslide that buried residents at the height of Typhoon Mangkhut that hit Baguio City in Philippines, on Sept. 16, 2018. Photo by Harley Palangchao/Reuters