Exploring Ukraine: past and present

Sunday on NewsHour Weekend we took a look at the history and politics of Russia and Ukraine to dig deeper into what tensions underlie the current conflict.

Below you’ll find additional writings from those experts, images from Ukraine’s past, and links to explore one thousand years of history. 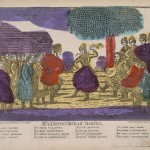 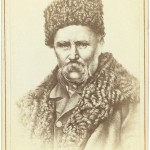 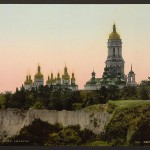 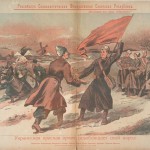 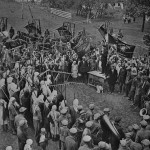 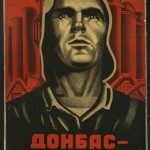 “Donbas — Until We Overcome.” 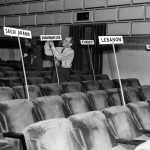 Ukrainian SSR gets its own seat at the UN 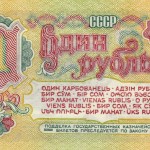 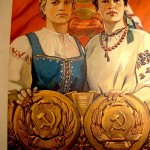 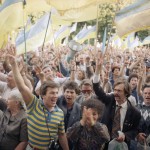 Outside the parliament building in Kiev on Tuesday, Sept. 4, 1991

Notes on the images:

Ukrainian dance. The image, Mallorossiskaia pliaska, comes from the Russkii narodnyi lubok ; al’bom, published in 1885,  from the collection of the New York Public Library.

Taras Shevchenko is celebrated as Ukraine’s national poet and the founder of Ukraine’s literary tradition. The Ukrainian language was prohibited during many years of the Tsarist reign. There is a statue of Shevchenko on P Street between 22 and 23rd Streets in Washington D.C. Find out more from the Library of Congress’ Taras Shevchenko collection.

General meeting to discuss harvesting on a collective farm, Kiev (vicinity), Ukraine, USSR (Union of Soviet Socialist Republics. This image, taken between 1930 and 1940 is part of a larger collection of life in the USSR held at the Library of Congress.

“Donbas — Until We Overcome” The Donets Basin (Donetsk area) in Eastern Ukraine was home to some of the largest factories in the Soviet Union. Today the area is the location of clashes between pro-Russian and pro-Ukrainian groups. Poster from the Dr. Harry Bakwin and Dr. Ruth Morris Bakwin Soviet Posters Collection, Special Collections Research Center, The University of Chicago Library.

Soviet Ruble. The currency of the USSR used the languages from all 15 republics. The largest Russian, is followed directly by Ukrainian.

Soviet magazine cover devoted to the 300th anniversary of the reunification of Ukraine with Russia. This 1954 issue of the magazine Огонек or Spark, suggests the important place held by Ukraine in the USSR. With both the “breadbasket” area and the large mines and industrial developments of the Donets Basin, Ukraine was a vital part of the national economy. 1954 was the year that Nikita Krushchev transferred Crimea to the Ukraine SSR as a gift.

Ukrainian Independence, 1991. People wave Ukrainian national flags as they gather outside the parliament building in Kiev on Tuesday, Sept. 4, 1991 during a pro-independence rally. (AP Photo/Dusan Vranic)