KIEV, Ukraine — Voters in Ukraine are casting ballots in a presidential election Sunday after a campaign that produced a comedian with no political experience as the front-runner and allegations of voter bribery.

Opinion polls have shown Volodymyr Zelenskiy who stars in a TV sitcom about a teacher who becomes president after a video of him denouncing corruption goes viral, leading a field of 39 candidates. The polls also had Zelenskiy outpacing incumbent President Petro Poroshenko and former Prime Minister Yulia Tymoshenko, the other top candidates, by a broad margin.

“Zelenskiy has shown us on the screen what a real president should be like,” voter Tatiana Zinchenko, 30, who cast her ballot for the comedian, said. “He showed what the state leader should aspire for — fight corruption by deeds, not words, help the poor, control the oligarchs.”

If no candidate secures an absolute majority of Sunday’s vote, a runoff between the two top finishers would be held April 21.

Concern about the election’s legitimacy spiked in recent days after the interior minister said his department was “showered” with hundreds of claims that supporters of Poroshenko and Tymoshenko offered money in exchange for votes.

Campaign issues included endemic corruption in Ukraine, the struggling economy and a seemingly intractable conflict with Russia-backed separatists in the east of the country of 42 million people.

Like the popular character he plays, Zelenskiy, 41, made corruption a focus of his candidacy. He proposed a lifetime ban on holding public office for anyone convicted of graft. He also called for direct negotiations with Russia on ending the conflict in eastern Ukraine.

“A new life, a normal life is starting,” Zelenskiy said after casting his ballot in Kiev. “A life without corruption, without bribes.”

His lack of political experience helped his popularity with voters amid broad disillusionment with the current generation of politicians.

“There is no trust in old politicians. They were at the helm, and the situation in the country has only got worse — corruption runs amok and the war is continuing,” businessman Valery Ostrozhsky, 66, another Zelenskiy voter, said.

Poroshenko, 53, who was a confectionary tycoon when he was elected five years ago, pushed successfully for the Ukrainian Orthodox Church to be recognized as self-standing rather than a branch of the Russian church.

However, he saw citizen approval of his governing sink amid Ukraine’s economic woes and a sharp plunge in living standards. Poroshenko campaigned on promises to defeat the rebels in the east and to wrest back control of Crimea, which Russia annexed in 2014 in a move that Ukraine and almost all the world views as illegal.

Speaking at a polling station Sunday, the president echoed his campaign promises of taking Ukraine into the European Union and NATO. He said holding a fair and free election was “a necessary condition for our movement forward, to Ukraine’s return to the European family of nations,” and was confident about the balloting despite the bribery allegations.

“I’m sure that the election was well-organized,” Poroshenko said. “The expression of the will of the citizens will be protected.”

The president’s priorities persuaded schoolteacher Andriy Hristenko, 46, to vote for his re-election.

“Poroshenko has done a lot. He created our own church, bravely fought with Moscow and is trying to open the way to the EU and NATO,” Hristenko said. 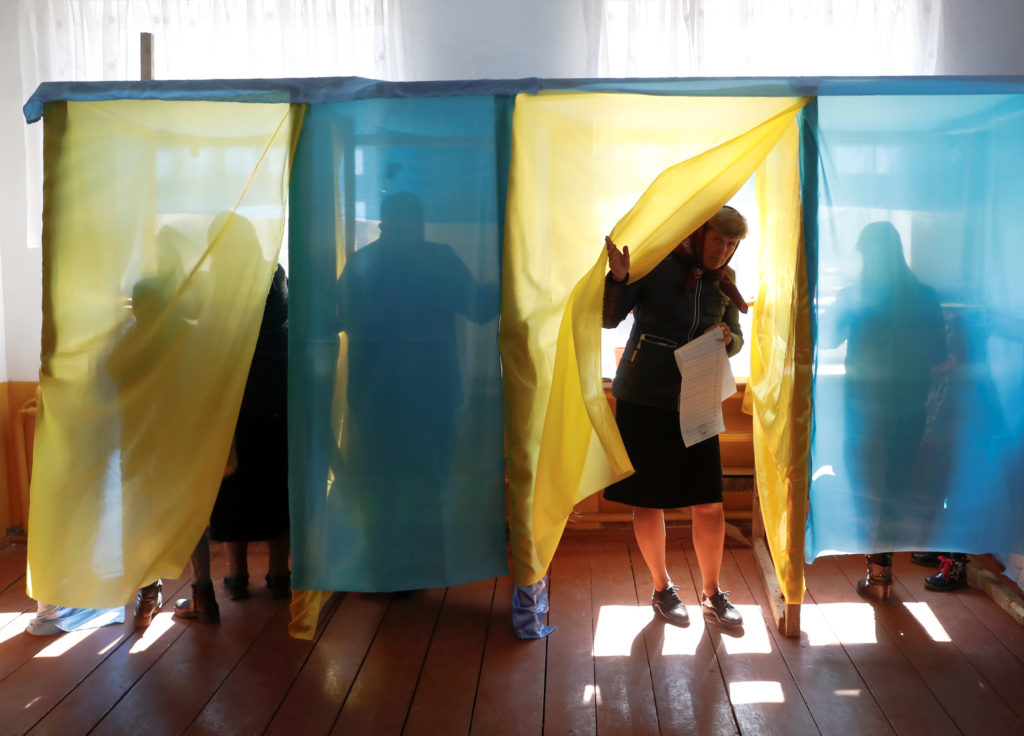 A woman walks out of a voting booth at a polling station during a presidential election in the village of Kosmach in Ivano-Frankivsk Region, Ukraine March 31, 2019. Photo By Kacper Pempel/Reuters

The former prime minister, Tymoshenko, shaped her message around the economic distress of millions of Ukrainians.

“Ukraine has sunk into poverty and corruption during the last five years, but every Ukrainian can put an end to it now,” she said after voting.

During the campaign, Tymoshenko denounced price hikes introduced by Poroshenko as “economic genocide” and promised to reduce prices for household gas by 50 percent within a month of taking office.

A military embezzlement scheme that allegedly involved top Poroshenko’s associates and a factory controlled by the president dogged Poroshenko ahead of the election. Ultra-right activists shadowed him throughout the campaign, demanding the jailing of the president’s associates accused of involvement in the scheme.

However, many political observers described the presidential election as a battle between Poroshenko and Kolomoyskyi, who was on Forbes Magazine’s list of billionaires with a net worth of $1.3 billion in 2014 before dropping off the following year.

Both the president and Kolomoyskyi relied on an arsenal of media outlets under their control to exchange blows. Just days before the election, the TV channel Kolomoyskyi owns aired a new season of the “Servant of the People” TV series in which Zelenskiy stars as Ukraine’s leader.

“Kolomoyskyi has succeeded in creating a wide front against Poroshenko,” said Vadim Karasyov, head of the Institute of Global Strategies, an independent Kiev-based think tank. “Ukraine has gone through two revolutions, but ended up with the same thing — the fight between the oligarchs for the power and resources.”

Mstyslav Chernov in Kiev, Ukraine and Vladimir Isachenkov in Moscow contributed to this report.