KYIV, Ukraine (AP) — Ukraine said it retook a strategically important suburb of Kyiv on Tuesday, while its forces battled Russian attempts to occupy the encircled southern port city of Mariupol.

Civilians fleeing Mariupol said the city was under relentless bombardment, with block after block of destroyed buildings and corpses in the streets. But the Kremlin’s ground offensive in other parts of the country advanced slowly or not at all, knocked back by lethal Ukrainian hit-and-run attacks.

The hands of one exhausted Mariupol survivor were shaking as she arrived by train in the western city of Lviv.

“There’s no connection with the world. We couldn’t ask for help,” said Julia Krytska, who made it out with her husband and son with the help of volunteers. “People don’t even have water there.”

Explosions and bursts of gunfire shook Kyiv, and heavy artillery fire could be heard from the northwest, where Russia has sought to encircle and capture several suburban areas of the capital, a crucial target. 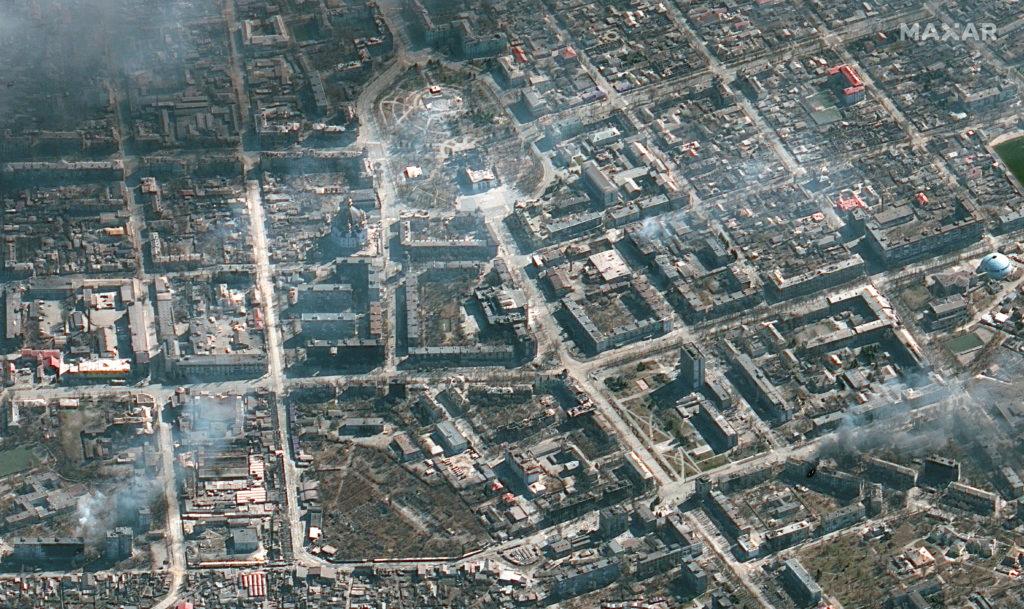 A March 21 satellite image shows an overview of a burning building and a theater in Mariupol, Ukraine. Image by Maxar Technologies via Reuters

Still, the Defense Ministry said Russian forces partially took other northwest suburbs, Bucha, Hostomel and Irpin, some of which had been under attack almost since Russia’s military invaded nearly a month ago.

Russia’s invasion has driven more than 10 million people from their homes, almost a quarter of the population, according to the United Nations.

Thousands of civilians are believed to have died, though the total remains unclear. Estimates of Russian military casualties vary widely, but even conservative figures by Western officials are in the low thousands.

On Monday, Russia’s pro-Kremlin Komsomolskaya Pravda newspaper, citing the Defense Ministry, reported that almost 10,000 Russian soldiers had been killed. The report was quickly removed, and the newspaper blamed hackers. The Kremlin refused to comment.

Beyond the terrible human toll, the war has shaken the post-Cold War global security consensus, imperiled the world supply of key crops, and raised worries it could set off a nuclear accident.

Wildfires broke out near the decommissioned Chernobyl nuclear power plant, but Ukraine’s natural resources minister said they had been extinguished and radiation was within normal levels. Chernobyl in 1986 was the scene of the world’s worst nuclear disaster.

Facing unexpectedly stiff resistance that has left the bulk of Moscow’s ground forces miles from the center of Kyiv, Russian President Vladimir Putin’s troops are increasingly concentrating their air power and artillery on Ukraine’s cities and civilians.

U.S. President Joe Biden, who is heading to Europe later in the week to meet with allies, suggested that worse may lie ahead.

Biden reiterated accusations that Putin is considering resorting to using chemical or biological weapons, though Pentagon spokesman John Kirby said Tuesday that the U.S. has seen no evidence to suggest that use of such weapons is imminent.

Talks to end the fighting have continued by video. Ukrainian President Volodymyr Zelenskyy told Ukrainian television late Monday that he would be prepared to consider waiving any bid by Ukraine to join NATO — a key Russian demand — in exchange for a cease-fire, the withdrawal of Russian troops and a guarantee of Ukraine’s security.

Ukraine refused again on Monday to surrender the industrial port city of Mariupol where hundreds of thousands of residents have been trapped for weeks without food, water or power. Video by PBS NewsHour

“From my outreach with various actors, elements of diplomatic progress are coming into view on several key issues,” he said, enough to end hostilities now. But he gave no further details.

As part of a series of addresses to foreign legislatures, Zelenskyy told Italian lawmakers Tuesday that Mariupol had been destroyed and urged them to strengthen sanctions against Russia, noting many wealthy Russians have homes in the country.

“Don’t be a resort for murderers,” he said in a link from Kyiv. “Block all their real estate, accounts and yachts.”

In the last update from Mariupol officials, they said March 15 that at least 2,300 people had died in the siege. Zelenskyy said 117 children have been killed in the war.

Thousands have managed to flee Mariupol, where the bombardment has cut off electricity, water and food supplies and severed communication with the outside world. The city council said Tuesday that more than 1,100 people who had escaped the siege were in a convoy of buses heading to a city northwest of Mariupol.

But the Red Cross said a humanitarian aid convoy trying to reach the city with desperately needed supplies still had not been able to enter.

Perched on the Sea of Azov, Mariupol is a crucial port for Ukraine and lies along a stretch of territory between Russia and Crimea. The siege has cut the city off from the sea and allowed Russia to establish a land corridor to Crimea.

But it’s not clear how much of the city Russia holds, with fleeing residents saying fighting continues street by street.

Those who have made it out of Mariupol told of a devastated city.

“They bombed us for the past 20 days,” said 39-year-old Viktoria Totsen, who fled into Poland. “During the last five days the planes were flying over us every five seconds and dropped bombs everywhere — on residential buildings, kindergartens, art schools, everywhere.”

Anna reported from Lviv, Ukraine. Associated Press writer Yuras Karmanau in Lviv, and other AP journalists around the world contributed to this report.

Left: Ivan Iustushenko, 5, is wrapped in a Ukrainian flag by his grandmother after fleeing from Mariupol in Ukraine to Romania, following Russia's invasion of Ukraine, at the border crossing in Siret, Romania, March 22, 2022. Photo by Clodagh Kilcoyne/Reuters