KABUL, Afghanistan — More civilians were killed in Afghanistan last year than in any of the previous nine years of the increasingly bloody conflict, according to a U.N. report released Sunday, which blamed the spike in deaths on increased suicide bombings by the Islamic State group and stepped up aerial attacks by U.S.-led coalition forces.

In its annual report, the United Nations Assistance Mission in Afghanistan said 3,804 civilians were killed last year, the highest number since the international organization began tallying figures in 2009. Another 7,189 were wounded.

The report comes amid efforts to find a peaceful end to the 17-year war, which have accelerated since the appointment in September of U.S. peace envoy Zalmay Khalilzad, who is to begin another round of talks with the Taliban on Monday in the Gulf state of Qatar, where they maintain a political office. 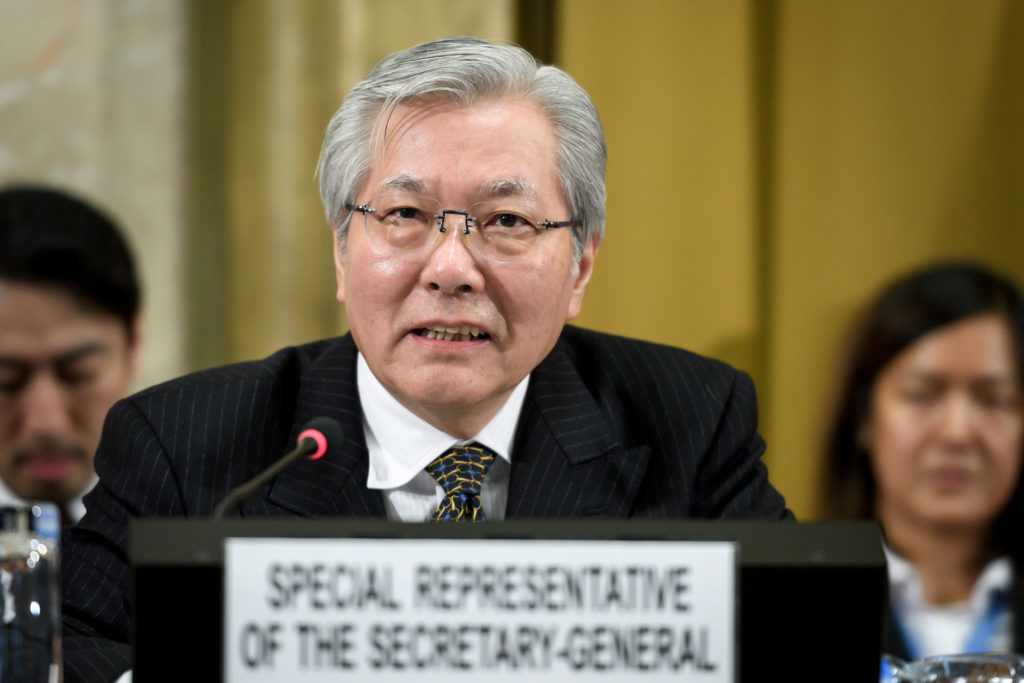 United Nations Special Representative of the Secretary-General for Afghanistan Tadamichi Yamamoto delivers a speech during the UN conference on Afghanistan on November 28, 2018 at the UN Office in Geneva, Switzerland. Fabrice. Pool via Reuters

According to the report, 63 percent of all civilian casualties were caused by insurgents, with the breakdown blaming the Taliban for 37 percent of the dead and wounded, the Islamic State group for 20 percent, and a collection of other anti-government groups for the remaining 6 percent.

The government and its U.S. and NATO allies were blamed for 24 percent of the dead and wounded civilians caught in the crossfire, many of them killed in stepped up aerial attacks, most of which are carried out by the U.S. and NATO, according to the U.N.

The report said civilian casualties at the hands of Afghan and international forces were up significantly in 2018 compared to 2017.

“For the first time since 2009 when it began systematically documenting civilian casualty figures, UNAMA recorded more than 1,000 civilian casualties from aerial operations,” the report said.

The U.S. military says it carried out 6,823 sorties last year in which munitions were fired — the highest number in the last six years.

Last year “witnessed the highest number of civilian casualties ever recorded from suicide attacks and aerial operations,” according to the report.

Since the U.N. began documenting civilian casualties 10 years ago, more than 32,000 civilians have been killed and another 60,000 wounded.

“It is time to put an end to this human misery and tragedy,” said Yamamoto. “The best way to halt the killings and maiming of civilians is to stop the fighting. That is why there is all the more need now to use all our efforts to bring about peace.”

The U.S. and the Taliban have openly embraced a strategy of talking while fighting, with the Taliban carrying out near-daily attacks on Afghanistan’s beleaguered security forces.

Afghan forces are battling the Taliban throughout the country with support from their U.S.-led coalition allies. The coalition and Afghanistan’s security forces have also been pounding Islamic State positions, particularly in eastern Afghanistan, where the affiliate is based.

Left: In this Jan. 15, 2019 file photo, Afghan security forces gather at the site a day after an attack in Kabul, Afghanistan. U.S. envoy to Afghanistan Zalmay Khalilzad is eager to strike a peace deal with the Taliban that would end America’s longest war, but he faces several obstacles. Afghanistan has been mired in war for decades, and while the U.S. and the Taliban have both claimed significant progress in the latest talks, they have yet to pen a deal. Photo by Mohammad Ismail/Reuters