KABUL, Afghanistan — July saw the highest number of civilian casualties in Afghanistan in a single month since 2017, the U.N. mission said Saturday.

Its preliminary findings indicate more than 1,500 civilians were killed or wounded, mainly due to a spike in casualties from insurgent attacks. It did not provide a breakdown of deaths and injuries, but said the overall number was the highest for a single month since May 2017.

It said more than 50% of casualties were caused by bombings. A roadside bomb tore through a bus in western Afghanistan on Wednesday, killing at least 32 people. A complex attack on the office of the Afghan president’s running mate last weekend killed at least 20 people. The target of the attack, former intelligence chief Amrullah Saleh, escaped unharmed. No one has claimed either attack. 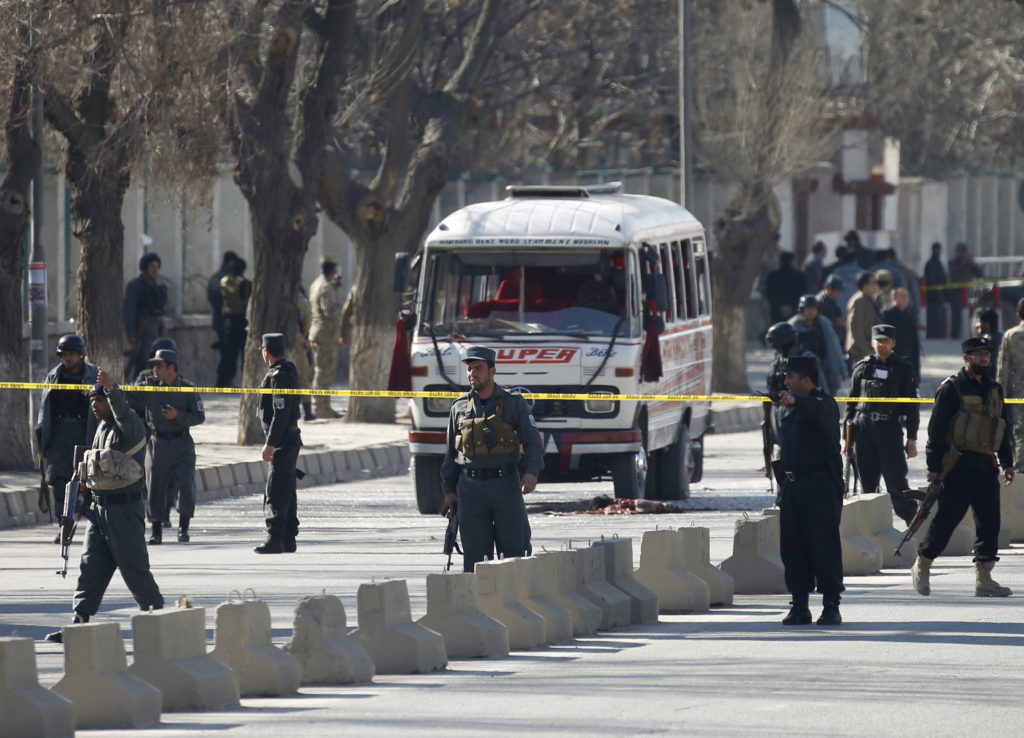 Afghan policemen stand guard around a damaged mini-bus at the site of a suicide attack in Kabul, Afghanistan February 1, 2016. Ten people were killed and 20 wounded, most of them civilians in Monday’s suicide bomb attack outside a police station in a busy area of western Kabul, Afghan Deputy Interior Minister Ayub Salangi said in a Twitter post. Photo by Mohammad Ismail/Reuters

The Taliban, who effectively control half the country, carry out daily attacks on security forces and government targets that often kill and wound civilians. An Islamic State affiliate also operates in Afghanistan, targeting security forces as well as minority Shiites.

A roadside bomb in the western Herat province killed a district chief and another individual on Saturday, according to police spokesman Farzad Farotan, who said five others were wounded in the blast. In the southern city of Kandahar, a suicide bomber on a motorcycle wounded at least eight civilians, according to provincial police spokesman Jamal Naser Barekzai. No one claimed either attack.

The Taliban have kept up a steady tempo of attacks despite holding several rounds of peace talks with the United States in recent months. The two sides appear to be closing in on an agreement in which U.S. forces would withdraw in exchange for guarantees that Afghanistan would not become a haven for terrorist groups.

“As peace efforts have intensified in recent weeks so too has the conflict on the ground,” said Tadamichi Yamamoto, the U.N. envoy to Afghanistan. “I call on all parties not to ramp up military operations thinking that doing so will give them a stronger position in talks about peace.”

On Tuesday, the U.N. released a report saying most civilian deaths in the first half of the year were caused by Afghan forces and their international allies. The report apparently referred to civilians killed during Afghan and U.S. military operations against insurgents. The Afghan government disputed the results and methodology of Tuesday’s report, saying it makes every effort to prevent civilian casualties.

Left: TOPSHOT - In this photograph taken on May 14, 2019, Afghan disabled children, belonging to Hamisha Gul family who lost their legs following unexploded rocket explosion, attend and study at a class in their house in Khogyani district of Nangarhar province. - As 10 children from the same family were walking to school last year, they came across an unexploded mortar bomb -- a common sight in Afghanistan, where war still rages between the Taliban and US-backed national forces. Not realising what it was or the dangers it posed, the curious kids picked up the device and took it to show to an aunt. And then it exploded. Photo by Noorulla Shirzada/AFP/Getty Images